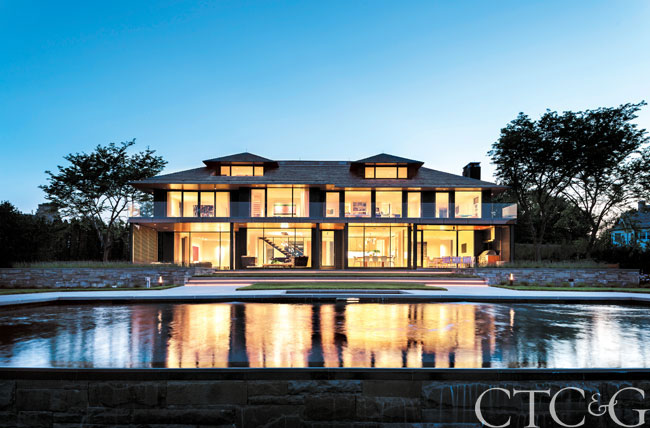 “I’m interested in this expanded field between architecture, landscape and art,” architect Joeb Moore says about this newly created glowing jewel box of a waterfront house, which he and his collaborators re-thought, re-encased and—with a few seemingly simple moves—completely transformed.

Central to the project is the fact and idea of landscape, and of the permeability of constructed boundaries between inside and outside: a topic that has engaged and infuriated homeowners, architects and landscape designers ever since the first bit of bearskin was hung over a prehistoric cave entrance. Here, Moore sees it most in the way the house moves from a front entrance framed with a wood fence and courtyard trees to a bright open glass-walled interior, and then to a series of steps down through artificial water (the swimming pool) to less artificial water (the overflow from the swimming pool) to natural water (the harbor). Buttressing that sectional and almost processional clarity are what Moore calls the liminal spaces. These include a series of covered outdoor spaces—such as the one just off the living room, separated from the landscape with a series of wood slat panes—or the way in which that slat pattern is repeated on the second-story art-covered hallway’s blinds.

The footprint of this originally traditional house stayed exactly the same, which makes Moore’s—and landscape architect Edmund Hollander and interior designer Sally Markham’s—interventions (replacing swaths of wood with glass; staining the siding black; inserting a central resin-coated block that operates as the conceptual nerve center of the house) all the more striking and expansive.

BROWSE MORE PHOTOS FROM THIS WINNING PROJECT BELOW