Crystal Head Vodka
Cause Celeb: Made in Newfoundland, Crystal Head is the brainchild of Canadian-born actor and comedian Dan Aykroyd and artist John Alexander.
Claim to Fame: Both gluten- and additive-free, the vodka is filtered through Herkimer diamonds. Take it for a ride in Dan’s ’54 Bar Car (2 oz. vodka, splash dry vermouth, splash olive brine, 2 olives, and 1 cocktail onion).

Miraval Wines
Cause Celeb: In 2012, Angelina Jolie and Brad Pitt acquired Château Miraval in France for $60 million. Now tout le monde is wondering who will get the grapes in the divorce.
Claim to Fame: Miraval’s 2013 Côtes de Provence rosé, which has red berry flavors, made Wine Spectator’s “Top 100” list in 2013. If the couple’s split is amicable, expect two promising whites to come: the floral Miraval Blanc Côteaux Varois and the fruity, spicy, and smoky Miraval Blanc Côtes de Provence.

Aviation American gin
Cause Celeb: Christian Krogstad, founder of the Portland, Oregon, producer House Spirits Distillery, made it a team effort by drafting former NFL quarterback and distillery co-owner Joe Montana.
Claim to Fame: This small-batch gin’s juniper flavor is subtle, with the spotlight being shed instead on other botanicals sourced in the Pacific Northwest:  sarsaparilla, lavender, and coriander. Go for a touchdown with the Aviation Rickey (1½ oz. gin, fresh lime juice, and simple syrup, topped off with seltzer water). 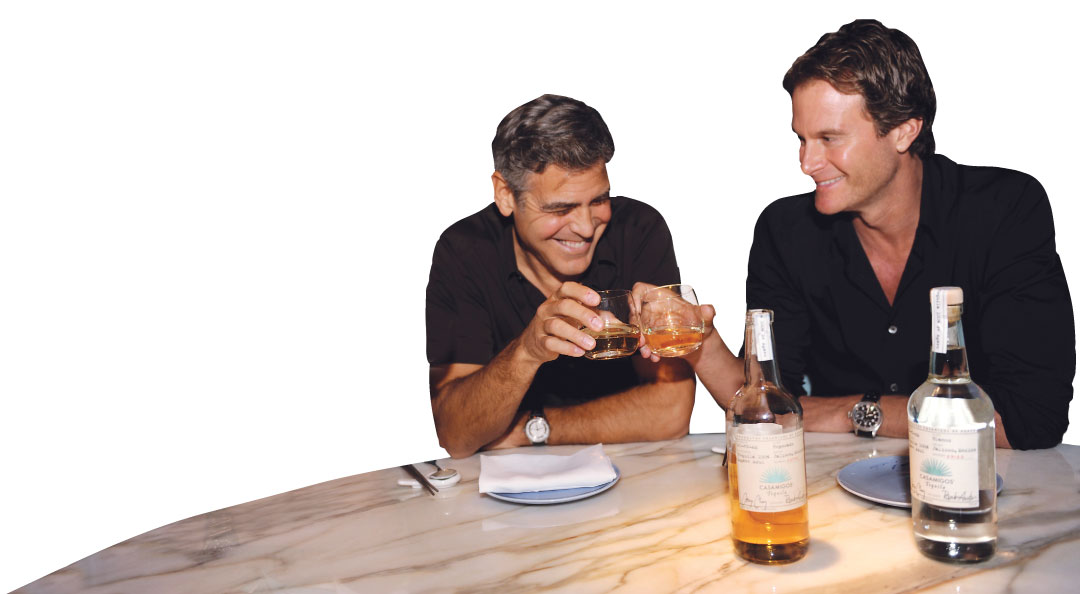 Casamigos Tequila
Cause Celeb: After a long tequila-fueled night, actor George Clooney and restaurateur Rande Gerber vowed to create the world’s smoothest small-batch tequila.
Claim to Fame: Blue Weber agaves from Jalisco, Mexico, undergo an extra-slow fermentation for 80 hours. On the rocks, by the shot, or straight from the bottle—don’t even think about salt or lime.

Barrymore Wines
Cause Celeb: Actress Drew Barrymore teamed up with the Carmel Road winery in Monterey, California, to create her own label with winemaker Kris Kato.
Claim to Fame: A crisp honeydew-flavored Monterey Pinot Grigio and Drew’s Blend Pinot Noir, which has notes of fruit and spice. The Barrymore rosé sold out this year and will return in the spring.

A version of this article appeared in the Holiday 2016 issue of NYC&G (New York Cottages & Gardens) with the headline: Star Struck.