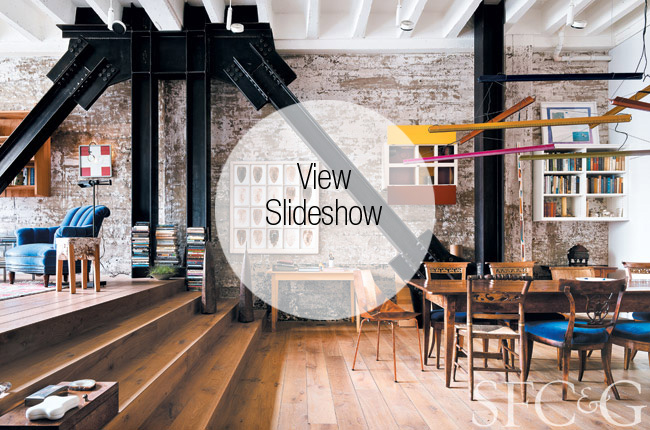 The transition from traditional residence to urban dwelling can be jarring for some, but for the owner of a newly converted loft in Russian Hill, it was a revelation. The abundant light, generous volumes and industrial materials of her dramatic new residence, sited in a former mechanic’s stable transformed by San Francisco–based firm Ogrydziak Prillinger Architects (OPA), proved to be the perfect conditions for showcasing her soulful collection of art and objects.

Known for rigorous, conceptual work, husband and wife Luke Ogrydziak and Zoë Prillinger were delighted by the opportunity to work on a nearly century-old building. “It was so important to understand its threads back into the past,” says Ogrydziak, adding that he and Prillinger thoroughly enjoyed the challenge of devising modern living spaces that would honor the building’s historic character. In the apartment, they preserved the structure’s expansiveness by maintaining the original 14-foot ceilings and allocating a voluminous, open space for the kitchen, dining and sitting area. They also retained the existing raw concrete surfaces, which lend warmth and character.

Throughout the apartment, there’s a sense of the owner’s confident, idiosyncratic eye—her ability to mix a traditional piece of furniture with an utterly contemporary piece of art or a much-loved personal artifact—and make it work in a relaxed and comfortable way. In the sitting room, for example, a vintage blue velvet chair is juxtaposed against David Ireland’s graphic Ode to Spain. In the kitchen, a custom-made display case by Federico de Vera extends the length of the wall and is evocative of an 18th-century cabinet of curiosities; it contains a quirky mash-up of objects, from pearly shells and colorful bugs to a piece crafted from a kitchen colander by Palestinian artist Mona Hatoum.

Drawn to pieces that have, in her words, “an energy that you really spark with,” her collection includes works by Yoko Ono, Janine Antoni, Bruce Charlesworth and Barnaby Furnas, as well as numerous others by friends and family. She also loves art that’s unexpected in its subject matter or materials. The gently undulating, gray-white surface of a Phil Ross stool, for example, turns out to be made from mycelium. It was developed at Workshop—a retail space and artists’ residency program located in the Dogpatch—as was the metal “chandelier” over the French country dining table, actually a composition of anodized aluminum line lights designed by San Francisco artist Johanna Grawunder.

Another unexpected delight is a work by San Francisco artist Rigo 23, commissioned for the kitchen window. Recalling the island of Madeira where he was raised, he painted the glass in hues that evoke the blue Mediterranean and then suspended wooden boats in the alley outside, so that they float in the frame of the windows. It’s a playful way, as the owner says, to have the waterfront view she had in her old home, while happily dwelling in her new urban space.

A version of this article appeared in the October 2015 issue of San Francisco Cottages & Gardens with the headline: Oil and Canvas.