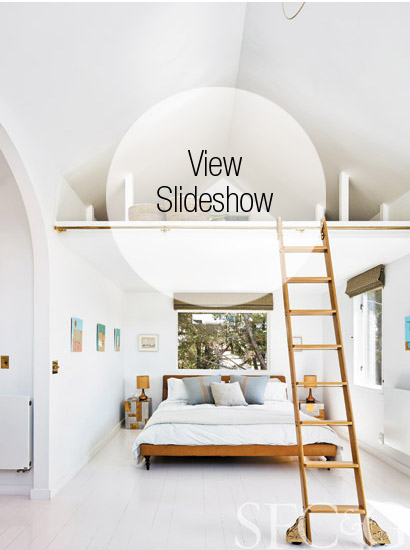 We didn’t want a pristine, untouched space,” says Anamarie “Pink” Pasdar of the 2,800-square-foot carriage house in the Mission that she and her husband, former Apple executive Iain Newton, spent more than a year renovating. “The fact that we didn’t need a car to be in the center of the action was another plus. After years spent living in New York and London, this particular house—with its funky ’70s bohemian vibe and great flow—just felt like home.”

Pasdar and Newton are art collectors, avid travelers, busy parents, cooks and hosts. His family from the U.K. visits frequently, as do the couple’s friends from around the world. So a house with communal spaces for entertaining and a guest room were requisites. After just one meeting, architect Patrick Flynn of Envelope Architecture + Design was selected to realize the duo’s vision for a home that would patina over time. “We wanted materials and finishes that would wear well as they aged—floors that would be enhanced by scuff marks, not flawed,” says Pasdar.

Following LEED guidelines and sourcing locally wherever possible, the couple also worked closely with interior designer Ilaria Ventriglia Burke to create a series of clean, bright spaces that employ natural colors and materials, as well as stark white walls that show off their collection of works by contemporary artists Banksy, Jeremy Evans and Andre Razo to brilliant effect.

In these communal areas, Ventriglia Burke (“an incredibly definitive, Neapolitan decision-maker,” says Pasdar) was able to help the couple incorporate the furnishings, art and mementos gathered from their far-flung adventures. The dining room is a perfect case in point: Floors made of reclaimed wood from an Oregon hops factory coexist with a Milo Baughman table and an eclectic conglomeration of cocoon-like Hannes Wettstein leather chairs by Cassina, as well as with Shaker-esque wooden versions by Britain’s Ercol. Playful 1920s-era crystal chandeliers cast a gentle glow throughout the space where, as Ventriglia Burke points out, “every piece tells a story, and the room is a total mirror of who they are.”

In the lofty master bedroom, it’s all about the high-low mix: A pair of locally made chairs comfortably coexists with Paul Evans side tables of inlaid wood and mirror. An old Sherwin-Williams paint sample board-cum-installation makes for an unexpected centerpiece, while the original fireplace—complete with a disco ball rumored to be from Studio 54 and given as a birthday gift by Newton to Pasdar—adorns the hearth. Artworks include prints from San Francisco gallery Ratio 3 and a series of small, abstract works by Andre Razo that hang next to the minimalist, Matthew Hilton-designed leather bed frame. A ladder serves as functional objet d’art leading to a loft-like storage area above.

A respect for the original structure and its materials carried over to the kitchen where warm bay-laurel floors and gray soapstone and granite countertops set a practical-yet-sleek culinary stage. Even the stairs have stories to tell, and each serves as a gallery for photographs, drawings and prints. “One staircase was stripped down to its original, acid-green paint,” says Ventriglia Burke. “We initially tried to find a runner to cover it, nothing was as beautiful as the original, worn wood.”

A version of this article appeared in the October 2015 issue of San Francisco Cottages & Gardens with the headline: Mission Statement.