A gorgeous Connecticut property with lush gardens to match. 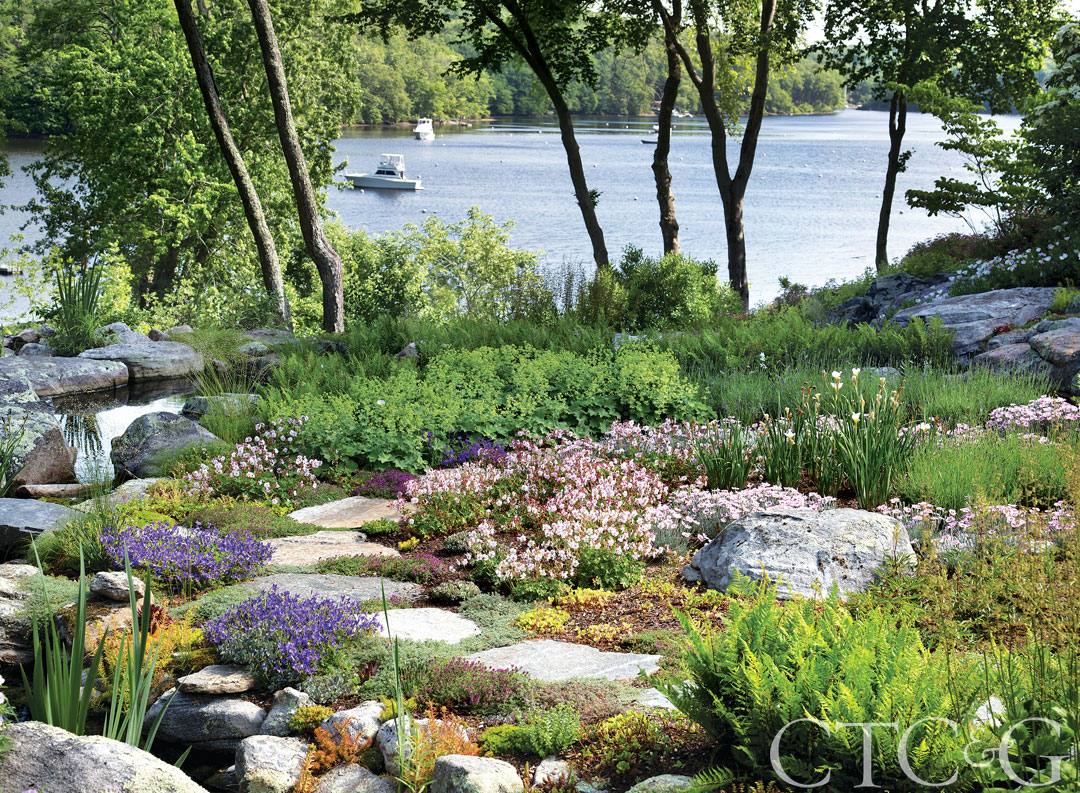 Photographs by Caryn B. Davis

That expression about being able to see the forest for the trees assumes real meaning for the owners of a stunning cove-front property near Lyme. When a husband and wife bought this 18-acre parcel of land, it was heavily wooded, yet they were already able to “see” some of the gardens and lawns they hoped to create. “We had a strong vision for the property,” the husband explains. “We saw through those trees, and we even planted perimeter trees and foundations for the garden before we started building the house. We had a lot of ideas, but it took Peter Cummin, the landscape architect, and Josh Novak, who planted every bulb and tree, to realize them for us.”

In addition to working with clients who had an inspired vision, the other asset in abundance was the land itself. “This is simply one of the best sites on the whole East Coast,” says Cummin, whose designs included an organically shaped pool; a meditative rock garden that appears, at once, natural and geometric; and a rectilinear water garden that appears to flow, metaphorically and actually, from the expansive house itself. “It’s the best piece of property seen anywhere in Connecticut,” he adds.

The wife wanted a rock garden that, as Cummin describes it, would be a “contemplative” destination. “What we made looks natural—a difficult effect to achieve,” he says. Sizeable expanses of local stone were assembled in such a way that the outcroppings appear endemic to the land while also configured in a deliberate pattern. Cummin designed a water system that flows subtly among the rocks, and he chose a variety of plantings, the most conspicuous being ferns. “Ferns are key to this garden,” he notes. “They grow like crazy and deer don’t feed on them.”

“The prevailing idea with the rock garden was to create a reason to be there and to enjoy the view to the water once you do get there,” explains the homeowner, who admits to not being a hands-on gardener but, rather, someone interested more in the mood created by plantings. “I’ll be honest, I don’t really care what a particular plant is—I’m totally happy to have the landscape architect and my wife pick them out. I’m a photographer. I’m more about the aesthetics.”

The print version of this article appeared with the headline: Dream Big.