A Big-Box Developer Could Still Swoop In in Bridgehampton 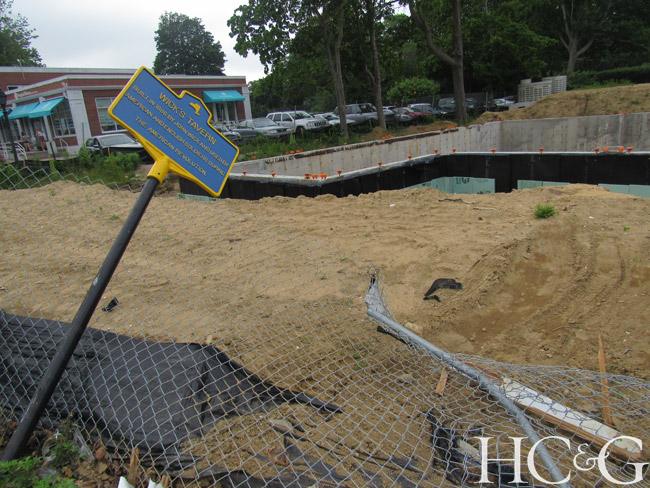 Things are looking spiffy at the Nathaniel Rogers House on the corner of Montauk Highway and Ocean Road in Bridgehampton, with the final renovation phase of the historic Federal/Greek Revival hodgepodge—the new home of the Bridgehampton Historical Society—slated for completion by July 4, 2017. The view is a bit muddier, however, across the street, where a big brown hole still sits on the site of what was supposed to be a CVS—once the home, during the Revolutionary Era, of the historic Wick’s Tavern. “There has been no activity since October 9, 2014,” says Southampton Town Principal Planner Clare Vail. That’s when the town planning board unanimously approved the need for an environmental review of the property before green-lighting BNB Ventures IV–CVS Caremark’s proposal to build a 9,030-square-foot pharmacy and convenience store on the site. CVS filed a lawsuit in New York State Supreme Court, stating that an environmental review was not needed, and then abruptly dropped out of the project altogether in late May. Developer Paul de Kanavos did not return calls for comment, while CVS public relations director Michael DeAngelis confirms that “our lease agreement for the Montauk Highway proposal was terminated. We have no comment at this time on our future plans in Bridgehampton.”

According to Leonard Davenport, a member of the Bridgehampton Citizens’ Advisory Committee and Save Bridgehampton Main Street, a big-box developer could still swoop in. “The permit is still valid,” he says. “A building could start going up any day, perhaps just as bad or even worse than a CVS.” Among Davenport’s camp, hopes are running high for turning the lot into a public green space or a half-green/half-low-impact hybrid development.

As for CVS, who knows? Perhaps a Bridgehampton branch will pop up just a bit farther west. A 13.3-acre parcel across from Bridgehampton Commons, known as the Konner Development, is proving to be an easier pill for most people to swallow. The site plan, zoned for a mix of business and residential use, calls for 12 farmhouse-style buildings totaling 90,000 square feet of commercial space, anchored by an Equinox gym, and 28 residential apartments in a pastoral-type setting designed by landscape architect Tim Rumph of Southampton-based Araiys Design. Public benefits will include pasture fronting the highway, walking trails with views of Kellis Pond, a beech forest, a fountain, and an on-site, state-of-the-art wastewater treatment facility. “There is one very large 15,000-square-foot building fronting Montauk Highway that’s slated for the west side of the development,” says Bridgehampton Citizens’ Advisory Committee co-chair Nancy Walter-Yvertes. “It’s got fabulous parking and is zoned for a pharmacy. You can draw your own conclusions.”

Southampton Town Supervisor Anna Throne-Holst, who has advocated for the development for several years, recalls “dusting off some plans that had been looked at ages ago” and getting residents involved in the design process. “It’s a wonderful example of a community working with a planning authority, in this case the town, to understand the needs and best use of a crucial piece of property,” she says, adding that the town board will vote on the Konner proposal by October, after traffic studies and a public review have been completed.