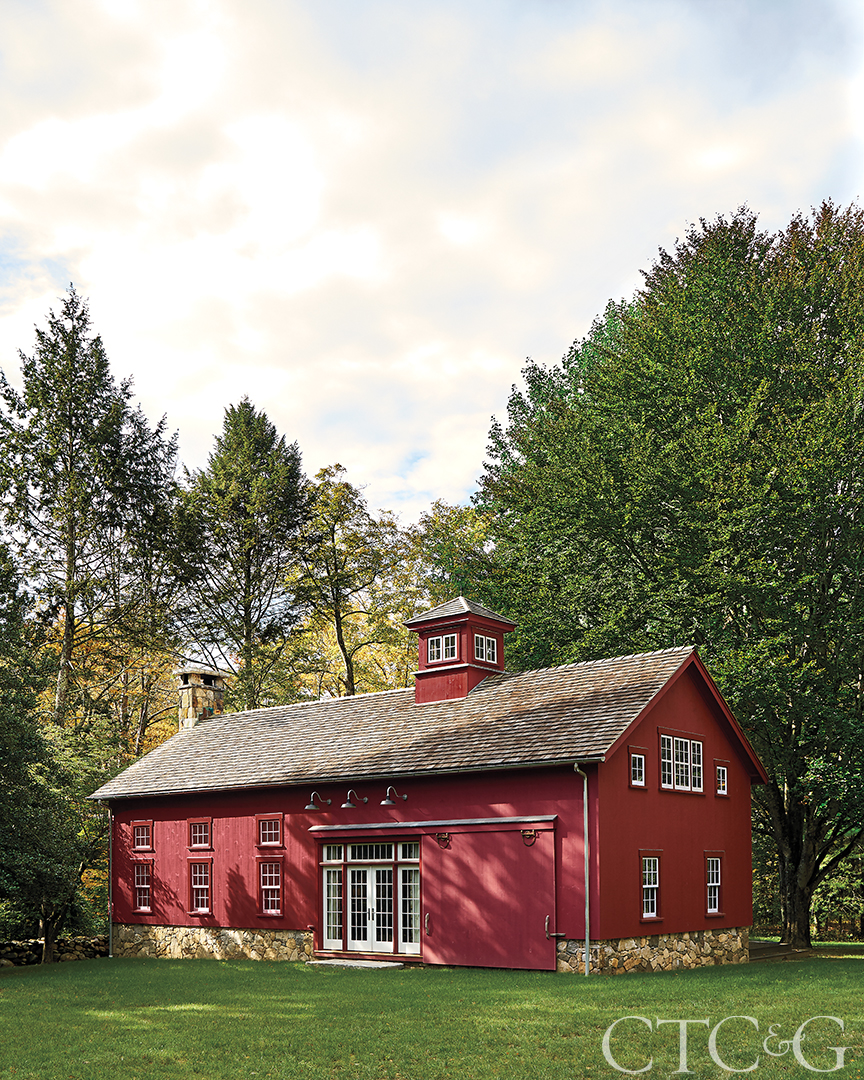 A restored 1850s barn presents a traditional silhouette with its red shiplap siding and cupola-topped roofline. The mahogany-trimmed windows and doors add a modern touch. “Barn houses have a certain energy that makes you feel like you’re stepping back in time,” says Edwin Cady Jr. of East Coast Barn Builders. Photographs by Joshua McHugh.

The concept of a “staycation” has taken on new meaning during the pandemic, as homeowners seek to enhance their properties with resort-style comforts and amenities. Such was the case for one New York City couple with a weekend house in Litchfield County when they decided to turn the property’s 19th-century barn into a separate entertaining space for family and friends. To help achieve their vision, they hired interior designer Philip Gorrivan, who worked on the couple’s historic home, a classic New England Colonial, for its previous owners. “The barn was pretty dilapidated,” says Gorrivan. “It was either tear it down or do a complete restoration.”

The homeowners have a penchant for architecture and the region’s storied past, so they chose the second option. They hired architect Paul Hinkel to draw up plans, and Edwin Cady Sr. and Jr., the principals behind East Coast Barn Builders, to manage the restoration, which involved moving the barn closer to the house to save a copper beech that had grown around one of the corners. Cady and his crew built a new foundation of local stone, repurposed the original beams and used weathered boards throughout the interior. Floors are random-width white oak, and the lofty ceiling is finished in pine. 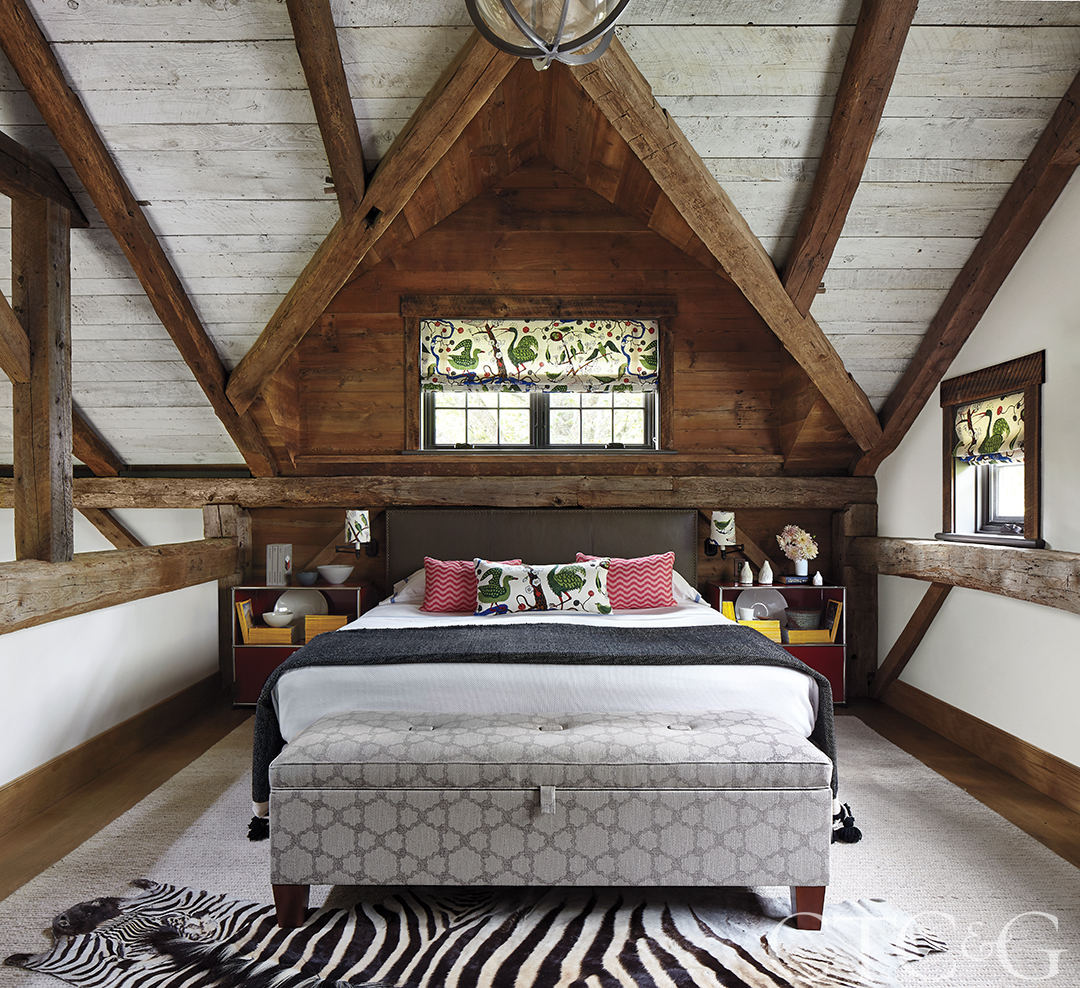 In the bedroom, a Baker bench cozies up to a Savoir bed, which is dressed in Matouk linens. The Josef Frank fabric for the Roman shades is from Svenskt Tenn. A Marc Phillips rug is topped with a cowhide from Putnam & Mason. Photographs by Joshua McHugh.

When it came time for the interiors, Gorrivan took his inspiration from a variety of barn styles typical of New England. “I wanted it to have a timeless country feel and still fit into the Connecticut landscape,” he says. Indeed, from the outside, the red-sided barn has a familiar silhouette. Inside, however, the look is modern and fresh. The layout is designed for maximum efficiency: The open floor plan encompasses a living and dining area and a large functional kitchen. “That was important. The husband loves to cook,” says Gorrivan. “He has a garden on the property. He loves to pickle things.” Upstairs, there is a loft guest bedroom and a kids’ playroom, each with its own staircase.

“We were working within a limited amount of space,” the designer says. “Obviously, the ceilings are soaring, but it was important to optimize everything. In a space like that you have only so many opportunities to get it right.” Case in point: the large custom Baker sofa that anchors the seating area in front of the fireplace. “We measured it so many times to make sure it would fit the space … perfectly,” he adds. Other pieces that were selected for their functionality as much as their design: the midcentury console beneath the French mirror in the entry area and the custom wood dining table and woven leather chairs. “Every item we picked was incredibly well thought out.”

The designer mixed pattern, texture and color to maintain cohesiveness while “introducing the unexpected where possible.” The bathroom is spacious enough for a large tub plus a shower lined with subway tile, while the heated floor is Belgian block, “which is really soft and pillowy underfoot,” according to Gorrivan. Many of the accessories and decorative items were sourced during a Parisian buying trip. “We had so much fun,” the designer notes. “In fact, we were having so much fun with the barn project, they said, ‘let’s put in a pool house.’” 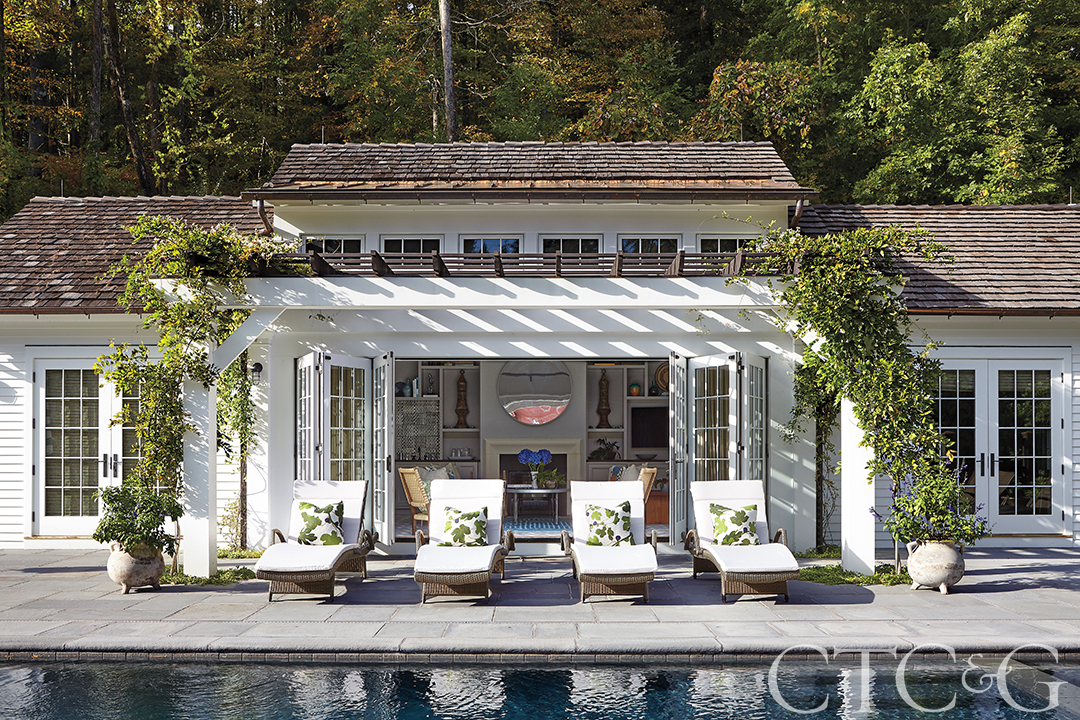 Set well away from the main house and the barn, the new pool house has a breezy, relaxed vibe. On one side is a game room with a pool table, on the other is a small but well-equipped gym. In the middle is a sunlit sitting area that opens onto a trellis-shaded patio. “I wanted the pool house to be its own destination,” he says. “You could be anywhere—Wales, Sweden, Vermont or Litchfield County. That’s the magic of interior design. It’s very transformative.”

The print version of this article appears with the headline: Ultimate Retreat.
Subscribe to C&G

This article appears in the November 2021 issue of CTC&G (Connecticut Cottages & Gardens).