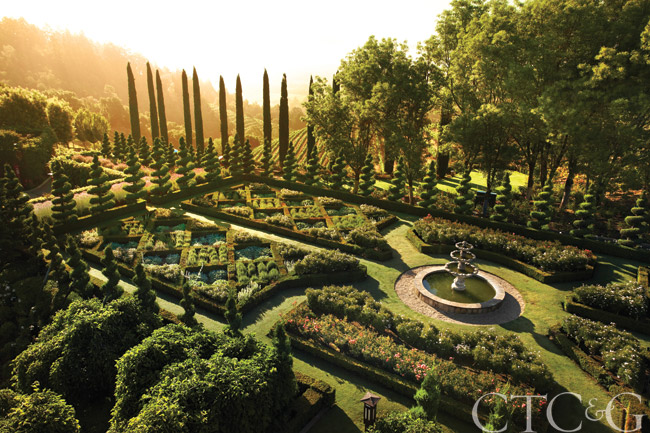 Veering off the flat Napa Valley wine route in St. Helena toward Spring Mountain, I ascended a steep, winding road. White rose bushes accented the drive leading into the Newton Vineyard estate—560 mountaintop acres on Spring Mountain’s southern slope. Perched 500 feet above sea level, 12 tall Cyprus trees flank the entrance. Here was Napa’s best-kept secret, a rooftop English garden. Gazing up to the estate’s highest point along the ridge, I spotted the single 100-foot-tall pine tree (dubbed Pino Solo) amid vineyards that are reputedly the steepest planted in the U.S.

Why does this formal English garden exist in Napa Valley? Its original owner, Peter Newton, grew up in Sussex, England, and designed the parterre garden in 1977 with boxwood diamonds, hedges and rows of dwarf dark blue and white lavender. A series of 60 Juniper corkscrew topiary bushes are the most prominent feature, along with many varieties of roses and fruit trees.

Beyond the attraction of the formal garden at this mountain estate—tours are by appointment—Newton Vineyard has hot-off-the-press news. Robert Mann, one of the world’s foremost Cabernet Sauvignon experts, has been hired as winemaker. At his previous winery, Australia’s Cape Mentelle, Mann held an annual international Cabernet tasting, where wine critics analyzed the characteristics of the variety when grown in optimal terroir all over the globe. And Mann even has a pioneering pedigree: His grandfather, winemaker Jack Mann, put Western Australia on the wine map.

While Newton Vineyard has been long celebrated for its opulent Unfiltered Chardonnay, it has yet to be recognized for Cabernet Sauvignon. Mann plans to raise the profile of Newton’s Cabernet brand called The Puzzle, made from grapes sourced at estate-owned vineyard sites on Spring Mountain, Mt. Veeder and in Yountville. “I came here because I saw the potential of these vineyards. The best Cabernets come from one percent of the world, from small parts of western sides of continents, all with similar mild, dry Mediterranean climates,” Mann notes. “My favorite Napa Cabernets—Joseph Phelps’ Insignia, Dominus, Mayacamas and Spottswoode—all have a restrained, structured elegance. I want to give The Puzzle that precision of structure and draw out the nuances from our mountain vineyard fruit.”

In Newton’s cellar, we tasted 2014 vintage from vineyard lots in barrels. “Yountville fruit brings tobacco and chocolate notes, plushness, soft tannins and adds roundness to the blend,” he said. “Spring Mountain grapes contribute the feminine tannins. The vines are 35 years old, and some parcels have volcanic ash soil, which brings perfume and an aromatic lift to The Puzzle.” We moved on to Mt. Veeder, which delivers structure, smoky charcuterie notes and cassis flavor. Mann is blending 20 blocks of Mt. Veeder, 30 blocks of Spring Mountain and 7 blocks of Yountville—piecing together The Puzzle and perhaps creating another iconic Napa Cabernet.

A version of this article appeared in the May 2015 issue of Connecticut Cottages & Gardens with the headline: Newton's Lawn.