A Celestial Retreat on St. Lucia Reaches for the Stars 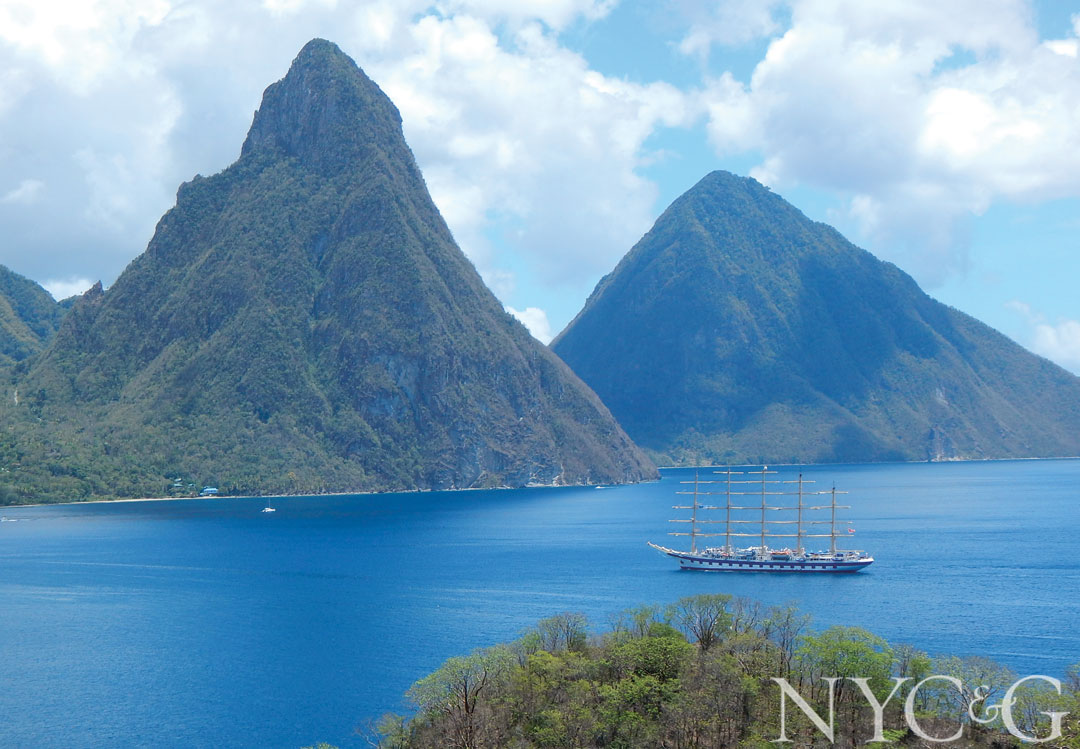 Fans of the pedestrian early-1980s TV series Fantasy Island (please withhold judgment—I happened to love it) couldn’t get closer to the real thing than St. Lucia’s Jade Mountain. Unlike Fantasy Island’s guests, however, I did not arrive by seaplane or even by helicopter on Jade Mountain’s private helipad, but by commercial airliner at St. Lucia’s Hewanorra International Airport. There, a gentlemanly cabdriver named Kenley picked me up and drove us along St. Lucia’s bumpy, rollercoaster hills till we arrived at the resort, where an army of utterly polite and professional staff were waiting to greet me. Bentley handed me a cool towel and a refreshing drink made with lime juice, grenadine, soda, and a sugarcane stir stick, and then Teclis the majordomo showed me around my roomy, luxurious suite. Who needs Mr. Roarke and Tattoo? 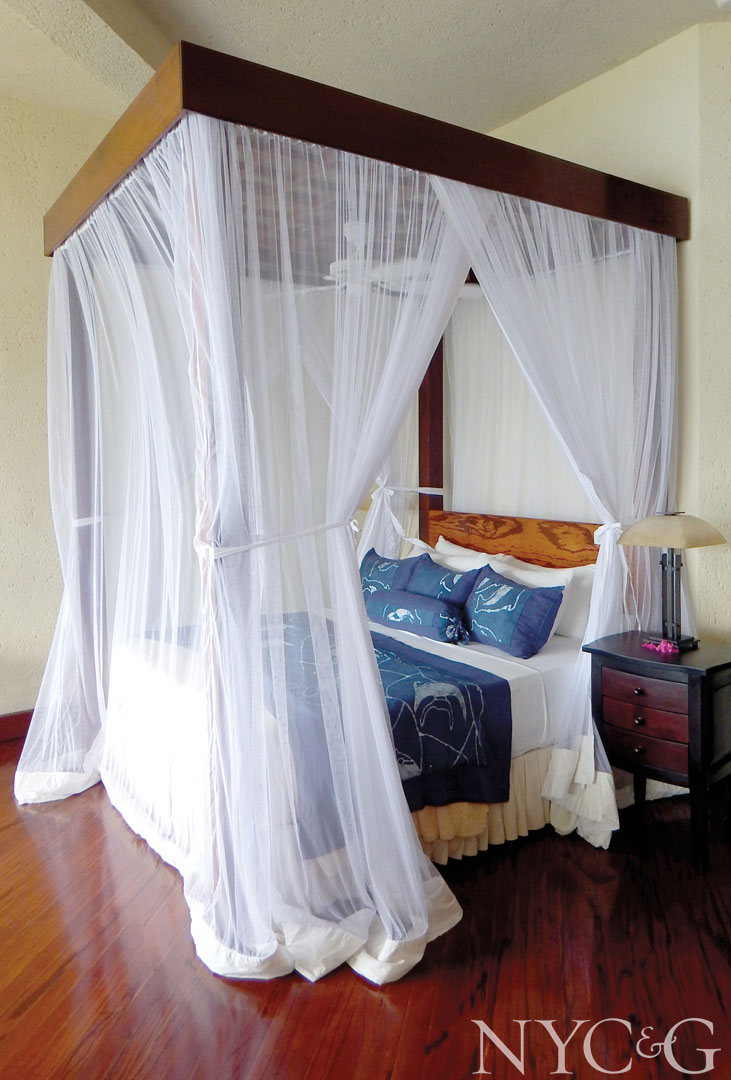 The real fantasy part comes next. St. Lucia is famous for the Pitons, the pair of sugar-loaf mountains that punctuate the southwestern edge of the island and virtually every postcard the country has ever produced. They are mesmerizing, the kind of thing a person could stare at for hours. And in my suite, which featured a private infinity pool and one completely open wall framed by rock and concrete, all I could see were the Pitons and the Caribbean Sea below—nothing else. I was so dazzled by the view, I failed to notice the sweet little Lesser Antillean bullfinch that had flown into my room and promptly gnawed away at my drink’s sugarcane garnish, like a woodpecker on a tree.

Jade Mountain is the brainchild of its owner and architect, Nick Troubetzkoy, and his wife, Karolin, who also run the adjacent Anse Chastanet resort, which comprises a series of charming cottages tucked into the steep mountainside that leads down to two beaches, shared by both properties. While Anse Chastanet is closer to the water, Jade Mountain is closer to the stars, even boasting a “Celestial Terrace” on its rooftop for cocktails at sunset and, when it gets dark, nothing but vast black sky. 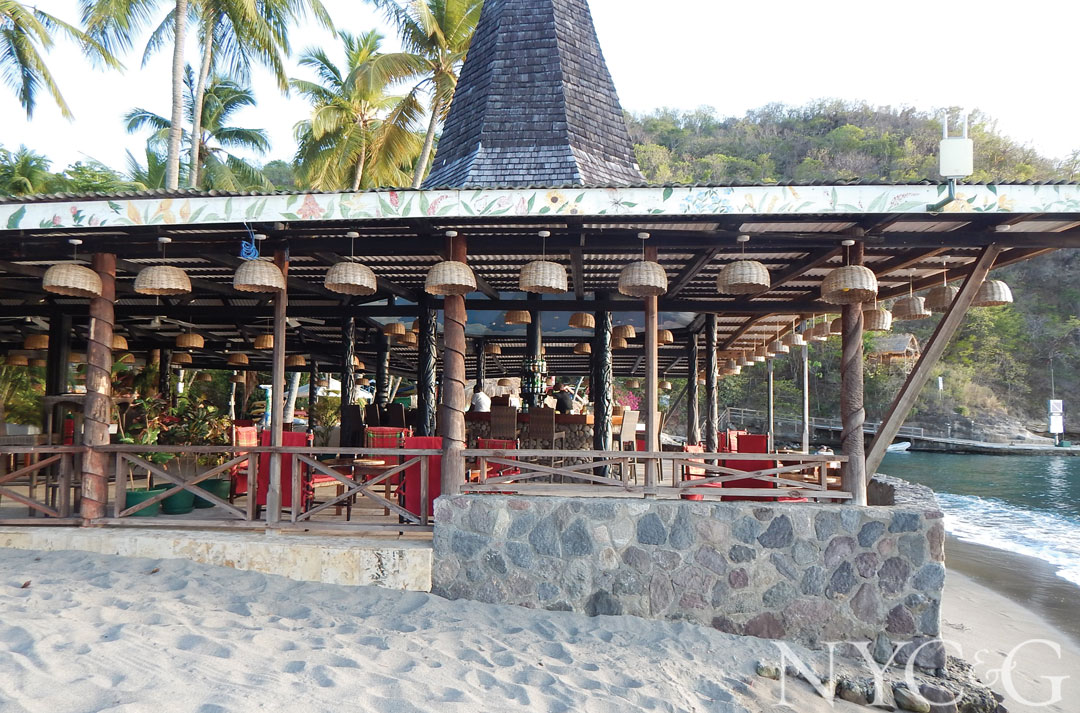 Jade is known as the “stone of heaven,” and therefore a fitting moniker for a resort seemingly built by miracle, so steep is the site it sits on. Its 29 suites, called “sanctuaries,” are essentially stacked in rows on top of one another, so each can take in the full-on view of the glorious Pitons. Even though it is now 10 years old, Jade Mountain is still a sight to behold, its captivating po-mo architecture an agglomeration of concrete, stone, rebar, and colored glass, with seductive catwalks connecting suites to the resort’s common areas, restaurants, and paths down to the beach. Because the elevation is so precarious, little excavation was done, and most everything was built by hand, using materials native to St. Lucia, although some of the wood in the suites is from Guyana, and the coral pavers on the walkways are from the Dominican Republic. (St. Lucia’s dark volcanic soil is too hot underfoot.) As for the whimsical recycled-glass accents, by artisan David Knox, they seem to change hues constantly as the sunlight plays off them all day long. 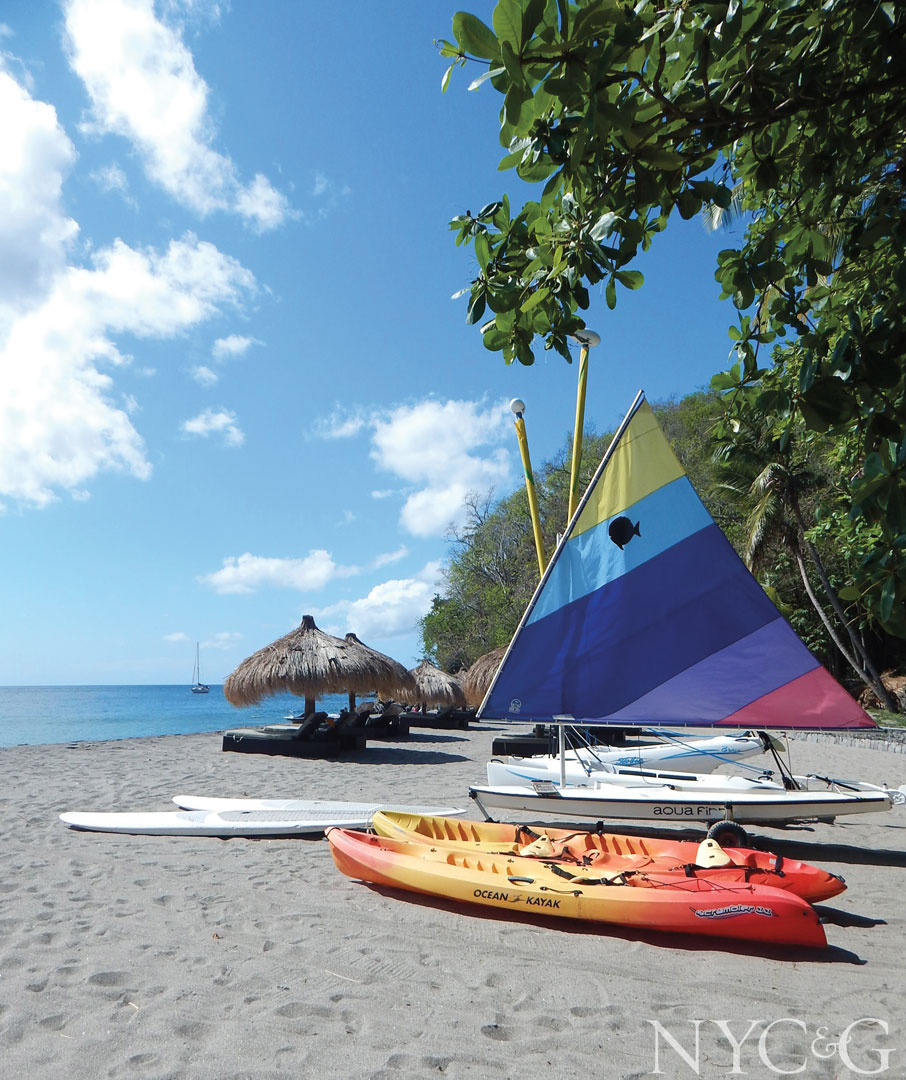 One level below the Celestial Terrace, the Jade Mountain Club restaurant proffers an ambitious, stellar menu, particularly considering how difficult it is to get top-notch ingredients to a tiny speck in the middle of the Caribbean. (The Troubetzkoys also own the nearby Emerald Estate, a farm and cacao plantation that provides local produce and all the chocolate served at the resort.) In this open-air, dreamy dining oasis, you can get a perfectly made Gibson martini, or opt for a more “local” quaff made from rum, banana liqueur, orange Curaçao, orange juice, nutmeg, and bitters, before tucking into scallop and shrimp ceviche with watermelon, grapefruit, and lime oil and tarragon-seared mahi-mahi with braised pumpkin. These are dishes to savor, to linger over, while looking out at the stars and the shadowy outline of the Pitons. 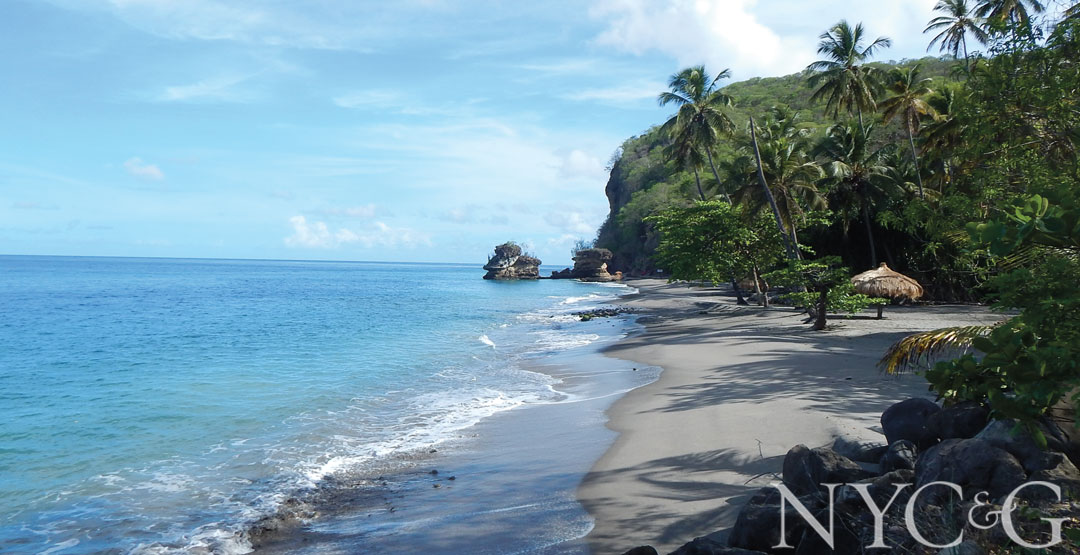 Because I cannot resist things like salted caramel custard with raspberry sorbet and cocoa-nib biscotti, I knew I couldn’t get away with lolling at the beach all day long, although the temptation was certainly there. Fortunately, Jade Mountain and Anse Chastanet offer numerous water sports, as well as jungle biking and hiking excursions on the 600 acres of land behind the adjacent Anse Mamin, where ruins from a sugar plantation dating from the French occupation in the 1700s still stand. One morning, the resort’s brick-solid trainer, Jayy Christopher, a former Olympic boxer, put me through my paces as we alternately power-hiked and sprinted up Tinker’s Trail, a dizzying mountain-biking trail created by world champion biker Tinker Juarez, a native St. Lucian. For those who make it to the top, the tradition is to ring a bell installed at the summit while savoring the staggering view. Not to be overlooked, though, are the verdant botanical wonders lining the forest trails below, including poinciana, calabash, tamarind, tulip, mango, and breadfruit trees, as well as wild ginger, heliconia, cacao, and bamboo. Located near a reservoir, the ruins of the sugar mill and the crumbling quarters of the mill master—gingerbread trim still shockingly intact—are stark, depressing, important reminders of the island’s violent slave trade. (Slavery was abolished on St. Lucia in 1838, although indentured servitude was in practice until 1917.) 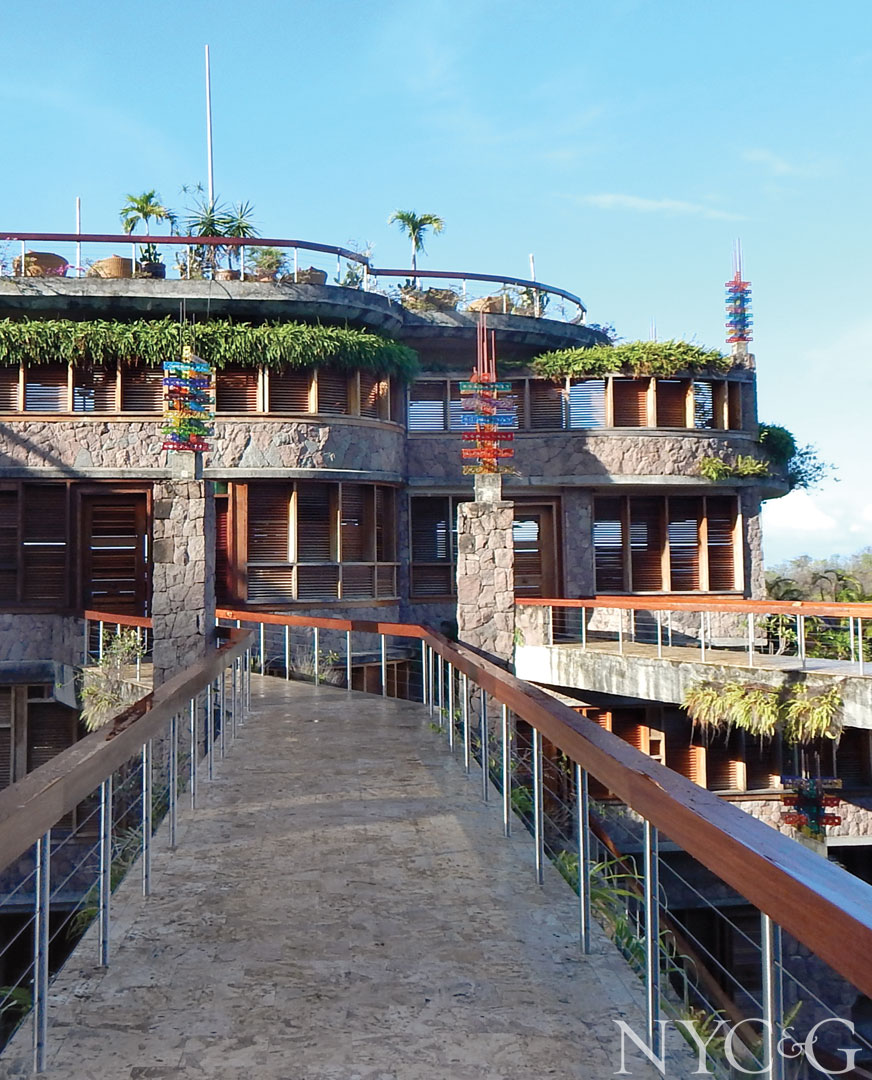 After we emerged from the jungle, Christopher and I watched five men fishing “the old-fashioned way,” from a canoe. Only one man can be seated, running the motor, while the other four must stand, performing a delicate balancing act to avoid tipping over. To attract fish, they dipped dried palm branches into the water, rippling the surface and then quickly netting their catch. Seeing them at work made me deeply appreciate my lunch at Anse Chastanet’s beach restaurant, where I devoured rare seared tuna with green papaya slaw and tamarind dressing and considered my good fortune to be enjoying such a heavenly day. Anse Chastanet’s staff will happily call a buggy to bring guests back up the hill to Jade Mountain, but I preferred to walk the 235 stairs, “straightaways,” and 174 half-stairs back to my private sanctuary. I felt like I needed to earn the privilege.

A version of this article appeared in the March 2017 issue of NYC&G (New York Cottages & Gardens) with the headline: Jade Mountain.