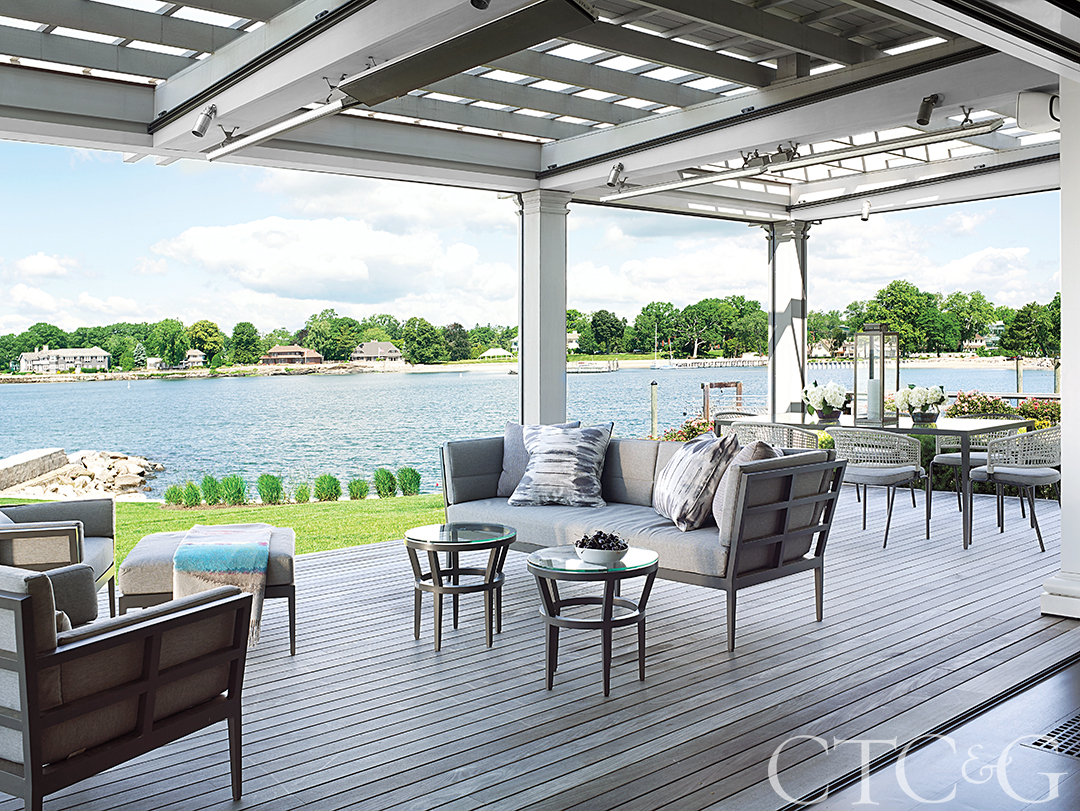 With their three grown daughters out of the nest, one coastal Connecticut couple decided it was time to start fresh. They bought a 1970s-era Colonial in a private waterfront community not far from their home of 25 years. Their goal was to build a modern house with an open floor plan and a setting that maximized the view. “My husband was out riding his bike one day and happened upon an open house,” says the wife. “The property was really nice, and we saw the potential to build something special.” 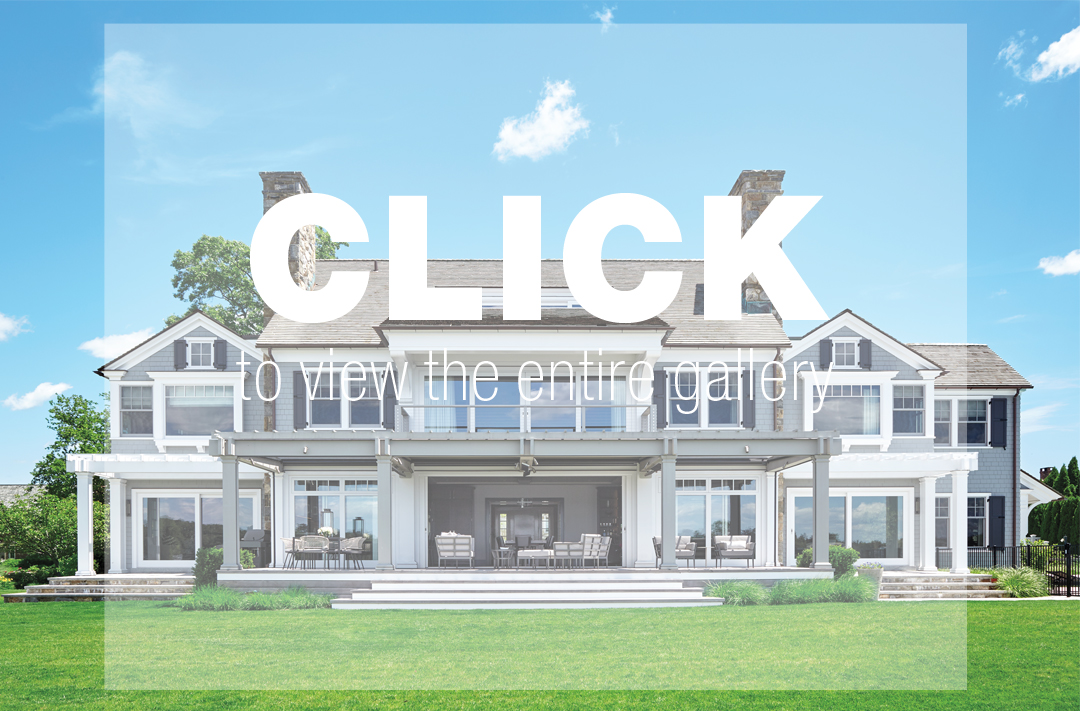 The couple hired architect Krist Dodaro and interior designer Marisa Bistany Perkins, who frequently collaborate on residential projects, to bring their dream to life. The biggest challenge was finding a way to satisfy the neighborhood’s design board review process, which calls for a mid 17th-to-18th–century Colonial silhouette, and still give the homeowners the modern look they craved. With this in mind, Dodaro split the difference—the front of the house is more restrained and traditional, while the back of the house incorporates an expansive use of glass to take in the spectacular water views. “We worked hard on the front and the scale of the house,” says Dodaro. “The wings on both sides of the main box step down slightly, the roofs are lower and then lower still on the garage. That helps it have good street manners.”

To meld the two sides together and keep it from being “stylistically disconnected,” the architect kept the exteriors clean and simple. He incorporated classic details such as dormers, gables, a pair of stone chimneys, and “the idea of a crown molding. These elements are deep-seated in our architectural consciousness,” says Dodaro. “They immediately evoke a style we are comfortable with.”

Because of the home’s waterside perch, the wife initially envisioned a predominately sand and beige-hued interior. But she didn’t care for the way the way the beige looked after doing two rooms and instead gravitated toward several gray samples Perkins recommended. From there, the design scheme evolved into an all-gray palette. “To give the rooms dimension and depth, I knew I’d have to layer in a variety of textures and fabrics,” says the designer. She also added interest through strategically placed pops of purple.

In the 20-by-40-foot great room, “the goal was to create a sophisticated and sleek but really inviting space,” Perkins says. A swivel chair’s wooden back and sides are a striking contrast with the textured fabric on its front. A pair of throw pillows on the velvet sofa shimmer with hints of gray and purple. The custom dining table was made by a California artisan and is inlaid with wood and oxidized metals. “When you walk into the room you see the top of the table, and it’s like a piece of art,” says Perkins. Throughout, the stained hardwood floors are softened with plush area rugs. “The client wanted all the rugs to be very cushy underfoot,” notes Perkins. “Every time we went into a carpet store, shoes came off.”

In the kitchen, a metal and tile backsplash has a “cool industrial vibe.” The Christopher Peacock cabinetry sports ostrich-leather wrapped door handles, while the counter stools are covered in faux gray leather and trimmed in black. The metal theme carries over into the first-floor powder room with its hammered-metal sink, faux metal Phillip Jeffries wallpaper and purple ceiling. “It’s one of my favorite rooms I’ve ever done,” says Perkins. “It’s so fun and funky and has a glam Hollywood feeling to it.”

Perhaps the space that speaks most to the home’s swoon-worthy setting is the expansive deck off the great room. Thanks to a pair of nine-feet-wide glass pocket doors, the living area opens to the outdoors seamlessly; an automatic screening system provides protection from the wind and sun, while overhead heat lamps warm the space in the cooler months, creating a true three-season living area. “We feel like we’re on vacation all the time,” says the wife. “We were recently in a villa in the south of Spain, and we said this is no better than our home.” But the best part? “Our daughters love to come visit.”

A version of this article appeared in the October 2019 issue of CTC&G (Connecticut Cottages & Gardens) with the headline: Gray Matters.