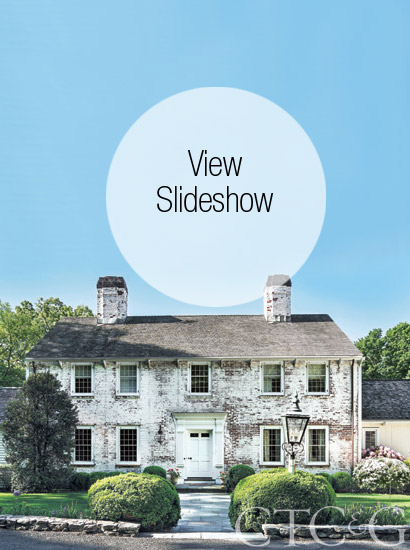 After 15 years of corporate assignments abroad, Tricia and John Hartner felt a strong desire to return to their Connecticut roots. Inspired by a four-year residency in England’s legendary New Forest, they fell for a spacious Wilton property that had the potential to be equally entrancing. Set along a winding road, nestled among eight promising acres overlooking Pope’s Pond Reservoir, Branch Brook Farm, a 1968 Colonial Revival designed by renowned American architect Royal Barry Wills, was an unquestionable score in need of an update.

There was plenty to love, yet much to improve upon. Tricia was immediately smitten with the land, the elegant whitewashed facade, original moldings and some of the cozy interior spaces. The back of the home, however, was completely lackluster inside and out, and bore no relation to the front’s stylish charm nor to the spectacular scenery. The Hartner’s vision was simple, “We wanted to amplify the graciousness, utilize the space better, and take advantage of the views.” Their search for an architect led to Dinyar Wadia.

At first, Tricia and John were doubtful that the esteemed New Canaan–based designer would take on their relatively modest project. Once they met, however, it became evident that Wadia’s interest was intrinsically woven to the soul of the project and not to its size. Fortunate to be trusted with the task of elevating the home to the next level, Wadia says, “Renovating and adding to a house such as this is always challenging. On the one hand, you want to maintain the charm, and on the other, you want to add all of the modern-day comforts that clients now expect in their homes.”

The rebirth of the house balanced preservation with gutted spaces, cosmetic refinements and additions. The family room, an homage to the English glass conservatory, was new construction. Compelling from every angle, the room’s soaring 16-foot apex and soft neutral palette make it supremely airy, while a working hearth and plush Tibetan rug assure warmth. The master suite and kitchen were both enlarged and extensively reconfigured. “As with many older homes,” Wadia notes, “the spaces that are important to us now were tiny.” The kitchen was tripled in size to include a pantry and breakfast room; and the cathedral ceiling-cum-eyebrow window and a row of casements maximized natural light and the view.

With the first major wave of construction completed between summer 2007 and spring 2008, Tricia could finally commandeer the decorating. Interior design had been a lifelong passion and after making over a handful of homes and being exposed to a world of craftsmanship, she pursued it as a career, and learned skills such as drafting and lighting that would make her better at it. The Hartners’ home is filled with eclectic artifacts collected from journeys in Asia and Europe.

When the project was nearly done, Tricia was diagnosed with lung cancer, and it was at this point that the house’s true purpose, as a gathering place to celebrate joyous moments and help support during more challenging times, was revealed. When John traveled, friends could stay over comfortably. “I had a friend,” Tricia explains, “who loved my kitchen and made an amazing pasta dish that I swear had special healing properties.” During treatment, Tricia was grateful for simple joys like coffee on the patio or glimpsing the colorful perennial gardens from the window. She gauged her recovery by how long she could tend the garden.

The Hartners are now empty nesters, and the property—the site for Thanksgiving dinners, sledding parties, birthdays and an array of farm animals—is much quieter. Tricia remains an avid gardener, has taken on beekeeping, and continues to work on new design projects. John loves ending days in the vegetable garden or by the backyard fire pit that he built. A concerted team breathed fresh life into an old house, and all feel invigorated because of it.

A version of this article appeared in the September 2015 issue of Connecticut Cottages & Gardens with the headline: The Manor Re-Born.