A Contemporary Barn Designed in an Earthy Palette 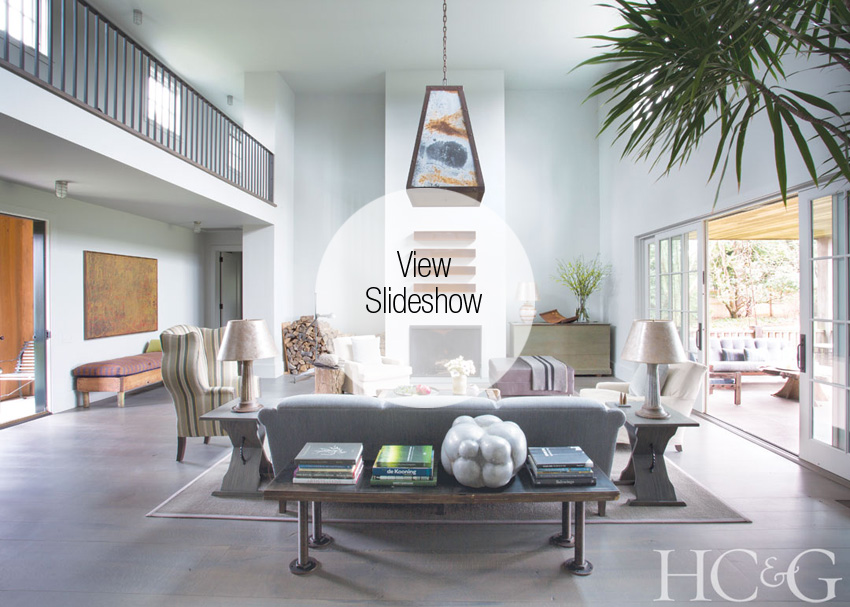 When Walter Bobbie and David Frye decided to build their dream house in Water Mill, they didn’t have to go far to find a designer. Frye and decorator James “Ford” Huniford grew up together in Syracuse, and all three men were already good friends. The Tony-winning Bobbie and the Grammy-winning Frye had had places on Long Island for years, the latest a cottage in East Hampton Village, but building a place of their own had long been on their to-do list.

“As soon as we saw the property, I knew we should buy it,” says Bobbie, whose Broadway career ranges from acting in the original production of Grease to directing the current musical Bright Star. “It backed onto a 30-acre tree nursery,” adds Frye, a tenor who has spent most of his career at the Met, “and it had great, mature trees that you could never buy.”

There was a century-old house on the grounds, but it was too far gone to restore. It did, however, boast a theatrical pedigree, having belonged to costume designer Florence Klotz and producer Ruth Mitchell. “A legion of theater-world luminaries stayed on this property,” says Bobbie, “including Elizabeth Taylor, when she was starring in The Little Foxes on Broadway.”

The inspiration for the new house: the great American barn. “We were driving around Sagaponack one day,” recalls Huniford, “and we passed a wonderful example. I said, ‘That should be the model for your new house.’” Bobbie and Frye, who have been together for 25 years and married for three, could not have agreed more. “We really admire the simplicity,” Bobbie says. “The straightforward rectangles are very modern in form and footprint.”

The couple interviewed several architects, but Huniford persuaded them to go with their mutual friend James McChesney. “We were afraid to ask him,” says Bobbie, “because we were friends and thought it might be awkward.” But Huniford knew McChesney’s work and thought he had the right aesthetic. “As it turned out,” Bobbie adds, “the four of us made a great team.”

“One of the best parts of the job was having enough time up front to get it right,” says Huniford. “Because Walter and David both work in the performing arts, they know how long the creative process takes. They understand that the more decisions you make early on, the smoother the result will be. I think that’s part of why the house seems so serene.”

Huniford worked with McChesney on the layout and detailing of the home, training his eye on the interior design from the first architectural drawings. “It was important for Walter and David that the exterior be maintenance-free and the master bedroom be on the first floor,” says Huniford, “and all of us agreed to keep it simple.”

The biggest space is the double-height living room, which opens onto a covered deck. The master suite is to the south of the living room, behind the fireplace, and the dining room and kitchen lie to the north. On the second floor, two guest rooms occupying opposite ends of the home are connected by a bridge that offers a vague echo of a hayloft, and Bobbie also maintains an office.

“The house’s aesthetic mixes clean and modern with found and historic,” says Huniford. “Not using moldings and trim is a modern gesture, but we used reclaimed timber on the floors and paned windows to evoke some sense of agrarian tradition.” The finish on the oak flooring, from Vermont, complements the walls, a custom color created by Huniford. “The paint has blue, green, and gray in it, and looks different in every room, depending on the time of day, the scale of the space, and what’s outside the windows. It took about 15 tries to get it right.”

“There’s an advantage in having the same palette for the floors and walls in all the rooms,” Bobbie points out. “We can move the furniture around whenever we want, because everything looks right in every space.”

Most of those furnishings are new. Their previous home, Bobbie says, was “cottage-y and cuter,” so its decor felt out of place here. Huniford assembled an array of modern, antique, and vintage pieces and added custom sofas, chairs, and tables from his own collection. But Bobbie and Frye didn’t say good-bye to all that. “I still have my grandmother’s table,” says Frye. “It’s in the upstairs hall, and I think of her every time I pass by it.”

Streamlined aesthetics notwithstanding, Huniford had some fun with the design—particularly in the overscale ceiling fixtures. The hulking trapezoidal light in the living room is made of galvanized metal, and one of the guest rooms features an inverted basket transformed into a chandelier. The dining room’s much frillier example, a ruffled tribute to Josef Hoffmann, nicely accentuates the set of Wiener Werkstätte dining chairs Huniford bought in Paris. “I love things that are captivating and curious,” Huniford says, “things that get your eye to wander.”

Now that the work is done, Bobbie and Frye are elated, and all personal relationships remain intact. “Building a house,” Frye says, “gives you shared history. They say that until you build a house together, you really don’t know anything about each other, and now we know quite a bit.”
“The thing I like most,” says Bobbie, “is that I am just as comfortable here when I’m alone as I am when the guest rooms are full and the pool is jumping with people. It’s relaxed and relaxing. It makes us enormously happy to be here.”

A version of this article appeared in the July 1, 2016 issue of HC&G (Hamptons Cottages & Gardens) with the headline: Home Theater.