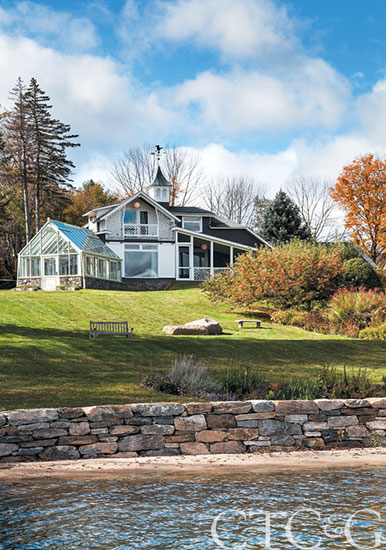 When Bob and Mary Ann Downes approached New York City–based architect Andrew Bartle with the idea to create a guesthouse on their Bantam Lake property, they didn’t come to the architects with a suggestion for what they wanted the new space to look like (unusual in this age of Pinterest and Google image searchability), rather only for what they wanted the new space to do: connect. The couple wanted to bring together family with extended family with friends back to family, to celebrate their vision of a richly inclusive network that needed more space than the couple’s main house could provide—and more privacy than such close quarters could offer.

Enter, stage left, a barn; now a two-bedroom, one-sleeping-loft guesthouse with sweeping views overlooking the lake and a striking amount of open space. “They wanted a place where guests would feel comfortable, and not like they had to perform,” Bartle says. “And they wanted to do it economically and in such a way that they could take advantage of the view of the lake.” Because the couple didn’t have a specific look in mind, Bartle and his design partner Ken Lake started from the social and moved toward the aesthetic, keeping in mind both the spoken and unspoken requirements. Bartle had noticed Mary Ann’s modern stylishness, and saw how that contrasted (though complemented) Bob’s comfort with traditional settings. “Bob could see a traditional house, and Mary Ann could see a modern,” Bartle says. “I think all of our projects have tried to walk that line—and this one does it in a very interesting way.” 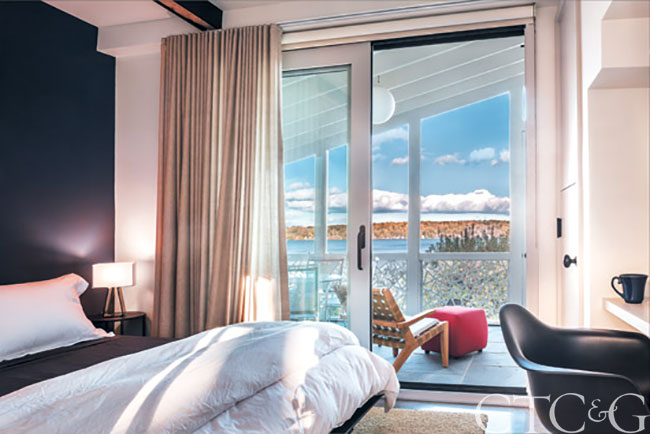 The first sign of that line is in what the architects call the Chinese Chippendale, a repeating screen pattern that appears both outside and inside, hanging low from the roof and perching tall on a stair. Next is the sleeping loft, tucked under the roof and illuminated by an almost-impossibly-thin clerestory, furnished with benches that become sleeping areas once you bring out the bedding stored underneath. Then there’s the central stair, its treads thick and red, a dash of bright modernism in the carefully laid-out main space—but it also works conceptually. “The stair was a critical moment,” Bartle says, explaining how amping it up so much helped to give the overall interior space a much larger, punchier feeling. “The building is unbelievably tiny.” And the stair, rather than filling up the space, manages to expand it. 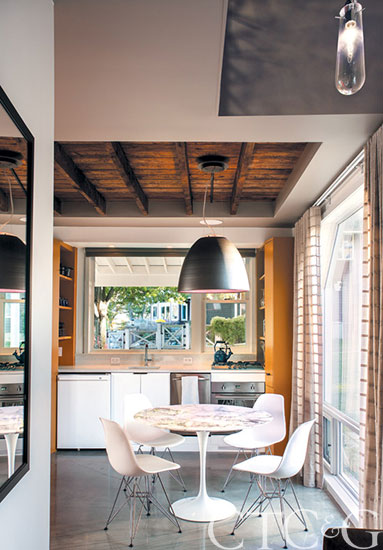 That kind of visual sensitivity and acuity appears throughout the structure. A sitting room frames a view of the lake, while, in that same room, a column, wrapped in rope, both holds the ceiling up structurally and holds the building together conceptually. Textural remnants of the original barn appear here and there in the form of the original ceiling, exposed in all its beam-filled glory; and in the adoption of original floor planks onto a textured wall surface. On the outside, gates and windows offer shapely shadows of their former lives—a cross between adaptive reuse and postmodern interpretation. “What was fun about the project is that they had more building than they needed, so we were able to subtract parts of the building,” Bartle says. “We were able to make these interstitial spaces work with the whole transitional zone between the inside and the outside.”

A significant amount of architectural education is devoted to training designers to be able to work with that fluid and ever-changing boundary, and this house works not only with one—inside and outside—but many others: sleep and wake; rest and relax; building and ground; decoration and structure; house and barn; friends and family.

A version of this article appeared in the June 2014 issue of Connecticut Cottages & Gardens with the headline: Home Away From Home.

This article appears in the June 2014 issue of CTC&G (Connecticut Cottages & Gardens).