A Converted Barn in Wilton Becomes a Rustic-Modern Home 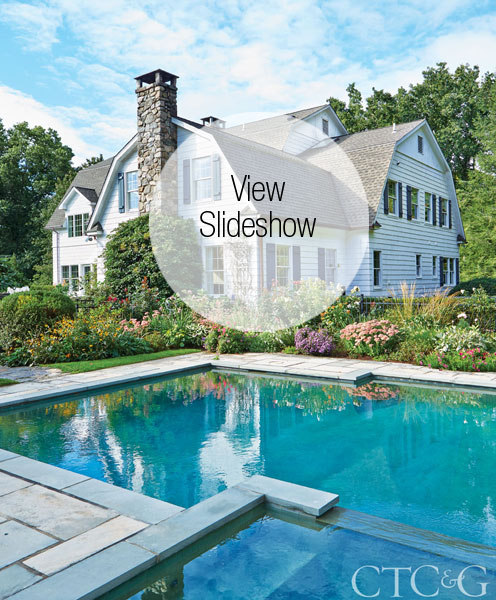 Sometimes it takes a swift kick in the pants to get it done. For a Wilton couple, a rain-filled summer without central air provided the necessary wallop to get them started on an overdue renovation of their 1920s gentleman’s barn that had been little updated since it was originally converted in the fifties. “We knew we needed to at least do the master bedroom,” says the homeowner, “but life just got in the way.”

That aforementioned rainy summer, though, resulted in a pesky mold problem that prompted the couple to get off the dime. They brought in architect Rob Sanders, who the homeowner knew through the Wilton Garden Club, to redo the master bedroom and bathroom. “When he came over, he politely listened to all our ideas,” recalls the homeowner. “Then he came back with the most fabulous plan and ignored what we had said. I knew I needed to shut up and listen to an expert. It was a real eye-opener.”

“The master was dated to the full extent of the word,” says Sanders. It wasn’t just the master though, the entire upstairs floor plan—with lots of bedrooms and long corridors and windows so low you couldn’t see out of them while standing—needed an overhaul. The master bedroom morphed into a bigger project, and the second floor was modernized for a more functionable floor plan. Once the upstairs was complete, everything else paled in comparison. The homeowner decided to attack the kitchen, but “once again, Rob came up with a fantastic plan that basically gutted and flipped the floor plan downstairs,” she says. He reorganized the whole first floor, reversing the kitchen and the dining room, the kitchen now acting as a center hub. “It was an entire facelift by the time we were done,” says Sanders. “We amped up the place, but also gave it more function and let more light in.” The client, a former investment banker turned landscape designer, says, “The gardens are my passion and what I love about the new layout is that when I stand in my kitchen, I have a 360-degree view of them.”

For the interiors, Sanders brought designer and artist Ginny Awn on board during the master bedroom phase. “The homeowner was very organized and showed me all these pictures,” recalls Awn. “I said, ‘I guess you like French?’ and she said, ‘I do?’ She had ideas but needed a clear direction. It’s funny because over the five years we worked together, her style got more and more contemporary.” With its Louix XVI touches, the master is by far the most traditional space in the house.

“Over time, people change, tastes change,” explains the homeowner. “I had an ‘aha! moment’ after we did the master. I fell in love with the very contemporary space, and it made me think about design in a different way—you don’t have to use your grandma’s furniture.”

The last phase of the project, the living room, is where this new point of view is fully appreciated. Awn had a blank canvas to start with and covered the living room’s hearth with an ivory, gray and gold-tinged quartzite. She kept to a neutral palette weaving in interesting pieces and varied textures: gold and silver snakeskin–covered benches with a brass base; wing chairs with gold-washed legs covered in a creamy leather; a custom curved sofa upholstered in a gray chenille.

“I love this room. It’s soothing, relaxing and elegant,” says the homeowner. “If I were to start over, I’d do all the rooms like this. It is the culmination of my design sense.” Adds Sanders, “We floated around the phrase ‘rustic modern a lot. There’s a nice tension between contemporary and traditional. It almost has bling quality to it that is a result of the owner’s eye and Ginny’s ability to fulfill it.”

A version of this article appeared in the September 2016 issue of CTC&G (Connecticut Cottages & Gardens) with the headline: Change Agents.

The Artful Park Slope Duplex of a Photography Industry Exec Lists for $3.6M 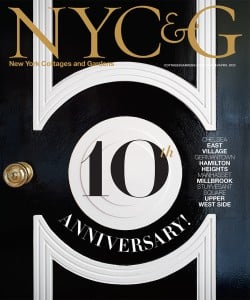