Once this couple got started with a renovation, the mantra quickly became “why not” 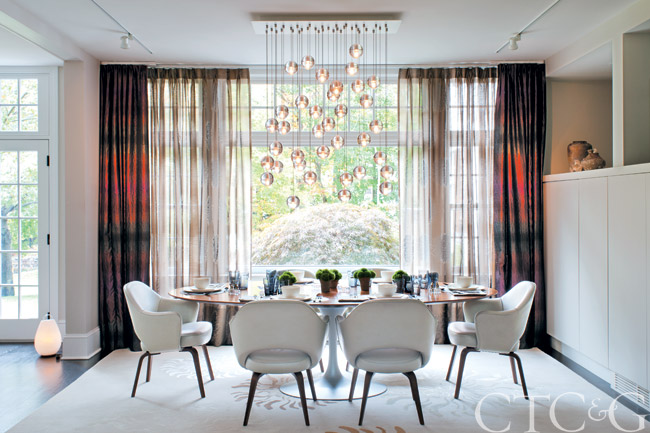 Longtime Darien residents John and Lulu McPhee were perfectly content with the 1937 center hall Colonial they bought in 2002. The only thing it needed was a new kitchen. But small house projects have a way of taking on a life of their own, and soon the McPhees were sitting down with an architect and drawing up plans for an ambitious renovation that not only doubled the home’s square footage, but also gave it a cleaner, more contemporary look. “The house was plenty big, but there were certain things it lacked,” says Lulu. “Once we got started, the question often wasn’t ‘why do something?’ but ‘why not?’”

The goal was to retain the classic New England feel on the outside, but open up the interiors to create rooms that were warm, inviting and a little more relaxed. “I love traditional Colonial architecture,” says Lulu. “But it can be closed off and formal. We wanted to make the circulation flow.” 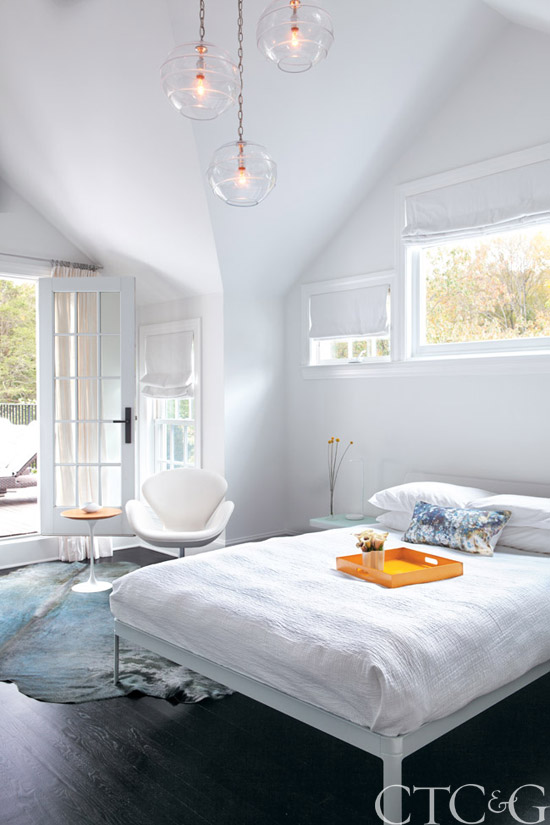 John and Lulu have an affinity for modern design: John is the president of Design Within Reach (formerly the COO of Edelman Leather), and Lulu grew up in Oregon, the daughter of an architect. To achieve their vision, they enlisted the help of Westport-based architect Tasos Kokoris. “It was a nice house with beautiful lines,” says Kokoris. “In deference to the neighborhood, we didn’t want to do anything crazy from the street side.”

Inside, however, was a different story. Most of the space was reconfigured, though the living room and master bedroom—part of an expansion by the previous owners—were left intact. The open stairway to the basement is now part of the design instead of hidden from view. The dining room became a home office with a fish tank wall; the kitchen is now a mudroom with deluxe digs for the family dog; upstairs are three bedrooms for each of the children. In the spacious kitchen, formerly the family room, Kokoris opened up the back wall and added a large rectangular space, which is divided into separate sitting and dining areas. French doors lead to an expansive screened-in porch. “We were able to add some bells and whistles,” he says, such as an elevator, a second-floor laundry room, a media room and wine cellar, plus a state-of-the art geothermal, solar heating and cooling system. 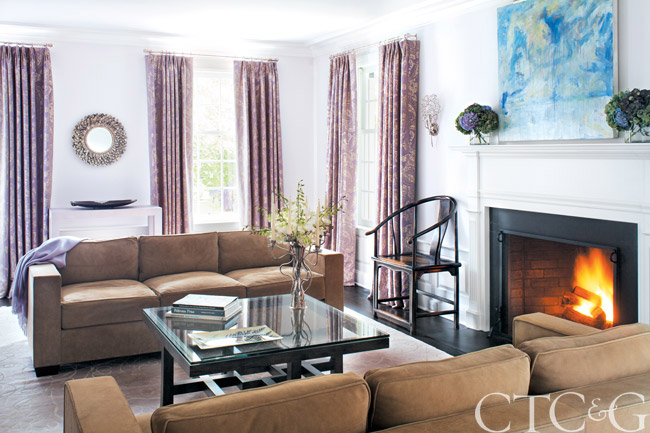 For the interiors, the McPhees wanted to incorporate a mix of contemporary and Asian furnishings. Lulu turned to Darien designer Melinda Tweeddale, whom she had met years earlier. “I could tell she was someone who thinks outside the box,” says Lulu. To maintain a cohesive look between the old part of the house and the new, Tweeddale used a neutral palette of gray and taupe, with purple and green accents. She updated the living room by adding a hint of lavender to the white walls. Lavender drapes with a shimmery gold print, and a custom lavender and metallic area rug add just the right transitional note. In the sitting area, a classic Florence Knoll sofa is covered in a celadon linen; the chairs are done in a brown linen with pops of raspberry; and the dining chairs are a sea-foam green leather. In keeping with the clutter-free aesthetic, kitchen appliances are hidden from view, including the refrigerator, which is housed in an Asian armoire.

“I’m very aware that rooms can make people feel a certain way,” says Lulu. “We thought about every inch of the house—inside out, outside in.” Case in point: the trio of crystal lighting fixtures in the foyer that lead to a view of the outdoors. “The sparkle draws your eyes up, and you immediately feel present and centered,” she says. Similarly, in the wine cellar, the floor, ceilings and walls are done in red leather tiles. “There’s wine and a new shoe smell,” says Lulu. “Why would you ever want to leave?”

A version of this article appeared in the March 2014 issue of Connecticut Cottages & Gardens with the headline: Design Without Reservations.