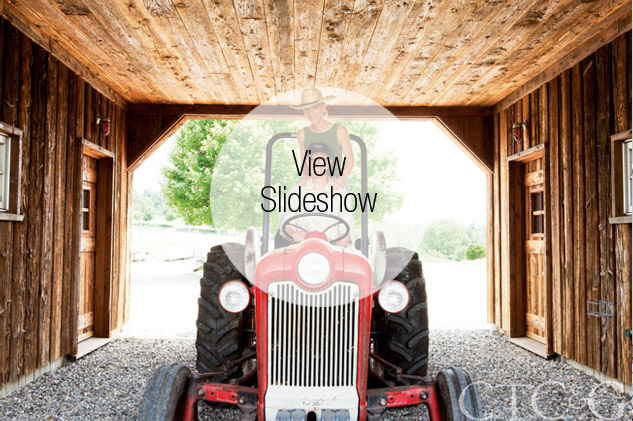 When Henry Smedley and Kathy Chow purchased 40 bucolic acres near Sharon in 2003, rather than rush to build their weekend retreat, the Manhattan-based couple opted to take time to understand their surroundings. “I learned in architecture school that you should camp on a property first to learn things like where the sun goes up and down and where the animals loft,” says Smedley, who ended up pursuing a career designing retail interiors and is now the Senior Vice President of Store Planning for Calvin Klein. And camp they did, but not the North Face tent and Coleman stove variety. Instead, they established a temporary home befitting a CK executive and a fashion designer who also works in brand strategy complete with two pristine white expedition tents with lush linens on the bed cots, and what Chow claims was “the most beautiful Porta-Potty you ever saw” perched on a hillside. “We treated our friends to wine served in glasses and Ghirardelli chocolates on their pillows,” Smedley says.

After four summers of camp life, the duo developed a simpatico with their surroundings few people get to experience. “We became aware of how comfortable we were living in harmony with nature and knew we wanted a house that would sit gently on the land,” he says. Paramount to that vision was an environmentally sensitive well-insulated building that included geothermal heating and cooling, windows on the south and west sides for optimal heat gain, and the use of recycled materials. And while it wasn’t their original intention to build a barn, the iconic form emerged as the logical, straightforward solution.

Despite the inherent simplicity of the structure, they were unsure how to proceed, so they hired JLF & Associates, a Montana-based architectural company known for projects like the exclusive Yellowstone Club, to assist them with planning their 2,900-square-foot home. “We loved their use of old materials but wanted a more East Coast interpretation,” says Chow about the Western-style-meets-Connecticut-barn aesthetic they sought. “Without question, this was the smallest house they ever built.”

In their quest for recycled materials, during the planning phase the duo procured reclaimed mushroom wood from a Mennonite wood broker in Lancaster, PA. “He told us about an Amish man who was taking down a 90-year-old barn and asked if we wanted the wood,” says Smedley about the mother lode of cypress and hemlock that eventually became the living room ceiling and from which he crafted their bed. They also benefitted from a windfall of sorts when a tree planted in 1760 located on Smedley’s family’s farm in Media, PA, met its demise. “We milled it into some flooring and a dining room table,” he says about the white oak.

According to Chow, the unique mixture of artifacts at Hammond Castle in Massachusetts inspired the variety of design genres in their slightly quirky domicile. In the living room, Stickley pieces get cozy with a rustic Daniel Mack chair; Art Deco furnishings in the guest room are backed by floral wallpaper. “It morphed into an English cottage,” she says, and there are touches of taxidermy throughout. “We designed the fireplace for ‘Bruce the moose,’” adds Smedley about the prominent trophy head. “We call it God’s artwork.”

Allotting three years to designing and building gave the couple the luxury of attending to every detail. “Every door knob was an opportunity,” says Chow. A found porthole was sandblasted and fitted for the peaked sheet-metal door in the guest bathroom; the newel posts on the landing were fashioned from old telephone-pole insulators and then wired with LEDs; and just about every cornice, knothole and mortise is filled with fishing lures, tiny figurines and other treasures.

With similar thought, the couple dubbed their getaway “Looking Glass Farm,” because “when you go from the darkness of the forest into the brightness of the pastures, it’s like going through the looking glass,” says Smedley about the Alice in Wonderland reference. The experience is not unlike how the couple feels when they leave their weekend digs for the city. “It’s like tearing ourselves away from heaven.”

A version of this article appeared in the October 2014 issue of Connecticut Cottages & Gardens with the headline: Happy Campers.