A Creative Couple Decorates Their Weston Home with Handcrafted Treasures

Armed with the knowledge that the traditional gift theme for the first wedding anniversary is paper, Charlie Cole marked the occasion by presenting his wife, Kimberly, with a grandfather clock he lovingly crafted out of cardboard. A dead ringer for the real thing, the facsimile strikes a stately pose in the entry of their Weston home where it is forever set at 2:35 commemorating the wee hour of the morning when he woke her up and proposed.

“I can make anything out of cardboard,” admits the inventive and decidedly romantic homeowner, who directs television commercials by day and fashions all manner of paper items in his off hours. Inspired by a photo he saw in a magazine, the oversized clock that hangs in the living room, for example, resembles an enviable antique Paris flea-market find. “It’s about five feet across and weighs two pounds,” he says. And on the opposite wall, his paper version of the surface of the moon is on display.

But prior to filling their Connecticut digs with cardboard cutouts and more functional items, the couple resided in a house in Laguna, CA, and convincing Kimberly to leave the beach locale required nailing just the right residence. “We’d been looking for a year when I saw this house online,” explains Charlie, who had previously lived in Weston. “It had lots of charm and felt like the houses I grew up in.”

It also has a pond, which, while no substitute for ocean vistas, provided the necessary catalyst. “The water really helped,” says Kimberly about the aquatic part of the two-acre property. “Instead of whale watching, I’m on the lookout for egrets, frogs and turtles.” No slouch on the creative front herself—she’s a makeup artist with her own cosmetics line—Kimberly joined forces with her can-do-just-about-anything husband to tackle the update of their East Coast home. 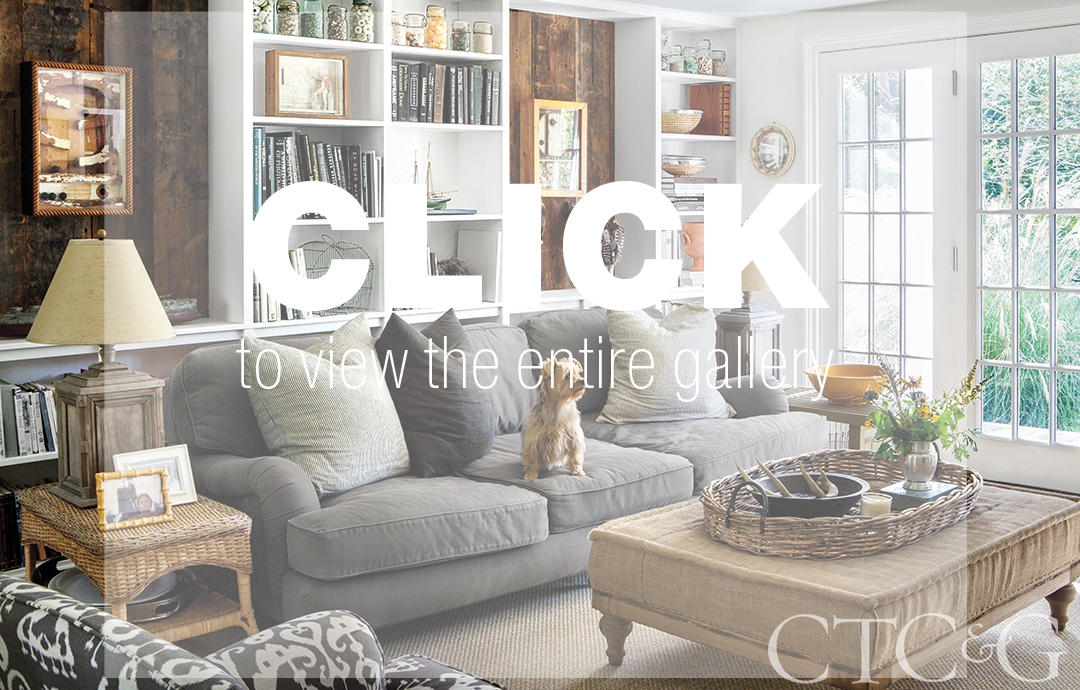 Like many makeovers, this one began with paint. “The first thing we did was put a coat of white paint over the red, green and blue walls,” says Kimberly. “We wanted a big blank canvas to work on.” Next, Charlie added all new millwork, followed by a redo of the back room. Then, compliments of Hurricane Sandy, a 70-foot tree crashed through the roof of that very room—the same space that their teenaged son and his two friends had vacated just moments before.

Grateful to have averted real tragedy, the couple adopted a lemons-to-lemonade approach. “It was actually quite serendipitous where the tree ended up falling,” recalls Charlie. “That was the one section of the house that if we had had the enthusiasm and the money, we would have definitely renovated.”

Deciding to go all in, and with the help of architect Joseph Matto, the couple added a larger family room in the demolished space, two porches, and a new guest bedroom on the second floor. “We had the opportunity to raise the ceilings but chose to stay in keeping with the existing house,” says Charlie. “We wanted it to feel like nothing had been added on.”

Slowly the duo began remaking their home in their own image. “We are both collectors, and we like using things from nature,” says Kimberly, referencing the bird’s nests, driftwood, heart-shaped rocks, and shells from their travels displayed amidst a subdued blue, gray and white palette.

The seasons also played a key role in their overall decorating scheme. “In spring and summer, we head for the living room,” says Charlie about the space outfitted with a sofa and chairs wearing cool white linen. Here, the shelving he crafted is back-painted with a soothing shade of blue, and the water reference sets off their collection of Frances Palmer pottery to perfection. Come winter, a cushy charcoal sofa and a burlap-covered ottoman in the new family room beckon. Salvaged wood sheathing interspersed in the open shelving complements the cozy space.

“Over time, we add things in and take things out,” notes Charlie about their personalized approach to decor. “If we had a designer, we wouldn’t have known what to tell him or her to do.”

A version of this article appeared in the November 2018 issue of CTC&G (Connecticut Cottages & Gardens) with the headline: Cole Country.