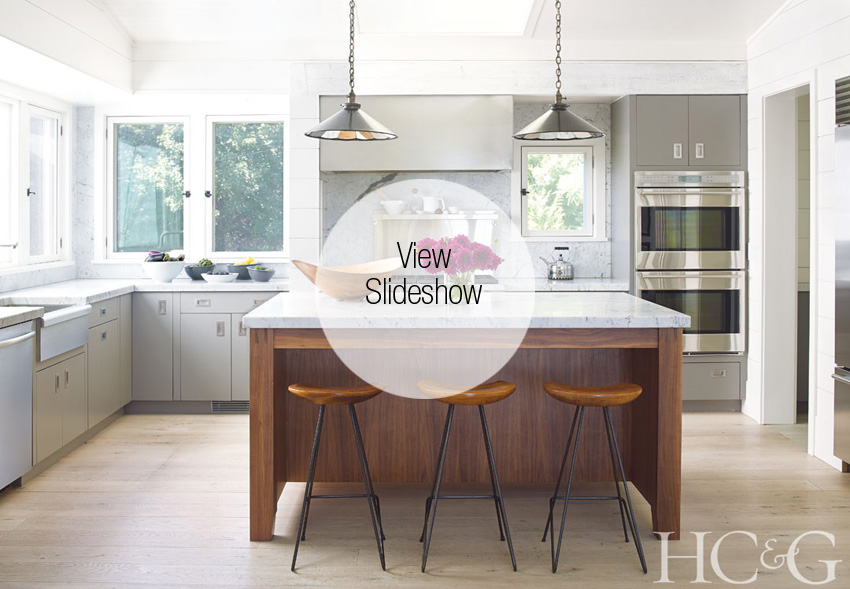 Even people who know the Hamptons by heart, even longtime residents of Sag Harbor, have occasionally never heard of Redwood. How dreamy to imagine an undiscovered neighborhood among the East End’s well-trod byways, an extra bend in the road that would throw a Range Rover’s GPS for a loop.

Part of Sag Harbor proper, Redwood is a triangular-shaped extension—an island, really—accessible only via a small bridge (or by boat) on the western stretch of town. It still bears the humble characteristics of times gone by, including around 100 houses that were built there in the 1950s and ’60s, many of them still unchanged and the majority either on the water or overlooking it.

Redwood was precisely the kind of neighborhood that appealed to Bill Beeton and Julia Hubbard. The husband and wife—an architect and garden designer, respectively—had been living in Venice, California, when they felt the desire to move east after 9/11. He is a native of Boston and she is a Washingtonian, and they had just had their first child. They decided to investigate putting down roots on either the North or South Fork and took a rental on Beach Lane in Wainscott. “We went from Venice Beach to the beach here,” says Hubbard. “It’s where we needed to be.”

At first, the couple decided to build in Sagaponack, but had second thoughts about the deeply wooded lot they had settled on—not ideal for the garden designer in Hubbard. With their two children already attending Sag Harbor’s well-regarded Pierson Middle-High School, the village itself suddenly seemed ideal. One day the couple’s broker called Hubbard “and told me to go to an open house in the pouring rain,” Hubbard recalls. “The lot was overgrown with dead trees, but I phoned back and told her that this was the house for us. So many people had passed on it, but we saw what it could be.”

Situated on three-quarters of an acre on a hill—the second-highest point in Sag Harbor, surprisingly, given its proximity to water—the house offered views of Sag Harbor Cove and Noyack Bay from three sides of the roof, and Hubbard knew that she and Beeton could maximize the vista. “I could even see the neighbor’s pig and chickens,” she says. “I thought, We could just walk across the street and get fresh eggs!”

Built in 1952, the house was indeed in need of a refresh. Beeton got to work, transforming the three-bedroom, one-bath ranch into a five-bedroom, five-and-a-half-bath, two-story home. “We kept part of the foundation, but basically took it all down except for three studs in the kitchen,” says the architect, who added an ample deck off the master bedroom, which has views of the water and of the swimming pool, densely planted by Hubbard with perennial flowers and grasses.

Today the home is nothing of its dowdy former self, and thrums with the energy of kids and music and guests. Son Harlan, 15, is the bass player and lead singer in the band Red Tide, which often performs at Stephen Talkhouse in Amagansett, and horses are 13-year-old daughter Lucy’s passion (she rides in the Hampton Classic each year). The interior is easy, breezy, and spare, reserved for things that mean the most to the couple, like books, walls of which frame the library, and scads of family portraits—of Beeton as a boy, and of relatives and friends painted by Hubbard’s grandfather and great uncle.

The new “big little house” is “amazingly comfy,” Hubbard enthuses. “We’ve had anywhere from six to 100 people for dinner.” There’s plenty of room to ramble both indoors and out, since Hubbard has created an enchanting series of outdoor rooms—like a Provençal-style courtyard off the kitchen and a sea of boxwoods and hydrangeas surrounding the ample front porch. And unlike the almost-was property in Sagaponack, their new digs are bathed in full sun. All the better for enjoying the pool, says Beeton: “We tell our friends to stop by whenever they want, have a swim, and pour themselves a cocktail—if we haven’t done it for them already.”

A version of this article appeared in the July 15, 2016 issue of HC&G (Hamptons Cottages & Gardens) with the headline: Starting Anew.