A Dated Darien Home Gets a Contemporary Makeover 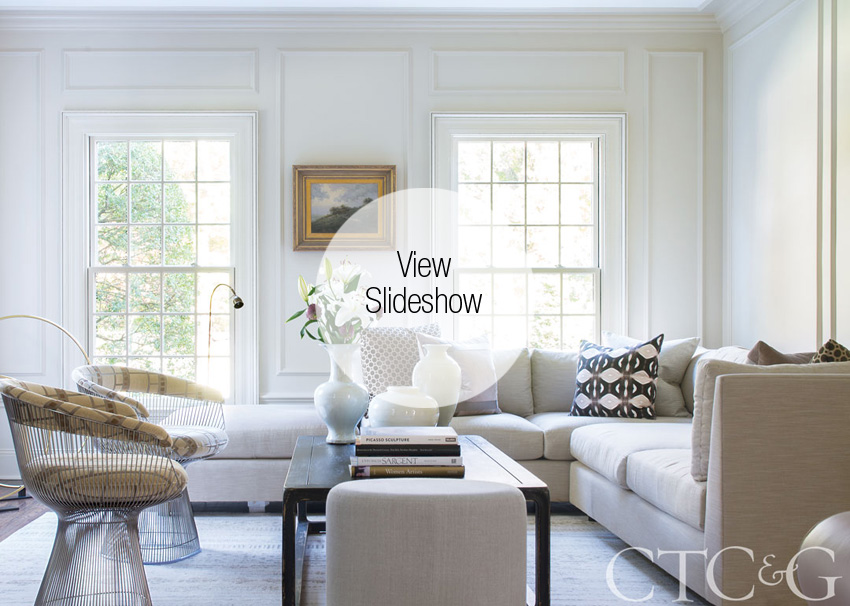 So dedicated were Chelsea and Jud Staniar to the renovation of their Darien house that their twelve-year-old son showered in an upstairs bathroom as a snowstorm blew in through the tarp covering a nonexistent window. “My son said to me that morning, ‘Mom, I think I’m the only kid at school who took an outdoor shower in the snow,’” recalls Chelsea. “We were hoping to live in the house through the renovation, since we conceived of it as a gentle process. We were so impressed with the work architect Matt Dougherty and interior designer Robin Pegue-Shinnick were doing that we just kept going. Eventually, we moved out for about four months.”

The Staniars had already been living in Darien for nine years when they discovered this home for sale on their favorite street. Although the residence was, as Dougherty characterizes it, “a dated, typical 1980s spec house,” the couple recognized its potential even from the curb. Pegue-Shinnick says: “They said to me, ‘We know that this is our house—all you need to do now is to make it beautiful.’”

What the homeowners and Dougherty had first called “the ham-and-cheese house,” for its original garish yellow trim and way-too-bright red brickwork, has been transformed into a classic home with a gracious entry porch, gabled roofs and custom-designed multipaned windows. “There is not a space we didn’t touch or freshen up in some way,” says the architect.

Inside, Dougherty added decorative paneling to the walls to create immediate visual interest, particularly along the main stairway. He replaced all doors and hardware, rebuilt mantels, and designed a “floating” stone fireplace in the living room. “Everything was made more contemporary in feel to match the taste of the homeowners,” notes Dougherty.

Chelsea and Pegue-Shinnick stuck to a neutral palette throughout, mostly whites, tans and grays. “I knew Chelsea would be collecting lots of things in her lifetime,” notes the designer. “Color would be introduced by what she collected.” Chelsea adds: “I have two darling boys and they bring all of the life to the house. But when we walk into the house, it immediately feels restful and calming.”

When the couple decided to “get more elbow room,” as Jud puts it, they also wanted to start fresh with the furnishings. “Because Matt was so confident about what needed to be done architecture wise, we felt confident about how to furnish the rooms,” says Jud. Apart from two existing wing chairs, the couple worked with Pegue-Shinnick to repopulate every room. “We chose classic pieces from Knoll,” says Chelsea, “and lots of textured Phillip Jeffries wall coverings.”

Although the interior and exterior work is long completed, Chelsea continues to reminisce about the process that some people might find daunting, even defeating. “Every morning, I’d wake up and drive to Dunkin’ Donuts to get coffee and treats,” she says, “and the whole team would be together to discuss what was to be done that day. It was such a happy, positive experience.”

Adds Jud, “Matt and Robin and the builders and carpenters would really hear what we had to say, then expand on it, improve it, alter the direction slightly to make it all work.” Designer Pegue-Shinnick concurs: “The best design projects are always collaborative ones.”

A version of this article appeared in the September 2016 issue of CTC&G (Connecticut Cottages & Gardens) with the headline: A Winning Combination.