A Decade of Design with Christopher Peacock 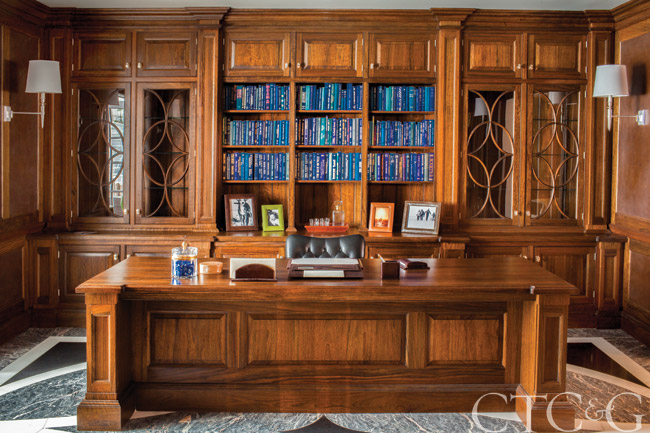 Christopher Peacock began his illustrious career in England in 1982. Whilst following his passion as a professional drummer, he took on a part time job delivering cabinetry for a family friend. He soon realized his talent for art and interior visualization was well suited for the job and his drumming career soon took a back seat to the slightly more lucrative cabinetry business.

Moving to London, where he worked at Terence Conran’s Heal’s furniture store, he gained experience working with European high-end kitchen brands. That experience prompted an invite to move to the US to design showrooms for SieMatic Cabinetry in the late 1980’s. Within a year he moved to Manhattan and took a role as senior designer for Smallbone English Cabinetry. After a successful four year stretch, he decided to form his own U.S.-based design and manufacturing entity.

“Christopher Peacock” was formed in 1992 in Greenwich, CT, where a single display of his cabinetry was installed in a local interior design shop. Since then his company has grown and his reputation for providing the highest quality cabinetry design and installation service has placed him in the “royalty” of rock star interior designers. The launch of the Scullery collection in early 2004 proved to not only be a new design trend but caused a dynamic shift in kitchen design. That one versatile style provided a cabinetry solution that worked for a myriad of homes and was equally desirable in a Florida vacation home, a pre-war building in Manhattan, or a back country estate in Greenwich. That new “ White Kitchen” look, coupled with exceptional “ jewelry like” hardware, was his personal reaction to seeing one too many highly decorated kitchens. It further established Christopher Peacock as the brand to own. Since then new variations of cabinetry designs have solidified the recognizable Christopher Peacock style and his proprietary hardware has become highly sought after.

Christopher’s work graces homes and estates across the globe, including many celebrity clients and captains of industry. Most notably, Christopher completed thirteen rooms of cabinetry for President and Secretary of State Clinton, and has appeared in numerous national and international design publications, not to mention several television appearances, including Oprah, CNN and HGTV.

His company owned showrooms are located throughout major cities in the U.S., and most recently he added a 5,000 sq ft flagship showroom at the D&D building in Manhattan. A new international location in Cannes in the Cote D’Azur launched last summer and Peacock will open

A version of this article appeared in the September 2014 issue of Connecticut & Gardens with the headline: A Decade of Design with Christopher Peacock.