A Decade of Design with Duralee 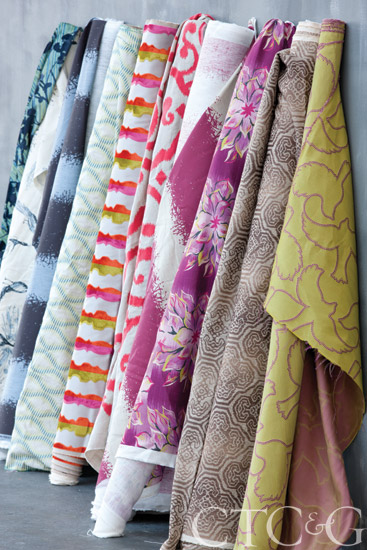 While the past decade is merely a small portion of Duralee’s 60+ year history of serving the design community, they have been filled with a series of important advancements and expansion of the fabric and furniture powerhouse. Ten years ago, Duralee was a different brand. The creation of an in-house marketing department in 2004 gave Duralee a fresh, new brand aesthetic. With the redesign of everything from logos to sample books, Duralee took on the colorful, exuberant persona that they are known for today.

The last decade has also seen the company branch into additional product categories in order to offer the design community a one-stop shopping experience. In 2007, Duralee became the first fabric house in the industry to produce their own furniture with the purchase of their current manufacturing facility in Morganton, North Carolina. Proud of the craftsmanship of the American workforce, Duralee is pleased to produce jobs and create finely-crafted, handmade furniture frames at home in the U.S.

With the introduction of Philip Gorrivan for Highland Court in 2008, Duralee entered the world of licensed fabric collections. By teaming with dynamic designers such as Philip, Thomas Paul, Clodagh, Eileen Kathryn Boyd, Laura Kirar, John Robshaw and Tilton Fenwick, Duralee has offered a series of exclusive collections from each designer’s unique perspective. In addition to expanding their own fabric offerings, Duralee has become the U.S. distribution channel for U.K.-based fabric and wallcoverings brand Clarke & Clarke. The Clarke & Clarke product line has taken the country by storm with their saturated European color palettes and innovative designs.

With the internet becoming an integral shopping tool, Duralee also expanded their online presence. Knowing that the designer’s work often runs past the hours of 9 to 5, the company has utilized a steady stream of emerging technologies in order to offer designers the opportunity to shop 24 hours a day, 7 days a week, with the introduction of the new duralee.com.

The purchase of B. Berger in the summer of 2012 offered Duralee the opportunity to branch into the drapery hardware sector as well. The company’s sales force is pleased to now carry product from The Finial Co. and Paris Texas Hardware, along with Duralee Hardware, their own proprietary line of finials, poles, traverses and accessories. In addition to the B. Berger product line, Duralee acquired the archives of iconic fabric brand Bailey & Griffin. Recognizing the importance of the Bailey & Griffin designs, the company decided to revive the dormant brand and inject it with new, updated colorways and scales in order to bring the high-end, hand-screened prints to today’s marketplace.

Bookending the new Duralee look, their showrooms across the nation have seen massive renovations and re-merchandising. Starting with moves and expansions in cities such as Boston, Washington D.C., Dallas, Houston, San Francisco, Troy, Seattle and Chicago, the company has just completed their brand new flagship showroom space in New York’s D&D Building.

The interior design industry is ever-evolving, and as evidence, Duralee has been consistently changing to meet needs and exceed expectations of the design community. They’re looking forward with the intention to take on the next ten years with the same fervor as the past decade.

A version of this article appeared in the September 2014 issue of Connecticut & Gardens with the headline: A Decade of Design with Duralee