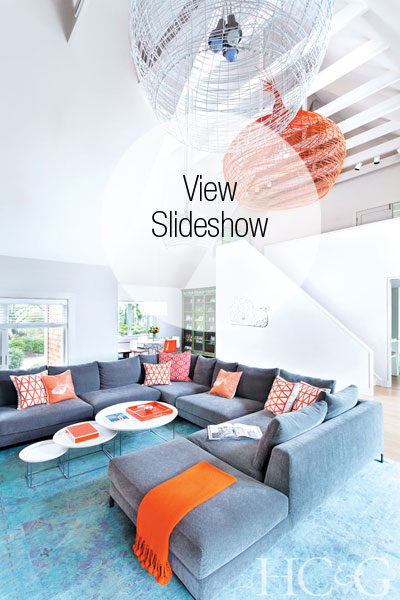 Despite having its own private beach and wraparound views of Peconic Bay, the five-bedroom, 8,000-square-foot mid-20th-century home at the edge of a peninsula had been languishing on the market forever. The structure’s slapdash exterior (the result of add-ons applied haphazardly over time) and gloomy interior spaces—heavy mahogany woodwork and crown molding, red wallpaper, brass chandeliers, and view-obscuring mullioned windows—had discouraged buyers for years. Then the recession gave the listing a little nudge forward.

A Manhattan banker had seen potential in the woebegone Hampton Bays property and was following the home closely online, waiting for the price to come down before showing it to his Australia-born wife, whom he knew would want to own it immediately. So in 2008, when the price dipped, he was ready to share his secret obsession, and, as predicted, his wife swooned. In short order, the home—with all its promise and all its challenging quirks—was theirs.

The couple quickly set about opening up and brightening the house, putting a special emphasis on making it welcoming for their two young children. To help them, they enlisted interior designer Steffani Aarons and architect Steven Wakenshaw of DHD Architecture and Design, who faced the extra hurdle of local ordinances that prevented them from truly streamlining the home—not to mention a Memorial Day deadline that gave them only five months to complete the work.

“We were extremely limited by what we could do,” Wakenshaw says of the area’s restrictions on beachfront expansion. “We couldn’t change the shape, the arrangement, or just about anything regarding the house’s footprint. We could do only structural repairs.”

“You’d never get permission to build that house today, given where it’s situated now, so close to the water,” says architect David Howell, who is Aarons’s husband and DHD’s founder. Erosion has brought the shoreline in closer than it was when the house was built, making any improvements that much more prohibitive to complete. Instead of advising the owners to apply for permits that might take years to obtain, Howell asked Wakenshaw to oversee an extensive upgrade, including a new roof, cedar siding in place of the existing scallop- and diamond-shaped shingles, a resurfaced patio, and new picture windows.

The interior was similarly revitalized, with a modern kitchen, five-inch-wide white oak floors tinted a Hamptons gray, and a palette of mostly whites and grays that create an atmosphere of calm while bouncing light in. “The clients were dreaming of something fresh, fun, modern, and family-friendly,” says Aarons. “They’re very informal.” Inspired by the water, the couple wanted to incorporate plenty of aquatic references, but nothing obviously beachy. They showed Aarons two silk pillows from Thailand—one turquoise, the other orange—which the designer used to create a color scheme based on the sea and sunsets.

“One of the first fabrics I found was the turquoise geometric pattern for the living room drapes,” says Aarons, who also employed water imagery in the ripple-effect Ann Sacks tiles on the kitchen backsplash and the graphic Sicis wall mosaic in the master bath. Orange makes an appearance via furnishings, accessories, and light fixtures, such as hand-woven globular pendants, throw pillows, and kitchen bar stools. “It’s a bright, crisp Hermès orange that’s great for the beach,” adds Aarons, who made an exception to the prevailing palette in the oddly shaped children’s guest room. To give its low, vaulted ceilings extra impact, she painted the walls in broad, bold red stripes, which draw the eye up and make a squat room soar skyward. The master bedroom, done in neutrals and pearly grays, is an understated, peaceful oasis.

With cozy sophistication as her ultimate goal, Aarons conferred a measure of intimacy in the lengthy living room as well. She carved out three gathering places, adding luxurious design-bible pieces to each, like a curvy chenille Vladimir Kagan sofa and Jens Risom armchairs. The look: equal parts polished and playful. In other words, perfect for a weekend house on the water in Hampton Bays.

A version of this article appeared in the June 2014 issue of Hamptons Cottages & Gardens with the headline: Perfect Perch.