Designer Lacey Booth trades in Upper East Side formality for the wilds of downtown. 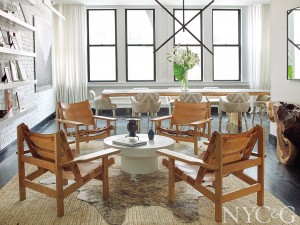 During Lacey Booth’s short time on the New York decorating scene, she has amassed a portfolio of traditional and tailored work. But when the designer relocated from an uptown apartment rental to a duplex co-op in the Seaport, she was inspired to enter uncharted territory. “The move gave me an opportunity to take a risk and do something I’ve never done before,” explains Booth. “I didn’t want this place to be predictable.”

Booth set out to create an airy, loft-like layout that fully embraces the more relaxed nature of her new address. To execute her vision, a year-long renovation of the circa-1906 dwelling ensued. Booth knocked down walls and raised the ceiling on the 1,500-square-foot top floor, opening it up into one expansive room flanked by wall-to-wall windows. Now flooded with light, the space is divided into four zones for lounging, cooking, reading, and entertaining, with previously hidden elements in full view: brick walls, mechanical pipes, mismatched beams, and original vaulted ceilings.

Booth, who graduated from Harvard University in 2008 and opened her firm in 2014, also gutted the lower level, another 1,500 square feet, down to the studs. This floor mainly houses private spaces, like guest quarters, her son Bernard’s room, and the master bedroom. To the latter, she added a gas fireplace and a towering canopy bed covered in a charcoal windowpane fabric from Ralph Lauren Home. “There’s not much else in my room, so I needed the bed to make a statement,” she says, although her nearby walk-in closet, featuring expansive sliding glass doors, is just as dazzling. 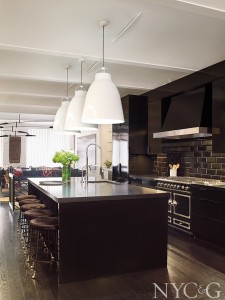 The designer arrived at her new digs empty-handed and excited to start fresh. “I wanted everything to be custom and tailored to the space, rather than have to force pieces to fit,” she says, so furnishings are boldly scaled to anchor each voluminous room. An oversize RH sectional and a David Weeks light fixture preside over the living area, while a 13-foot-long live-edge table and a Ralph Pucci International Scissor chandelier are dramatic additions to the dining area. The kitchen features a trio of extra-large bell-shaped pendants and a Caesarstone Jet Black slab island that seats five, so large it had to be hoisted through a window. A carefully devised palette of black and white unifies both floors. 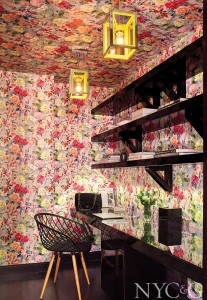 Departures from this largely monochromatic scheme include the guest bedroom’s walls, polka-dotted with colorful adhesive decals in shades that mimic a rainbow-hued Missoni Home throw and a yellow B&B Italia chair. Similarly, Bernard’s room is enveloped in a Pierre Frey wallpaper that depicts China’s Yunnan mountains in gradated shades of blue. Booth approached her office with similar zeal, sheathing the windowless space, including the ceiling, in a bold pink floral wall covering. “I looked at these rooms as chances to have fun and add elements of surprise,” she says. “I was definitely pushed outside my comfort zone and learned a lot, and that’s what keeps my job interesting.”

A print version of this article appeared with the headline: Dynamic Duplex.