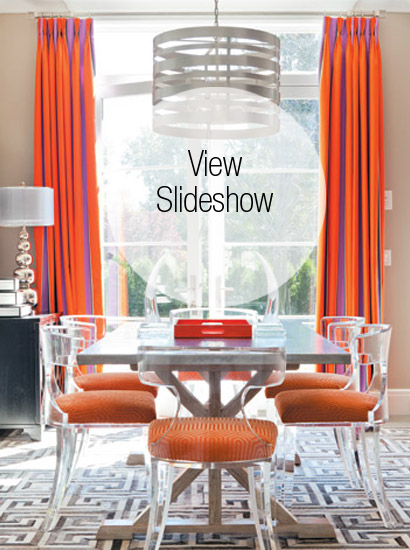 Say the words “Connecticut farmhouse” and a certain aesthetic comes to mind: classic, traditional, maybe even a bit rustic. For designer Gilles Clement, whose contemporary take on a Fairfield County farmhouse was featured on last spring’s Near & Far Aid house tour, the opposite is true. “Whether it is in Connecticut or Monaco, a home should reflect the personality and style of the homeowners,” he says.

The homeowners in this case are a couple with two young children. Though the wife was born and raised in Fairfield County, the husband grew up in Paris—coincidentally, in the same neighborhood as Clement. The couple envisioned a bright, modern space that accommodated their kids, without sacrificing grown-up tastes. “I had been in real estate for a long time,” adds the wife. “I’d seen a lot of houses. From a functional standpoint, we knew what we wanted.”

They bought a teardown and started from scratch, bringing Clement into the planning process early on. Because he had worked with them before, he knew they were up for taking some risks. “My style is very transitional and colorful,” says Clement. “I really believe you try to surprise and challenge people.”

The designer attributes his sophisticated worldview in part to his European upbringing, and in part to his artist parents, Serge Clement and Maria Kamena. Two of their paintings, reinterpretations of Robert Indiana’s Hope and Love—deftly reimagined as Mason jars—are on display in the living room, where different shades of green play off the chartreuse curtains and throw pillows. “It’s very important that art works with the design,” he says. “It must be complementary to it.”

Case in point: the oversized Chanel poster hanging in the entry foyer, which adds a punch of color to the lacquered gray walls. “The gray is lush and adds warmth,” he says. “Because the rooms are large with high ceilings, I took every opportunity to bring coziness and visual comfort.” A cowhide rug, durable and chic, tops the chevron-patterned wood floors; two lantern-shaped chandeliers are a nod to the region’s storied past.

In addition to his trademark colors—chartreuse, orange, purple and fuchsia—the designer incorporated a variety of metals and textured fabrics into the mix. His obsession with geometrics plays out in large and small ways, as well. He centered a gilded sunburst mirror over the white mantel in the living room; gave a high-gloss reflective finish to the double-pedestal dining table; and crafted tall paneled walls without beveling, for a more modern feel. “I believe in symmetry,” he says. “It’s part of the elegance.”

In the tailored dining room, the pièce de résistance is a Murano-glass chandelier, which looks like a bouquet of calla lilies. “The scale and shape are perfect for the room,” he says. “You have an organic focal point that transcends expectations.” So, too, does the white silk area rug, a bold choice for a house with toddlers. “Accidents happen,” says Clement philosophically. “I believe it’s better to have a stunning house with a few stains. Besides, Fiber-Seal© has really changed my business!”

The back part of the house presents a more casual—but no less dramatic—face. Here, the family room, breakfast room and kitchen flow together as one big open space. Custom built-ins sport Hermés-orange backs; a thick amethyst rug is striped with raspberry; an interlocking lacquer coffee table pulls apart to reveal sides of fuchsia and orange; and lucite chairs covered in persimmon velvet damask hug a hammered-metal breakfast table.

But nowhere is Clement’s penchant for drama more evident than in the home office, with its purple ceiling, rhinestone-trimmed purple lampshades and purple-piped throw pillows. “I said to the husband, we’re not going to do another gray office,” the designer recalls. “Let’s choose a masculine color without being overwhelming. Royal purple is a bold, masculine color. He went with it.”

A version of this article appeared in the February 2015 issue of Connecticut Cottages & Gardens with the headline: Bold Moves.

This article appears in the February 2015 issue of CTC&G (Connecticut Cottages & Gardens).