A Family Home in Amagansett Gets a Contemporary Makeover 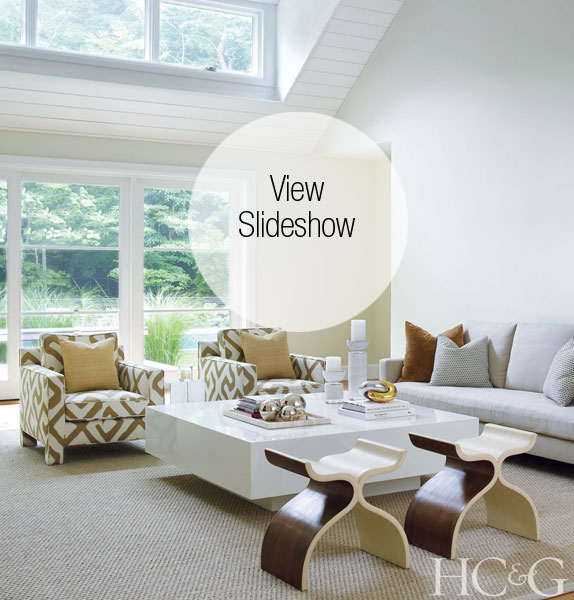 Perhaps one of the ironies of our global age is that the desire for rooms of one’s own has never been stronger. Even in the hot-shot Hamptons, nesting seems to have become the new nightlife.

The same sentiment rings true with some of the talented people who are designing those very rooms. Take Carmiña Roth, who left a high-powered job on Wall Street to embark on a second career as an interior designer. The Yale Law School graduate worked as a hedge-fund manager for 12 years before moving to Greenwich and launching her design business in 2008. Her first client, a wealthy gentleman from the city, had bought a country home in town and hired Roth to do the decor. Friends soon caught wind of her talent, and she was on her way.

Roth’s dreams about decorating weren’t really that difficult for her to fulfill: Even before she made the job switch, she read every design book she could get her hands on, then took on herself as a client after she purchased an apartment in SoHo, followed by a house on the East End. “Decorating has always been my passion,” says Roth, who works often in the Hamptons, where “people tend to know what they want. They do things quickly since they typically want to be in by Memorial Day—no matter what.”

Such was the case with Roth’s client Rebecca Larkin, who had rented in the Hamptons for years with her husband and children, Beatrice, Declan, and J.P., before buying the 4,000-square-foot, four-bedroom house in Amagansett that’s featured on these pages. “We were at a point where we wanted a home of our own,” recalls Larkin, who had seen Roth’s work at another property and found that the decorator’s aesthetic “was really pretty, with varying elements that balanced each other nicely. Carmiña wasn’t stuck in one design sensibility, which I liked.”

The two women met on two occasions in Larkin’s office conference room to go over designs, and Roth came with storyboards full of options. “I found the idea of furnishing the whole house pretty overwhelming,” says Larkin. “But Carmiña was so competent, and really listened.” Roth was just as impressed with Larkin’s decisiveness. “She was the dream client,” Roth recounts. “She told me what she wanted the house to feel like, and picked everything out in our meetings in 45 minutes.”

The biggest challenge was the living room: “It’s ginormous,” Larkin says matter-of-factly. Rather than fill it with lots of itsy-bitsy furniture arrangements, Roth went overscale, installing pieces like an extra-large coffee table that amply fill the space. In the dining area, she convinced the practical-minded Larkin that a set of Panton chairs from Vitra would not only be fun, but also child-proof, an important consideration in a house with three active kids. The chairs’ curvy shape is pleasing to both women, though Larkin wasn’t immediately sold: “I like symmetry and straight lines. But now I love these chairs!”

When it came to the prevailing color palette, contemporary and neutral were the marching orders. “Strong tones are just not the family’s thing,” says Roth, who jazzed up rooms with accessories, like Missoni pillows, on more basic furnishings. “I wanted it to look fresh and summery,” says Larkin, “but even more, it has turned out to be a house where every room is usable. I like that for us.”

“It’s a fun house, and very livable in the end,” says Roth, who has visited a few times since its completion, finding it in pristine condition—despite its being very lived-in. And now she and Larkin are good friends. “We established a really nice rapport,” says Larkin. “The whole experience has been terrific.” Roth shares her enthusiasm: “I wish I had more clients like Rebecca!”

A version of this article appeared in the June 2016 issue of HC&G (Hamptons Cottages & Gardens) with the headline: Hamptons Haven.