A Family Home in Greenwich Gets a Patriotic Redesign 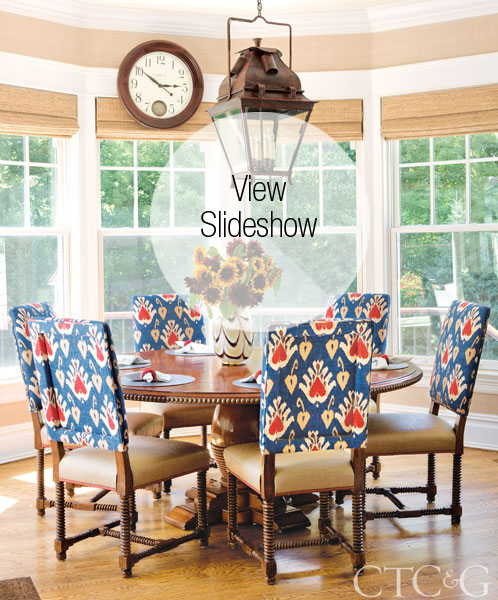 A battle rages on in a house in backcountry Greenwich. But there are never any casualties, only familial harmony and peace within. Painted on the ceiling of the library in this decade-old shingle-style house is an oil-on-canvas depiction of the Gettysburg battlefield, while a dining room wall features a more tranquil scene of the bucolic campus of West Point, from which the homeowner graduated.

“My grandmother’s grandfather survived the entire battle of Gettysburg,” explains David Kim, who owns the house with his wife, Cynthia, “and was wounded on the third day, at Pickett’s Charge, and so I had the campaign map painted for that battle.”

The Kims, who are the parents of four very active teenage children, are unabashed patriots. In 2002, the couple cofounded the Children of Fallen Patriots Foundation, a nonprofit whose stated mission is to “provide college scholarships and educational counseling to military children who have lost a parent in the line of duty.” In keeping with the Kims’ passion, designer John Eason responded with a patriotic interior design, cleverly weaving in elements of red, white and blue. One of Cynthia Kim’s chief directives was that every room not only be distinctive, but also reflect the couple’s beliefs. “John managed to create a sense and feel of patriotism the moment you walk into our home,” she notes.

Eason indulged in colors and patterns, particularly in the living room, with its pair of boldly striped sofas set upon a highly patterned rug. “Here and elsewhere in the house, we used deep, saturated colors, not primary ones, but those with a lot of depth,” he explains. “Colors and patterns this vibrant have character and body.”

Like all good generals, though, Eason knows when to retreat. He created three distinct seating areas in the living room, one of which is an especially restrained space, defined by a vintage portrait of a woman and a dark high-backed, enveloping sofa. While the library ceiling features a scene of tumult, Eason was careful to keep other elements in that room peaceful. “There is so much color going on elsewhere that I wanted to depart here from the reds, whites and blues.” Eason chose a large ottoman as a centerpiece and let the built-in wooden bookcases work to “absorb a lot of energy.”

In the kitchen, the family gathers at a seating area situated in a bright bay-windowed recess. Eason points out the well-weathered surface of the table there, around which are positioned chairs that are half patterned. “We wanted seats that were super durable,” he says, “treated with raffia, since the kids, when they were younger, gave the room a lot of wear and tear. That’s one of the things I admire about the clients—nothing is too precious in the home. They’ve always wanted this house to be well used and welcoming,” adding that this is the second of three homes he has designed for them (a previous house in Greenwich and a vacation property in Jackson Hole).

The master bedroom, too, serves as an always-calm refuge, a study in muted tones with floral draperies and a sculptural fireplace and mantel. “It was never an issue about whether the master suite would be too masculine or too feminine,” says Eason. “The very scale of the room is masculine, there’s a girth to it, yet we kept it delicate with the patterns we chose and the hues.”

While the furnishings, carpets and draperies make design statements, another element stands out: vibrantly hued glass vases and vessels, most of them chosen by Damon Crain, Eason’s husband, a noted dealer in decorative accessories. In every room throughout the home, family heirlooms and ancestral portraits are carefully integrated with newer furnishings and accessories. “The house tells the tale of what this family’s lives are all about, where they’ve been, where they’re going,” says Eason. “It’s about a life well-lived, about being patriotic and about giving back.”

A version of this article appeared in the October 2016 issue of CTC&G (Connecticut Cottages & Gardens) with the headline: Time-Honored Ideals.