A Former Carriage House Is Revived with Accents of the Past 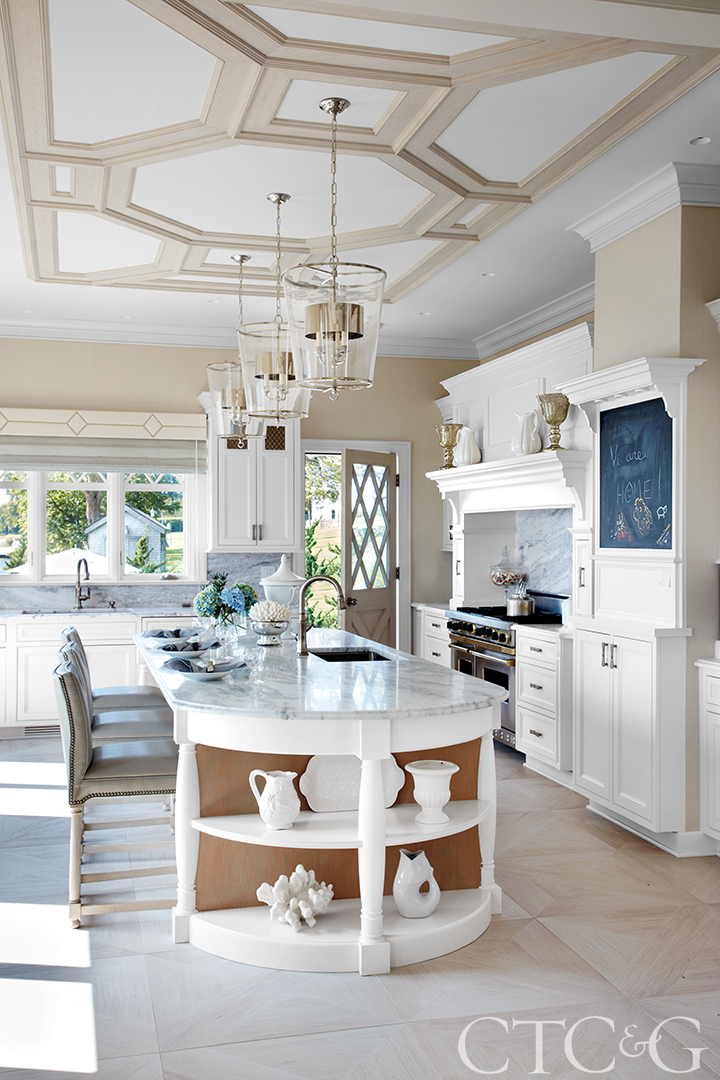 When one longtime Greenwich couple learned their daughter and son-in-law were looking for a house in Darien, they decided to follow suit, trading in their home for a storied place on Long Neck Point. “I’m addicted to Zillow,” the wife says. “One day, while searching for homes for her, I added a couple of zeros just for fun. I saw this beautiful structure and unbelievable view. I thought it would be a great project, perfect for empty nesters and grandbabies.”

Like the area in which it’s set, the Queen Anne house has a lively history. It was built as a carriage house in the 1860s, and changed hands many times over the years, undergoing multiple renovations. It was owned briefly by actor Christopher Plummer, best known as Captain von Trapp in The Sound of Music. By the time the current owners came on the scene, the home had lost much of its charm. “It was very rustic inside,” says the wife. “I am not a rustic person, and I credit Cindy with having the vision and the ability to glam it up.” That would be Cindy Rinfret, the Greenwich-based designer with whom the clients have done multiple projects. In addition to reviving the interiors, they tasked Rinfret with integrating the antiques, artwork and furnishings they have collected over the years, while still maintaining the integrity of the carriage house feel. “She incorporated 98 percent of our belongings,” says the wife. “It immediately felt like home to us and that tickled us pink.”

Before Rinfret worked her design magic, architect Christopher Pagliaro worked his. In addition to taking down some interior walls and moving a staircase, Pagliaro conceived a new corner entry that enhanced the symmetry of the house rather than detracting from it. “The original entry was a little awkward and disorganized, which is why the selection of a new entry point was important,” notes Pagliaro. The turreted addition features walls of glass that create a space that is bright and welcoming. 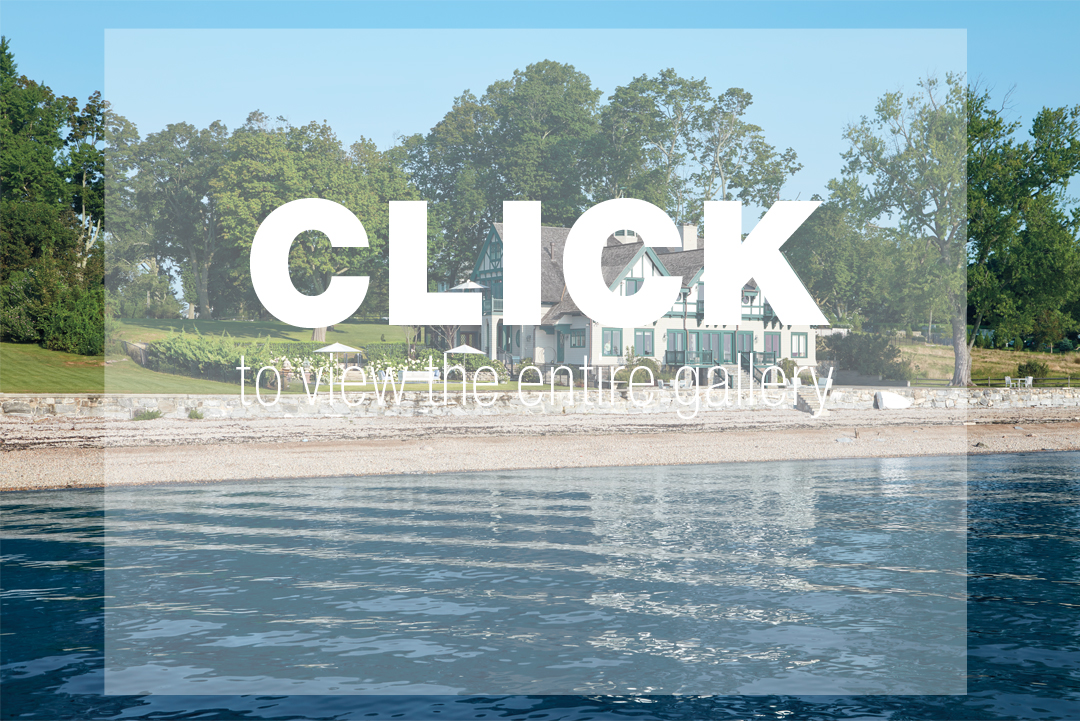 Rinfret and her senior designer Taylor Lagerloef then sought to bring the house back to its more formal and authentic roots, while lightening the interiors and giving them an airy, waterside feel. “The property was not being honored very well. We wanted to restore the integrity,” says Rinfret. “So we added details that would feel as if they were original to the house.”

The open floor plan downstairs adds to the sense of spaciousness and flow. The designer started by cerusing much of the wood throughout, including the original barn doors that open to the library. In the family room, a custom area rug with “blue and stone and bits of brown and cerusy colors set the overall palette,” Rinfret says. She carried the house’s original transom detailing into the dining, living and family rooms, as well as the entry vestibule. Period details and plaster moldings hearken back to the home’s 19th-century provenance, while decorative touches keep the mood light. “We tried to make her antiques feel fresh and new within a relaxed waterside setting,” explains Rinfret. “Think jeans and a silk shirt.”

Case in point: A full bath downstairs was transformed into a jewel box of a powder room that features a washbasin set into an antique table and hand-embroidered Crezana grasscloth walls. Or the living room, where decorative ceiling moldings are the perfect foil for a pair of Charles Winston crystal chandeliers. In the entry foyer, transoms create a bright and airy space, while the patina of a ceramic tiled floor makes it look like it’s always been there. In the library, faux navy leather walls add a contemporary pop, and the ceiling sports a Maya Romanoff wallcovering that’s elegant and playful. “Cindy is the master of the fifth wall,” says the wife.

The spacious kitchen area was transformed with paint, modified cabinetry and a wood-look porcelain floor. A decorative ceiling panel with three Vaughan fixtures ties back to the other rooms downstairs. The space flows into the family room, which has a mirrored bar at one end that is “outrageous,” says Rinfret. “These clients like to have fun. The house is as happy as can be and they love it.” That’s a sentiment echoed by the wife. “It’s a very fun grandmother’s house. My daughter did end up moving to Darien and she has two babies now. They love to come over and splash on the beach.”

The print version of this article appeared with the headline:Queen Anne Revival.

This article appears in the September 2019 issue of Connecticut Cottages & Gardens.

A Vacation Villa on the Greek Island of Milos

In the midst of award season, the legendary star has had a sweet win away from the limelight with this sale.