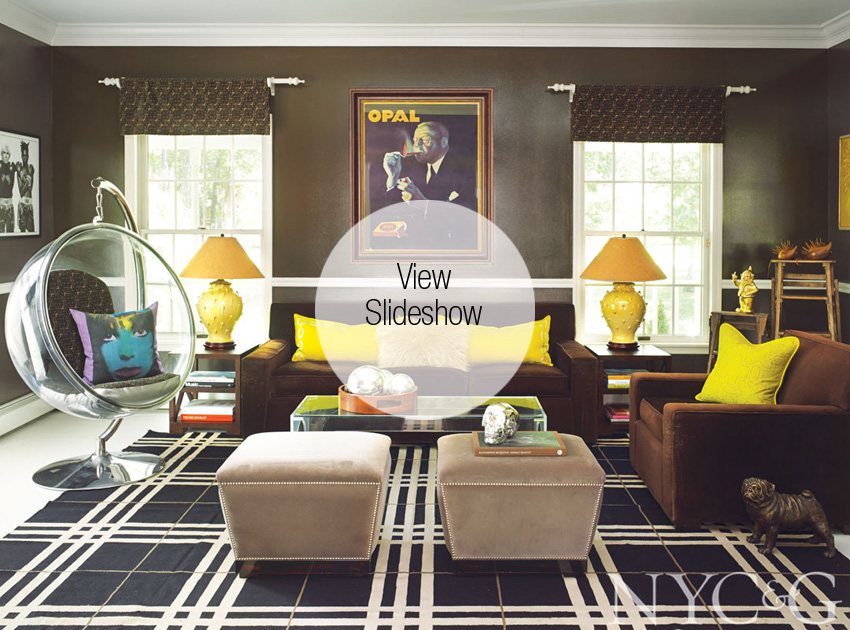 For three decades, Cricket Burns’s days were filled with fashion shows and glamorous photo shoots, where she scrutinized runway looks and styled supermodels and celebrities. But then the former magazine editor decided it was time for a change. “I realized that I was ready to shift my creative energy to interiors,” says Burns, who, in partnership with her husband, filmmaker Richard Burns, launched the design firm Crickets Crush in 2014. “The segue from fashion to interiors was seamless. When you style a magazine cover, it’s as much about the surroundings as what a model is wearing.”

Like most businesses, the new brand also includes an e-commerce component, which allows customers to shop from Burns’s personally curated inventory of furnishings, home accessories, and art. They can also watch the site’s entertaining web series, called “The Jusher,” featuring interviews with artists, designers, and tastemakers, as well as her own makeovers of customers’ homes. When she “jushes” (or zhooshes) a space, she typically combines the pieces a client already owns—often refinishing, rearranging, and reimagining them—with items from her own treasure trove of consigned finds. Her new line of work, it turns out, is not dissimilar to her previous career. “In one day,” she says, “I can make any space look like a magazine cover.”

Burns and her husband, along with their daughters, Manzi, 19, and India, 17, split their time between Manhattan and Water Mill, the location of the light-filled, shingle-style home featured on these pages. Dubbed Window House by her daughters when they were young, the residence is a bold, yet carefully considered mix of contemporary and antique pieces, where daring colors are offset by serene hues and almost everything has a personal story behind it. “Small touches that might mean very little to someone else are the things that make my heart sing and make this house our home,” says Burns, noting shelves filled with framed notes from loved ones, her daughters’ drawings and school detention notices, and German toys from her family’s extensive Steiff collection. In the living room, a sleek, Don Draper–worthy velvet sofa is paired with a playful Lucite bubble chair that belonged to Burns when she was a child. She found the adjacent entry hall’s vintage disco ball, a relic from Studio 54, “at an antiques center in Southampton. It’s falling apart, but I love everything it represents. I can just picture Andy, Liza, Steve, and Bianca boogying beneath it.”

Such juxtapositions are de rigueur in every room, starting in the entry hall, where hand-painted lyrics line the stair treads and a red parrot sculpture holds court on the landing. The lyrics are a touching reminder of Burns’s late grandfather, a banjo virtuoso. “They are from a song that he would sing to all us grandkids, and it is so sweet to see them whenever I climb the steps,” she says. The parrot, on the other hand, is a score from a trip to Reykjavik, Iceland, which she lugged home in her carry-on. “I’m used to sweet-talking TSA officials out of confiscating my treasures,” she says with a laugh. “When I have a gut feeling about a piece, I will go to the ends of the earth to get it home.” Witness the patchwork dome chair in Manzi’s room, which she found in upstate Connecticut and drove home in a Zipcar van; the guest room’s plaster bust of David, made by an artisan in Brussels; and the bar cabinet emblazoned with a portrait of a “handsome Italian man,” a piece that traveled to Water Mill from London’s Portobello Road market. “When we finally got it through customs,” she recalls of the latter, “my husband said, ‘I didn’t know you were such a die-hard Bob Dylan fan.’ I looked at him blankly, realizing my mystery man was actually a portrait from an old Dylan album cover!”

Burns’s light-hearted approach to decorating is at work even in the most mundane of spaces, the laundry room, where a Slim Aarons photo of the Kaufmann House in Palm Springs hangs on graphic red-and-white-striped walls, with two kooky Kaws sculptures providing further whimsy. “I’m a nontraditional, mix-it-up type of girl, and I believe that decor should always reflect the personality of the people who inhabit a home,” she says. “I joke that my Real Housewives tagline would be, ‘A little over-the-top is where I like the view best.’”

A version of this article appeared in the Holiday 2016 issue of NYC&G (New York Cottages & Gardens) with the headline: Camp Cricket.