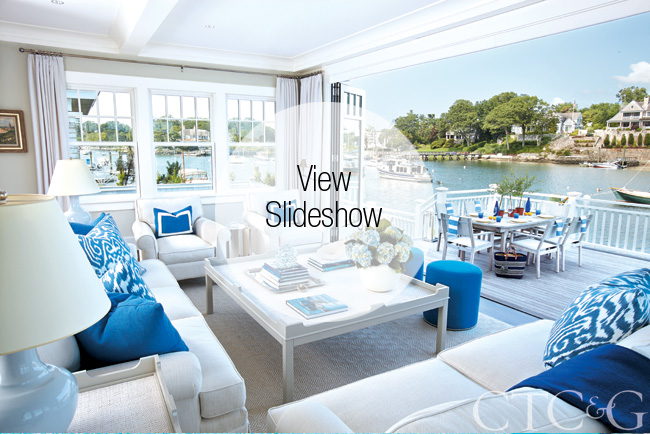 When Schuyler and Charlie Hinnant were looking for inspiration for their new waterfront home in Rowayton, they didn’t have far to go: The building was once a working oyster house, one of several that lined the Five Mile River. “We wanted to keep it true to itself and focus on the oyster theme,” says Schuyler. Located in the historic Oysterman’s Row, the home sits next to the community dock, where a flotilla of kayaks and paddleboards rests on the rocky beach. The couple’s own boats—a Hinckley Talaria 44 and Boston Whaler—are tied up at the end of their gangway. “On the weekends when we’re home, guests will drop by in their boats, and we’ll have a glass of wine on the dock,” says Schuyler.

The couple had lived in the home for years before buying it. “It was Charlie’s bachelor pad when we met,” Schuyler recalls. When they married, they set out to transform the property into the house of their dreams. “It was a new marriage for both of us,” says Schuyler. “We wanted a fresh start.” They envisioned something that would take advantage of the river views, reflect their love of the sea and—most of all—embrace the building’s storied past.

A fresh start was one thing. Starting from scratch, another. “It was a nonconforming house on a nonconforming lot,” says Schuyler. To help bring their vision to life—and navigate the maze of coastal regulations, they hired the South Norwalk–based architectural firm of Bruce Beinfeld. The goal was to keep the original footprint. In order to gain more space, the builder—the Hinnant’s longtime neighbor David Chute—took down the original detached garage and added a new garage to the back of the house. This enabled them to build up, instead of out, essentially doubling the square footage. The interior was gutted and the layout completely reconfigured. From the garage, a central staircase wraps around an elevator, which rises six levels, most with panoramic water views.

“One of the more remarkable aspects of the house is the way it fits together in a three-dimensional kind of way,” says Beinfeld. “We were able to give them so many areas to enjoy, each with its own personality.” The showstopper is the main living area, where a custom kitchen by Deane flows seamlessly into a bright, breezy living room, which leads out to a teak deck. When the weather is fine, the couple can open the NanaWall glass doors that separate the two areas, enhancing the sense of openness.

The biggest challenge, says project architect Mark Goodwin, was creating enough storage space. The architects took advantage of every bit of space, fashioning closets and drawers in the most unexpected spots. The end result is very yacht-like—down to the door latches and cleating hardware.

When it came time for the interiors, Schuyler called on her friend Lynn Morgan, whose office is right down the block. The Savannah-born designer had previously done a home for the Hinnants in Palmetto Bluff. “Sky is very chic, very understated,” says Morgan. “She is the personification of all-American ease.” With that in mind, the designer chose a crisp blue-and-white palette, and played up the oyster and nautical themes throughout.

Stained hardwood floors of oak, mahogany and teak are covered with simple neutral area rugs in sisal and cotton; horizontal shiplap planking is painted a soft oyster hue. In the living room, sofas and chairs are covered in low-maintenance Perennials indoor/outdoor fabric and topped with blue and white throw pillows. A pair of Christopher Spitzmiller lamps grace Oomph side tables. By contrast, the dining room has a moodier, more glamorous vibe, with its silver-leafed ceiling, blue lacquered windows and pearly gray-blue Phillip Jeffries grasscloth walls. An Anne Packard oil painting, which used to hang in Charlie’s office at work, now holds pride of place on the wall between two silver scallop sconces.

“To me, this is just a perfect house for Rowayton,” says Morgan. “It’s the right size and proportion; it has the right stonework. It fits in and makes everyone around them feel good.”

A version of this article appeared in the September 2014 issue of Connecticut Cottages & Gardens with the headline: The Pearl of Rowayton.