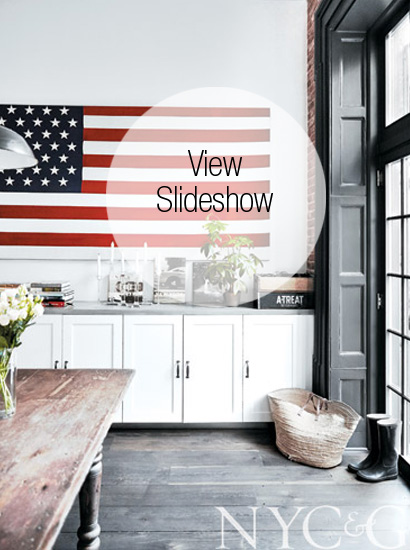 As virtually every New Yorker knows, Brooklyn is “it” right now. Filled with young families, artsy up-and-comers, spry octogenarians, and scenesters aching for a break from Manhattan’s madcap pace, the city’s coolest borough couldn’t dream of a more varied and fiercely loyal populace.

Parts of it have become especially popular with Europeans, notably the French, who are attracted by its well-preserved townhouses and tree-lined streets. On Smith Street in Carroll Gardens, for example, several restaurants feature menus in French, and certain shop signs are written in both English and French. “Some people call Brooklyn ‘Little Paris,’” says fashion executive Florence Mars, who moved to the borough from the City of Light with her husband, Alexandre, an entrepreneur and philanthropist, and their children four years ago. As new New Yorkers, they were happy to find themselves in the company of other French families who have flocked to the area, drawn particularly by the French curriculum at P.S. 58 and the International School of Brooklyn (ISB), both in Carroll Gardens. “People are fighting like crazy to get into these schools!”

The family originally moved to New York for a two-year stint, but a business endeavor of Alexandre’s led to a more permanent stay. (After selling several companies in the U.S. and Europe, he launched the EPIC Foundation in 2014, an organization that helps tackle youth issues in specific countries by investing in NGOs.) At first, the family rented an apartment in Park Slope and enrolled their children—Louis, 11, Alice, nine, and Blanche, five—at ISB. But before long, they had decided that a cultural education in the U.S. trumped a move back to their native France.

Florence settled into a new professional role, as the U.S. president of Bonpoint, the famous French children’s clothing company known for its sophisticated, yet whimsical style. Mars likens her role to that of a conductor: She heads a team that is in charge of retail operations, visual merchandising, marketing, accounting, public relations, human resources, and finance—no small feat for a growing company with a loyal client base, including actresses such as Drew Barrymore and Angelina Jolie, who dress their children in Bonpoint clothes. Bonpoint is more than just about charming children’s outfits, however: It also produces a beauty line, a collection for teenagers and young women, a fragrance line, shoes, even a cruise collection for babies. Bonpoint is classic and “very French,” Florence says, emphasizing also that it’s stylish, but not too serious. And the 40-year-old company has staying power: Bonpoint clothes that Florence wore as a child now hang in her daughters’ closets, long-lasting and still-chic hand-me-downs.

Once the family decided to remain in the States, Florence and Alexandre started the hunt for a home they could own, contacting a broker whom they found through the “French mafia,” Florence jokes. The couple wanted something that required little, if any, work, and preferably a floor-through on one level. After passing on a loft on West Broadway that had no guest room or terrace, they went online, at their broker’s suggestion, to view a townhouse in Brooklyn Heights. Florence was resistant at first. “It was everything I didn’t want!” she recalls, remembering overabundant molding, a gigantic chandelier overtaking the living room, and “everything painted gold.”

But their broker urged them to use their imagination. By this time, they had already seen many houses, most of which felt far too narrow. At 25 feet wide—uncommonly generous for city townhouses—the home would give them the expansiveness they craved. Built in 1851, the landmark property is part of the Brooklyn Heights Historic District. “It was an investment,” says Florence. “I knew that even though we’d spend more time working on it, we could make it our own.” Moreover, the structure had fantastic bones, including spectacular oversize arches on the main floor, plus fireplaces in each room, a garden, and extra space for guests.

But the Marses had never renovated anything before. With keys in hand in December 2012 and their rental lease terminating the following June, they had six months to finish. Picking the right architect was critical, and after interviewing five firms, they narrowed the choice down to Shea Murdock and Kelly Solon Murdock of Murdock Solon Architects. Solon Murdock says the vibe was great from the get-go: “It was one of the most collaborative projects we’ve done,” she recalls. “Our visions for the space were almost identical.”

“I told them I wanted a house where friends could kick off their shoes and relax—and they understood it,” adds Florence, pointing out further that she and Alexandre were amazed with the firm’s attentiveness, efficiency, and budget-mindedness.

Murdock and Solon Murdock came on not just as architects but as interior designers, too. “It was important to Florence and Alexandre to have a specific design sensibility,” Murdock says, and to that end, the decor was kept streamlined, rounded out by rough-hewn elements like reclaimed-wood kitchen shelves and exposed brick, underscoring the very French ethos of quality over quantity. “It shocks a lot of Americans when they see how few things we have,” says Florence, though she cops to a weakness for flea-market finds and antique wares, many from the vintage purveyor Olde Good Things and nearby shops like City Foundry, the Greenhouse, Totally Bruce, and Holler & Squall. Coupled with family treasures and works by French artists such as Guillaume Paturel, the house is inviting and deeply personal. “We love Brooklyn and feel like it’s home. In fact, it almost seems like the countryside—the silence is priceless!”

A version of this article appeared in the April 2015 issue of New York Cottages & Gardens with the headline: Haute Brooklyn.