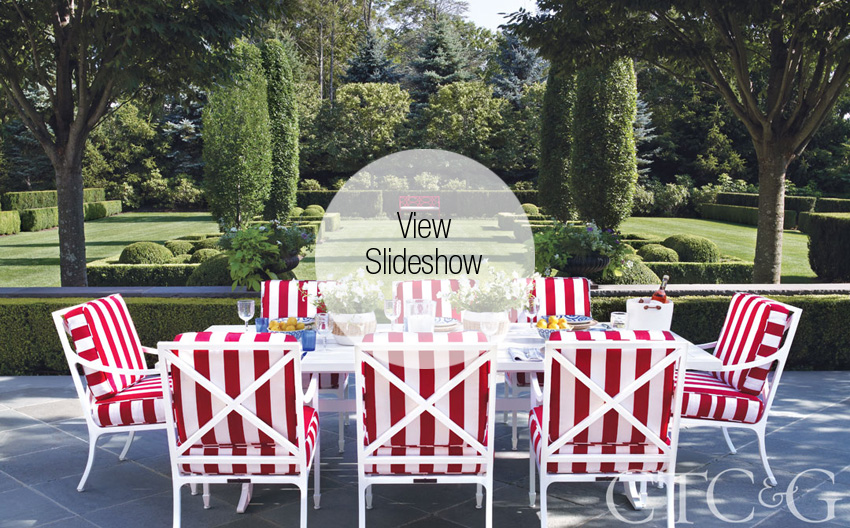 Take a 7,800-square-foot Colonial, set it on prime mid-country Greenwich real estate, and design magic is bound to happen—although sometimes it takes a few tries to get it right. That was the story for the owners of a customized 2004 spec house, who endured several false starts before finding someone to successfully bring their dream home to life. High on their list: someone who understood the elegant use of color, the importance of space and function, and the needs of a blended family of five and a rescue dog named Lacy.

“The ingredients were all there,” explains Lynn Morgan, the Rowayton-based designer who, along with project manager Ashley Stevens, ultimately spearheaded the project to a very happy ending. “The property had great bones and phenomenal gardens. We just needed to bring everything together.”

The couple had lived in the house for several years when they hired architect Sam Mitchell to reconfigure the ground floor. He opened up the space to improve the flow and added custom touches such as hand-carved mantels, pocket doors, a butler’s pantry, and a coffered ceiling in the family room. During this time, they brought in landscape architect James Doyle to transform the grounds. “It was an interesting project because the homeowners had different needs,” says Doyle. “He has a really big interest in the landscape, her interest is more functional. What they have in common is they both like color, especially primary colors.”

To make the property feel more expansive—yet still like a private oasis—Doyle created a series of garden rooms and destinations, incorporating distinct changes in elevation. Each area is characterized by structural green plantings, including mounded boxwoods and European hornbeam. He introduced colors through a mix of perennials, ornamentals and furnishings—a blue bench that edges the pool, a red bench that anchors the formal garden. A small parterre, with a bluestone pathway and stone fountain, serves as a transitional area from the front lawn to the back. “It adds another more intimate dimension that is quite different from the other spaces that are much grander,” he explains.

As the outside of the house was taking shape, the inside was going nowhere. Despite the homeowner’s desire for color and light, a series of decorators kept returning to the same dull, brown palette. “Everything was beige on beige on beige,” Morgan recalls. “It was very dreary.” Her goal? “I wanted to get the house into the same spirit that James had done with the landscaping,” she recalls. “It’s just out of this world.”

The designer started by lightening the walls and painting all the trim a high gloss white. She dispensed with the brown window treatments, brown furniture and brown rugs. In their place, she introduced a cheerful palette of blue and white, with pops of color and touches of whimsy throughout: a yellow Joseph Albers painting in the foyer, red, white and blue striped upholstery in the kitchen, an iconic Slim Aarons photo above a blue bench in the master bedroom, a tapestry of lions in the sitting room.

The result is crisp and clean, with an air of minimalism that not only brightened the space, but made room for the homeowners to showcase their art collection. In the living room, sky blue walls and simple linen window panels are like a “breath of fresh air,” says Morgan. In the dining room, the silver grasscloth walls and blue-lavender with cream swirls rug strike a modern tone, and the once drab butler’s pantry now sports a sophisticated blue lacquer—the perfect backdrop for their collection of Frances Palmer pottery.

One of Morgan’s favorite spots is the downstairs powder room with its red-on-white wall covering and a sign to the right of the mirror, Sunshine. Similarly, in the kitchen, another sign—EAT—captures the couple’s love for entertaining. The palette carries over to the dining terrace, where McKinnon Harris furniture sports a red-and-white striped Dedar fabric, which ties seamlessly back to Doyle’s red bench. “Can you imagine a more beautiful setting?” says Morgan. “It could be anywhere in the world.”

A version of this article appeared in the June 2016 issue of CTC&G (Connecticut Cottages & Gardens) with the headline: The Final Edit.

This article appears in the June 2016 issue of Connecticut Cottages & Gardens.