A Guesthouse Replaces a Barn

A comfortable and modern space for guests where a barn once stood. 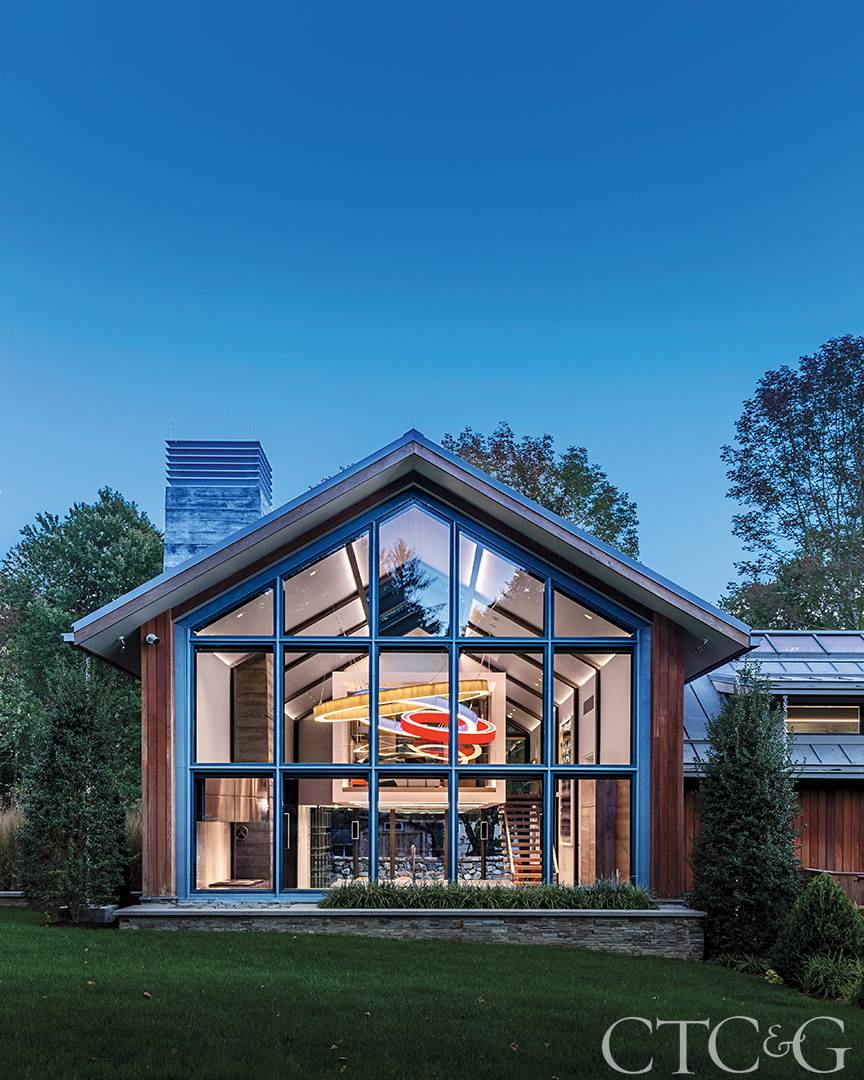 Architect David Spence of Windigo Architecture & Design remembers spending a summer many years ago on a farm throwing bales of hay into a barn, then hauling them up to a loft. “I was allergic to the grass and could barely breathe,” he recalls from his studio in Morristown, NJ, “but I was younger and dating a girl then who lived on a farm in upstate New York, so I did the work to impress her and her father.”

He admits that, perhaps, subconsciously, the experience might have influenced his design for a new barn on the grounds of a Fairfield County property. Spence was commissioned by the homeowners to rebuild a barn as a guesthouse—and the most immediately arresting element he incorporated was a cube-like loft bedroom, a room seemingly free-floating in the vaulting expanse, not so unlike a hayloft. “I wanted it to appear suspended in air,” he says. “To have put in a typical mezzanine would have cut the space in half.” 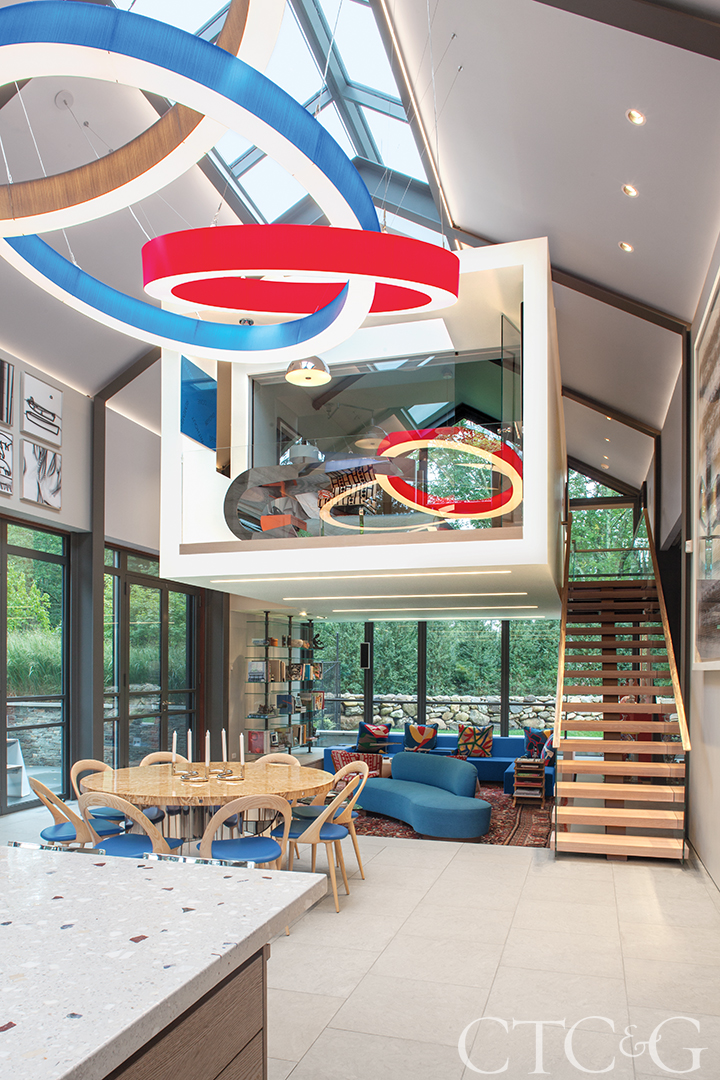 Spence was fortunate to have such design-enlightened clients. The moment he received the directive from the couple to fashion something that wasn’t a traditional barn structure, he responded with a novel solution. An existing barn had collapsed under the weight of a heavy snowfall, but town-zoning required that a replacement structure be of the same size and footprint. Spence and the clients were, however, able to convince the town to set the new structure back farther from the road for reasons of safety, but otherwise, the dimensions of the barn and its L-shape had to remain.

What did not remain was the classic feel of a barn. The traditional post-and-beam architecture of a barn is nowhere apparent. “We expressed structure by a steel frame,” Spence emphasizes. The building materials and palettes he chose were, as he calls them, “comfortable modern,” rather than austere. Brian MacDonald, president of Stamford–based Davenport, further softened the interiors and exteriors by using mushroom boards—textured forms for concrete that resulted in “a building with a lot more character than if you’d used flat cement pieces,” he says.

Apart from the architecture, the interior design by Pamela Ackerman is equally arresting. “In modern architecture, which I consider this to be, furnishings have a certain language,” she says from her office in Minneapolis, where her namesake business is now based (after 20 years in New York). “The clients wanted to make ‘statements’ throughout.” She responded to that, in part, by softening the hard 90-degree angles, with the most dramatic response being a hanging chandelier on a scale to rival that of Saturn’s rings.

Ackerman recalls first seeing the lighting fixture, made of fiberglass and lit with an LED source, at an ICFF (International Contemporary Furniture Fair) event. While the light was intended for use in a commercial space, Ackerman envisioned it visually animating, lighting and defining the barn’s interior. “The firm that made it thought I was a little nuts for wanting to hang it in a residence,” she says, “but when I showed it to the clients, it was an instant ‘Yes!’ from them.” 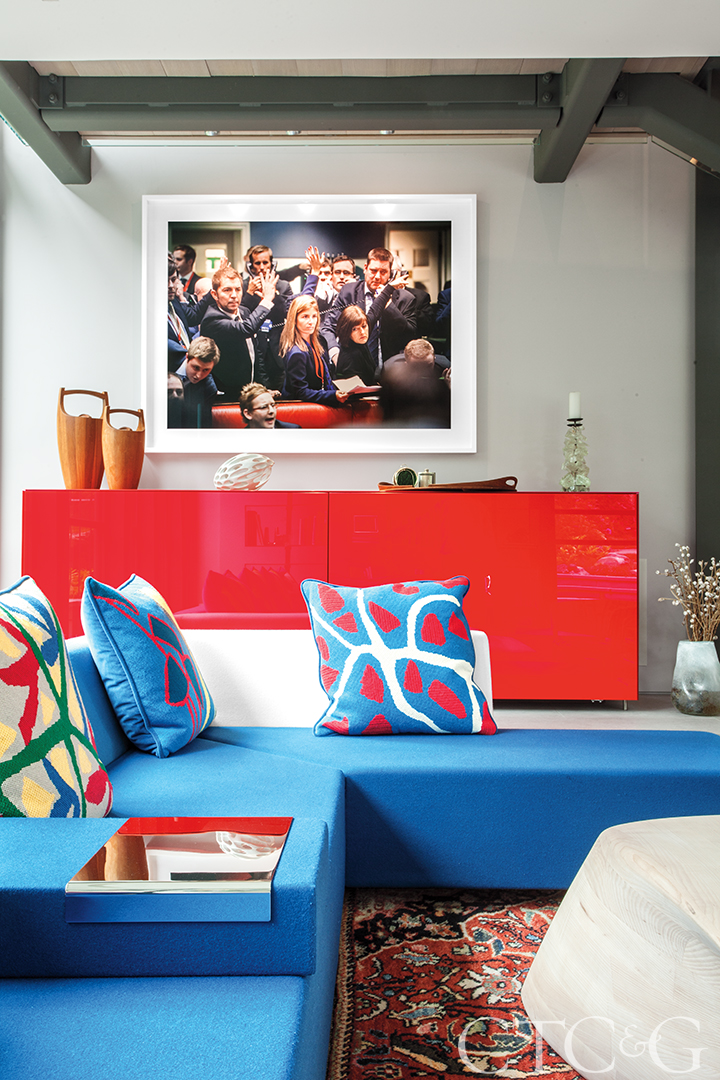 Ackerman adds that the clients are active collectors of contemporary art, and she worked hard to create additional display areas for new pieces, as well as for an existing collection of heirloom Oriental carpets. Of the clients, the designer says, “The husband is a little scared of color, but the wife loves color, as I do.” While color certainly prevails—red stools and cabinets, blue seat cushions, multi-hued throw pillows—so, too, does a muted palette, evidenced by the soft-hued gray of the steel and the cocoon-like feel of the two bedrooms.

“Because the interiors and exterior use such elements as board-formed concrete, limestone, oak floorings, and high-grain terrazzo countertops,” Spence says, “we brought a level of warmth into the home, outside and inside.”

The print version of this article appeared with the headline: Outside the Box.