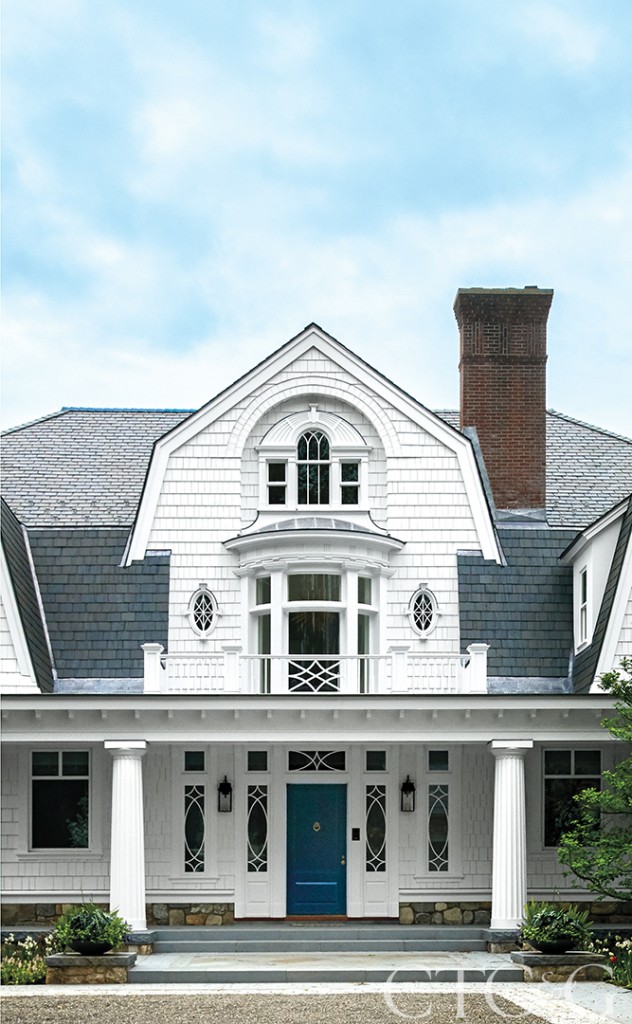 Some buildings are hard to ignore. Take the stately Dutch Colonial graced with iconic mansard rooflines elegantly perched on a New Canaan hillside. Architectural designer Louise Brooks certainly took note. “I’ve been driving by that property for 25 years, and I’ve always wanted to get my hands on it,” she says. Lucky for her a young couple with three children had similar feelings and chose Brooks and her architect partner, Vince Falotico, to restore and update the historic structure, which ended up a star of the 2018 CTC&G-sponsored New Canaan Cares Home Tour.

“I was drawn to the history, and my husband loved the views,” says the wife, who shares that the original 1926 residence burned to the ground and a replica, completed in 1941, eventually took its place. “Our goal was to have a home that was true to the original style, but we have hockey players and lots of kid activities going on so it needed to be comfortable for family life.” But comfortable was not a code word for unsophisticated, and interior designer Kerry Hanson worked hand-in-glove with the architects and Justin Meneguzzo at Yankee Custom Home Builders to preserve the bones, while imbuing the interiors with classic elegance and a freshness in keeping with the vitality of its occupants.

Outside, a new slate roof, shingles replacing old siding, and layers of paint stripped from an existing brick and stone tower enlivened the building. The decision to enclose an existing front porch to improve the traffic flow, however, was a game changer. “We then brought a new porch forward and matched the pillars on the front to the fluted baseless columns on the back,” explains Brooks, noting details on the garage, porte cochere and master suite additions were meticulously matched to the main residence for a smooth transition.

After gutting the interiors and updating electronics and other home systems, the rooms were scaled to better meet current living standards, while a new crisp molding package provided a bridge to the past. “The architecture is historically seamless with the modernization coming through the artwork and furnishings,” Brooks says.

Accordingly, it was the purple and indigo tones in a painting by artist Jasmina Danowski and a blue Lacanche stove that delivered the road map for how the rooms would hang together. “They purchased the painting at a local gallery right before work started on the house, and it became an immediate reference point,” says Hanson, who along with the owners, determined the artwork’s prominent dining room placement. Other spaces—the entry hall with its sea-inspired grasscloth wallcovering and royal blue velvet benches, for example, play off that palette. Even the front door is blue.

But the painting’s most notable side effect is in the living room, where a rich shade of eggplant distinguishes the walls and some of the furnishings. “It was a leap of faith,” admits Hanson about her bold response to the homeowner’s desire for a warm and cozy space intended to draw people in during the winter months. At the same time, the designer’s measured hand created a delicate dance of dark and light with a plush purple sofa balanced by upholstered pieces in lighter fabrics and a soft gray carpet. 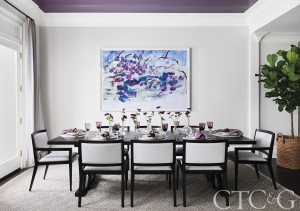 The result was just what the wife envisioned. “I wanted something really dark, and this space can be dressed up and sophisticated or feel just right for hanging out with our family,” she says.

Meanwhile, the powder room swathed in a lively Hermès wallpaper reminiscent of coastal flora continues the dialogue with the rest of the house.“I like that there’s a balance of color throughout and that nothing feels over saturated,” notes Hanson. “But most importantly, the house is definitely a reflection of the owners—classic, warm and not overly formal.”

The print version of this article appeared with the headline: Dutch House.

This article appears in the January 2020 issue of Connecticut Cottages & Gardens.

A Kitchen Designed to be Family Friendly

A Kitchen Designed for Entertaining

With original details and brand new additions, this Colonial estate truly has the best of past and present.