A House Circa-1962 Transforms into a Mid-Century Modern Haven

With trusted design help from Dufner Heighes, a pair of empty nesters tries something new. 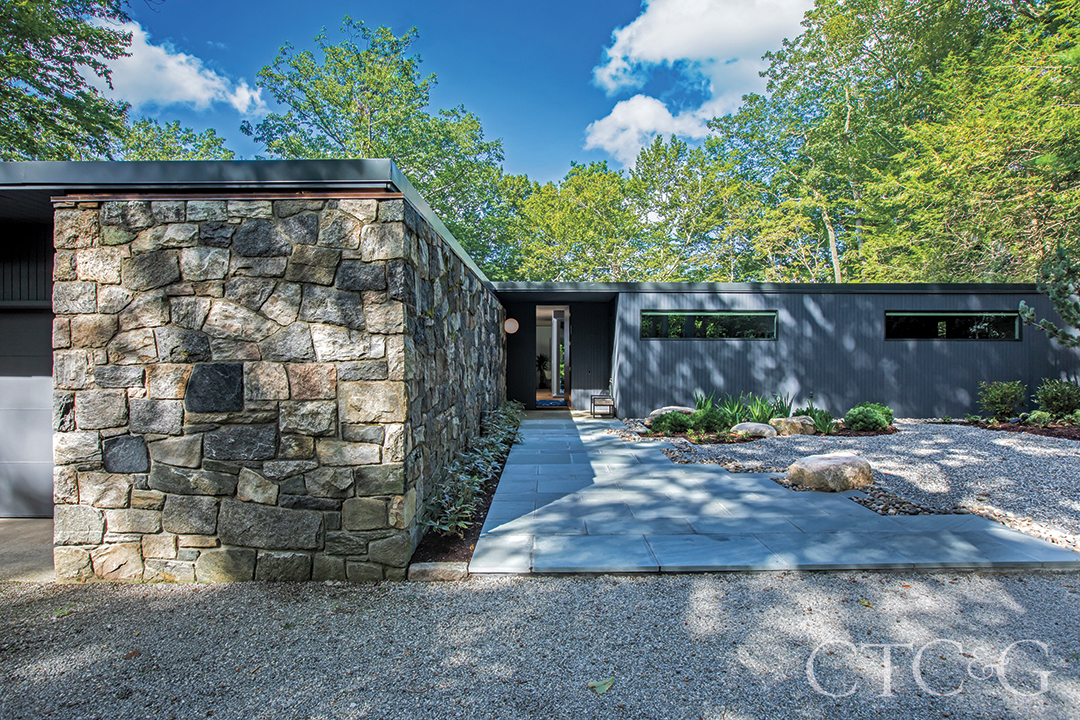 Architectural designers Greg Dufner and Daniel Heighes Wismer of Dufner Heighes updated, renovated and restored a house that was originally built by James Evans in 1962. The house centers around an inner courtyard. Photography by John Ellis

It’s no news story that when children grow up, the parents often look to downsize. In this particular case, though, the move came with a few requirements. Repeat clients of the architectural design firm Dufner Heighes were looking to trade in their current, larger, traditional house for a mid-century modern version, in the suburbs, but—here’s the catch—without the suburban feel.

“We looked at a few houses with them,” says Daniel Heighes Wismer, “and this one [a 1962 house designed by James Evans] ticked all the boxes. It’s a good location to the city but feels secluded—like you are in the country. It is a very unusual square donut-shaped house with a garden in the middle. They fell in love with the site, and, by the time we were done, they were in love with the design.”

The house presented more than a few challenges. “We didn’t want to come in and impose a vision different from what existed,” says Wismer, “but it needed an update.” Adds Greg Dufner, “If anything, we opened the house up more so there is a continuous flow, while being sensitive to what was already there.”

The majority of projects Dufner Heighes takes on involve both architecture and interior design, and this one was no exception. “The problem with modern houses,” says Wismer, “is that when they were doing this, it was all new, so a lot of the details are really rudimentary as they just figured things out on the site while they were building. A lot of the house was in rough shape, and we had to figure out what could be updated or saved.”

They gutted the house—everything but the tongue-and-groove ceilings remained, and replaced or enlarged the windows, while being respectful to its original aesthetic, to take better advantage of the views. They painted the outside a charcoal gray to soften it into the surrounding landscape, which is heavily wooded. “It was really more of an intervention than it looks like,” says Dufner.

Inside, they painted the walls a light gray throughout and used white oak on the floor and white-washed the ceiling. “Everything centers around the courtyard,” says Wismer. “It is a continuous space, and the house is not very big, so we wanted it to flow. We kept it very simple with no jarring spaces. We didn’t want things to seem chopped up or small.” 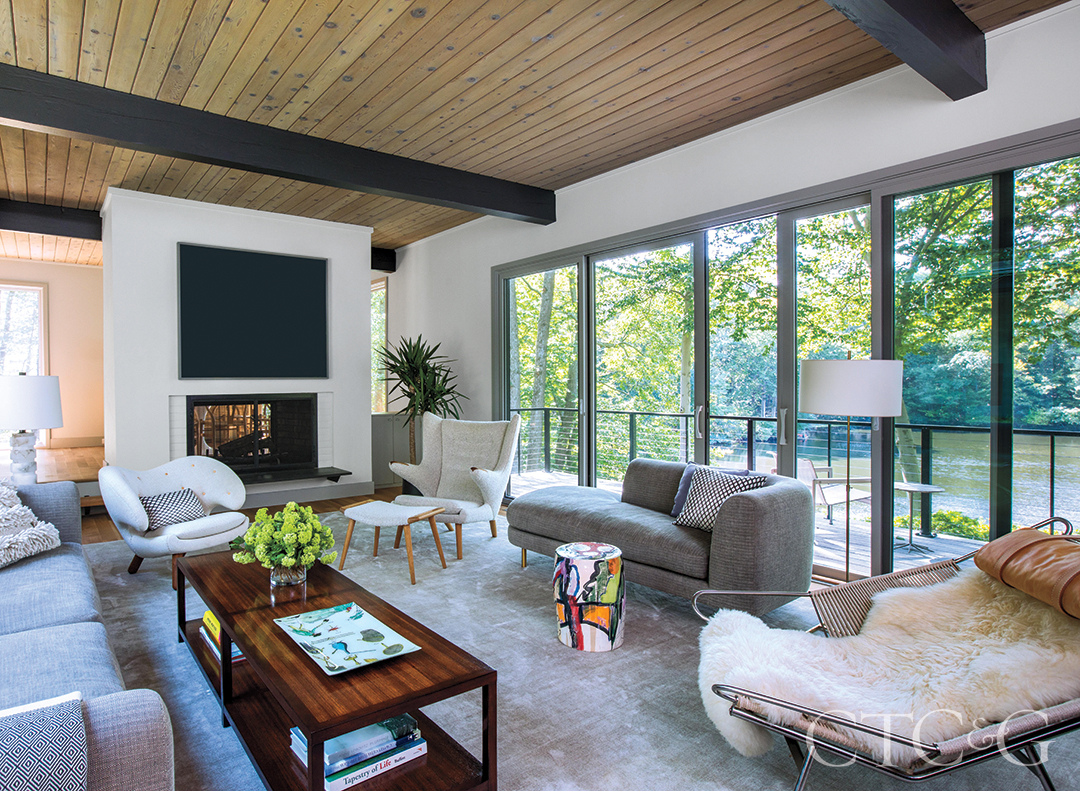 In the living room, a Hans Wegner Papa Bear chair and ottoman sit with a pair of Dune sofas and a Finn Juhl pelican chair. The artwork over the stairs is by Yannick Demmerle through Arndt Fine Art. Photography by John Ellis

The kitchen stayed in the same location, but they took the walls off both ends so that it opens up to the dining room, where they enlarged the window so it looks out over the lake. Like the rest of the mid-century modern home, most of the pieces in the dining room are from previous projects with the clients. A Lindsey Adelman pendant from their townhouse now resides over a Tulip table surrounded by white oak Wishbone chairs.

The living room sits on the other side of the dining room’s double-sided fireplace. It’s a big, long room with multiple seating areas. “We’ve done all these previous projects for them, so we were able to cherry pick pieces and put them in one space,”’ says Wismer. “It was kind of like their greatest hits.” Adds Dufner, “They love Danish design, and it really was easy for us to pull everything together—we didn’t even reupholster anything. The palette from house to house was consistent, so it naturally worked together.” 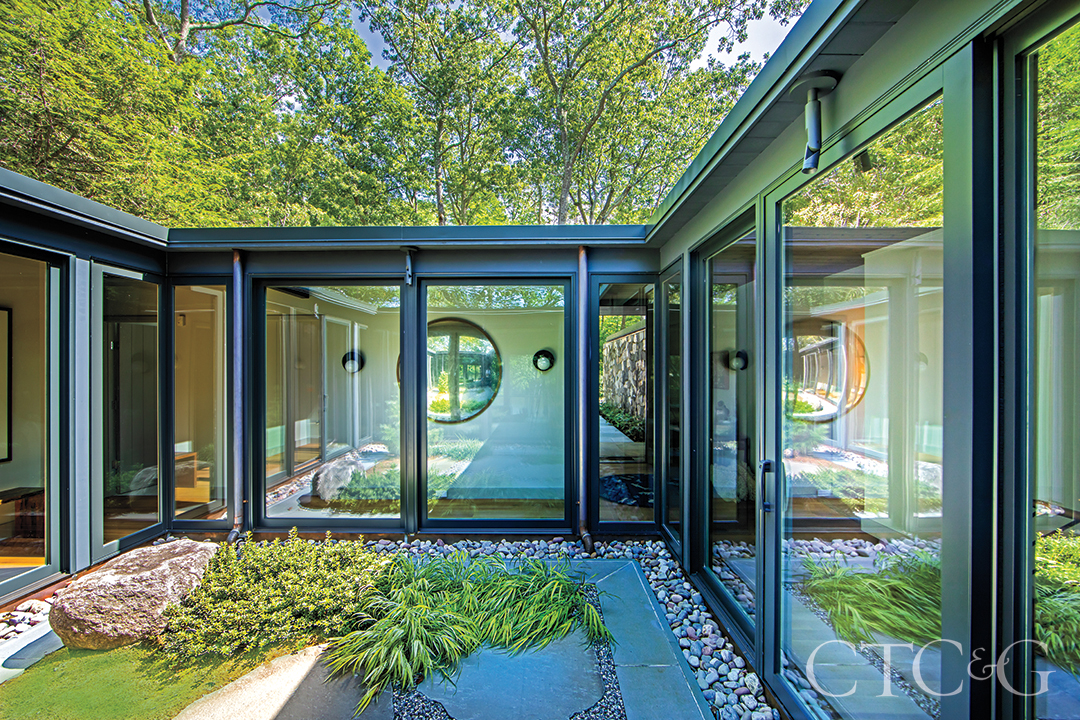 New Pella windows in the courtyard take full advantage of the views. Photography by John Ellis

“They are really great clients and are willing to take some risks even if they don’t understand what the end product is going to be. They went in knowing they wanted a modern house and went after it,” says Dufner. “Half of our projects are repeat clients. It’s a great process from the beginning. There is a trust there. We knew this client wanted a soothing home that felt like an escape. We wanted to respect what was there—a beautiful and simple design.”

Wismer adds, “They were in love with the idea of living in this special space and they had all these amazing pieces. We are always educating them about furniture and how spaces should and could work. To me, this was the graduation of this client.”

The print version of this article appears with the headline: Modern Love.
Subscribe to C&G

This article appears in the July/August 2021 issue of CTC&G (Connecticut Cottages & Gardens).