A Look Inside A Sophisticated Amagansett Beach House 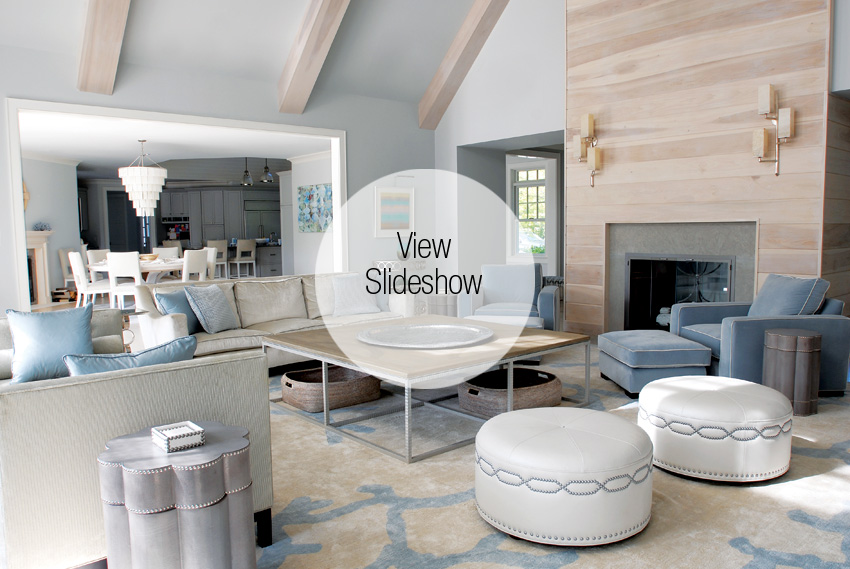 Moments after Jennifer Mabley, half of the Water Mill–based interior design team Mabley Handler, walked into this newly built Amagansett six-bedroom for the first time, she had an epiphany. She cried out, perhaps a little too vehemently, “The best thing you can do for this house is get rid of the dropped ceiling in the kitchen. Show off the interior lines. Let the architecture speak!”

The house, built according to plans the homeowners had purchased, had a living room with an impressive 20-foot ceiling, but the adjacent dining room and kitchen were indeed cause for Mabley’s astonishment, with low, flat ceilings that didn’t do the rooms justice. Right above the kitchen, under the peaked roof at the center of the house’s façade, was wasted space and a lost opportunity: an attic with an attractive oval window that could only be seen from outside.

Talk about a tight turnaround. Within a week of Mabley’s impassioned outburst, the dropped ceiling in the kitchen was gone and the existing structural members had been clad with wood to give them a more finished appearance. The soaring, light-filled kitchen, with a new, decorative truss reminiscent of European barns and farmhouses, was finally worthy of its location at the heart of the house.

Before turning to the interior décor, Mabley and her husband, Austin Handler, completed further architectural upgrades, installing high-end panel doors, moldings and trims with a level of detail Handler calls “transitional”. “It’s a Shingle-style house on the outside,” he says, “so we didn’t want to go totally modern.” They also wrapped the double-sided fireplace that faces both the foyer and living room in raw poplar, tinted with a pale gray-white wash that leaves the wood grain visible, then ran the same poplar over the rib vaulting that traverses the living room’s unusual gambrel ceiling.

The house is the primary residence of a couple with three grown children. When it came time to furnish, they made things very clear: they wanted the interiors to say “beach house,” but not “casual beach house.” “So ‘sophisticated beach’ became our mantra,” Mabley recalls. “The rule was nothing gold, nothing yellow.” Anything rustic was out, as were warm tones. The clients, pointed in their preferences, favored a cool palette—pale oyster gray with a hint of blue—that for them recalls the ocean and sandy beaches on a misty day. “The serene palette was a parameter that helped us zero in on a look and style,” Mabley says.

As with the architectural details, furnishings are clean-lined and contemporary, with just a suggestion of vintage. Individual pieces were chosen for their ability to hold their own in grandly proportioned spaces and against the ethereal color scheme. “With such a cool palette, it was important to bring in texture and depth with rugs, accessories and lighting,” Mabley says. Each room has at least one interesting chandelier; the living room basks beneath three. Silvery metallic finishes on mirror frames, trays and elsewhere—say, the studs on the living room’s ottomans and scalloped side tables or the base of an enormous square coffee table—add sparkle to certain focal points.

Mabley cites the master bedroom as “my favorite bedroom we’ve ever done.” With its silk-velvet tufted chaise longue, mirrored console and white lacquered bed—a modern interpretation on the classic four-poster—the room has a sophisticated, luminous quality. “There may be an undertone of Hollywood Regency,” Mabley says. “Dorothy Draper goes to the beach!” adds Handler.

The media room, or “TV lounge,” on the main floor is a bit of a departure from the basement norm. The homeowners “like to watch movies, but didn’t want to go into a cave to do it,” says Handler. It’s as airy and bright as the other rooms, furnished with pale seating, a white wool rug and intriguing mirrors, lighting and art. The living room, for that matter, is used not just for formal entertaining; the family hangs out there on a daily basis.

With the architectural modifications and cohesive furnishings, the house is now living up to its potential. “There’s both grandeur and comfort, togetherness and privacy,” says Mabley. “The house functions, and the clients are happy.”

A version of this article appeared in the June 2010 issue of HTC&G (Hamptons Cottages & Gardens) with the headline: the Shingle-Style Traditional

This article appears in the June-15 2010 issue of HC&G (Hamptons Cottages & Gardens).