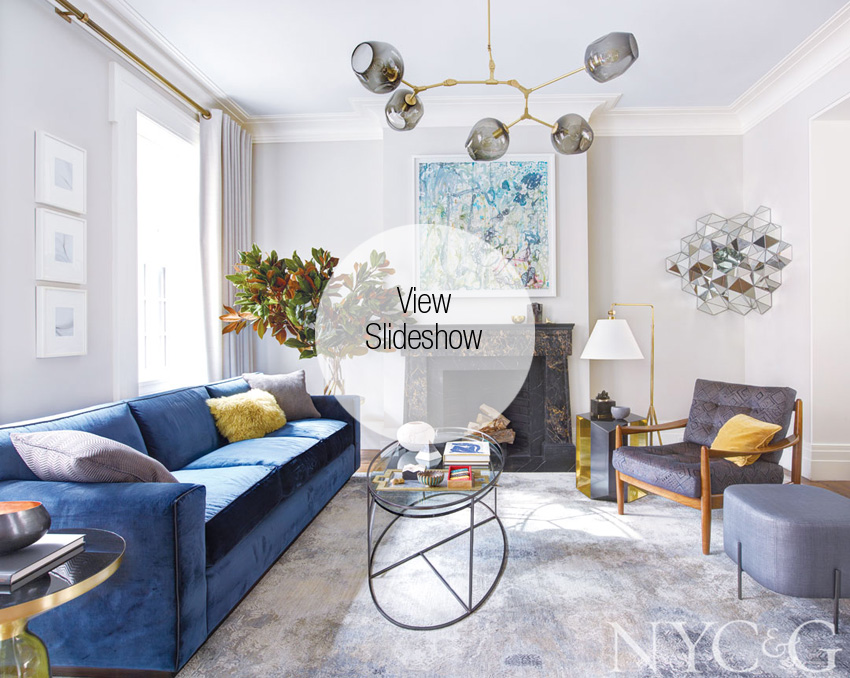 After relocating from London, architect Brendan Coburn’s clients spent more than a year searching for an apartment in Manhattan. Ultimately, they settled on a Greek Revival row house in Brooklyn Heights, and Coburn couldn’t have been more pleased—even though it dates from the mid-1800s and was built atop an old landfill. “I had renovated a house nearby, so I knew exactly what I was getting myself into,” explains Coburn, the founder of Brooklyn-based CWB Architects. “I like technical complexities in any project I do. For me, the more complicated, the better.”

Coburn began by gutting the interior, leaving only the brick-clad exterior walls and the roof. “We had to rebuild the inner volume completely because the carpentry was mediocre,” he says. “Brooklyn Heights is full of pre–Civil War buildings that were built without people really knowing what they were doing.”

Decorators Catherine Brophy and Erin Fearins, from CWB’s in-house design team, Fearins and Welch Interior Design, came on board next, with the goal of creating a sophisticated space that would simultaneously fulfill the needs of a couple with two children. But first, they needed to convince their clients that the majority of the furniture that had traveled with them from London just wouldn’t cut it. “Our challenge was to show them what their new home could be,” says Fearins, a former Nashvillian who joined the firm in 2005. She and Brophy guided the couple through New York’s design showrooms, shopping for sophisticated new furnishings such as a custom wool and silk living room rug from Patterson Flynn Martin. Its blue and gray hues, resembling clouds in a stormy sky, are further amplified by an A. Rudin sofa covered in a navy silk velvet.

“Throughout the house,” says Brophy, “it was important to bring in luxurious furniture and fabrics.” Even the streamlined, functional kitchen features an elegant punctuation mark in the form of a roomy Chesterfield sofa, which serves as seating for meals and overlooks the back patio. “The clients didn’t want a traditional dining room,” explains Brophy, who commissioned local artisan Emmanuel Delalain to design the bevel-edged mahogany dining table. “This area gives them the option of a certain degree of formality while entertaining.”

The kitchen and living room sit on the parlor floor, which has access to the back patio and hot tub, as does the garden level, which can be configured as a separate rental apartment, although currently the owners use the surprisingly airy, light-filled space as a less formal place for the family to hang out in. The upper floors comprise the children’s bedrooms and separate baths, along with an ample master bedroom and a cozy and sumptuous study, replete with a marble fireplace surround. The adjacent mahogany-walled “tub room” features a deep rectangular bathtub clad in Nero Marquina marble. “The husband takes books and a paper in there and just lets his ideas flow,” Brophy says of what she playfully, and somewhat literally, refers to as his “think tank.”

Offsetting the tranquil, calm interiors is the clients’ bracingly dynamic art collection, ranging from a glitter and watercolor on hand-cut paper to a sculpture of mirror and lead that juts from the corner of a living room wall. “I like clients who have a strong eye and want to introduce their own aesthetic,” says Fearins. “In most projects,” Brophy adds, “there comes a time when the homeowners start to bring in pieces that they’ve found themselves. Decorating a house is almost like giving birth—you realize that eventually the home has to have a life of its own.”

A version of this article appeared in the September 2016 issue of NYC&G (New York Cottages & Gardens) with the headline: Brooklyn Bound.