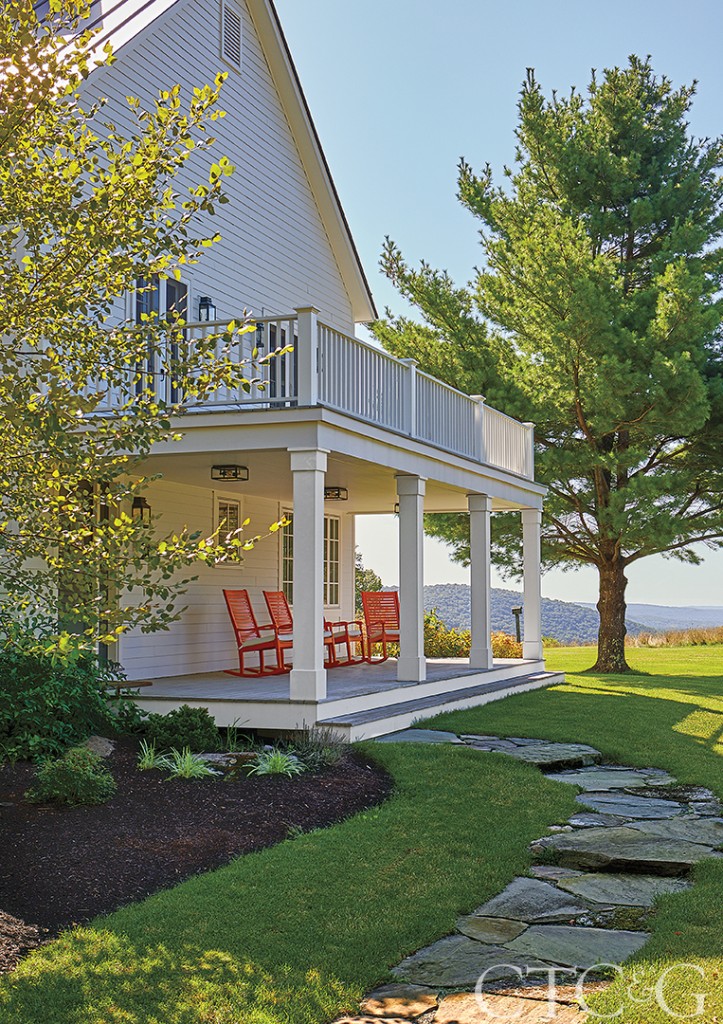 Every house has a secret. But one of the secrets of this South Kent residence is in open view for all to see, though it might require some careful looking. “From the start, the homeowner said she loved orange,” says Claudia Kalur, the Washington Depot–based interior designer who created the look of the rooms in this home, “but that her husband doesn’t. She wanted to get as much of the color inside as she could without him noticing.

Indeed, the homeowner, who works as a corporate strategist, admits, “I love orange because it’s a fun color, has high energy, but my husband just doesn’t love it in the same way.” As Kalur recalls, “We were careful to bring in different accessories with that color but not so many that her husband would object. When the client and I finally chose to put orange outdoor furniture on the front porch, she looked at me and asked, ‘Don’t you think he’s going to notice?’” He has noticed, but even he is happy with that welcoming accent. 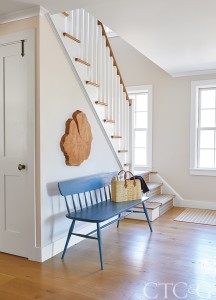 There is much to notice about this house situated atop a grassy hill in Litchfield County. When the couple bought the home as a weekend retreat from their Flatiron loft, they were intent on creating a place that would “feel immediately serene and calm and comfortable,” says the client. “We arrive there usually in the dark on a Friday night, but the moment we wake up on Saturday morning, we feel transported. The rooms are white and bright and filled with sun in a way that our loft in Manhattan isn’t.”

The work on the 1980s house began with a significant demolition of a hodge-podge of additions made over the years. Architect Daniel Frisch had the entire right side of the original house knocked down to make for a far more cohesive architectural addition. “I would call what we created a ‘modern farmhouse,’” he says. “It’s about clean lines, clean materials. Claudia’s work on the interiors was about creating something very real, not some fake country aesthetic. She did all of the furniture and some of the new materials—I liken her to being the ‘interiors whisperer.’”

One of Kalur’s directives, both from the client and to herself, was to make rooms that could easily accommodate the homeowners’ three young children. “They wanted the home to be comfortable and kid-friendly,” says Kalur, “but at the same time to be a space used by grownups, who like to host parties and dinners.” A key response to that directive was for Frisch to design a massive kitchen island. “I’ve been in so many homes now that feature an island large enough for a group of people to stand around,” says Frisch. “These days, if you have a party of 40 people, 30 are going to wind up staying in the kitchen. The island I designed is a blind admission of how young families live today. Parents of kids like to gather in the kitchen, with their kids, even more so than at the breakfast table.” 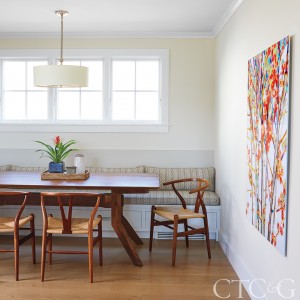 While Frisch acknowledges a fact of domestic life in the early twenty-first century, Kalur emphasizes, though, that the breakfast area that melds with the expansive kitchen is “where everything ends and starts in the house. The family eats and hangs out there and every time I visited with the client, we’d begin at that table and end up at that table.” That light-filled space is especially welcoming with built-in banquette seating, augmented by sculptural yet comfortable Wishbone chairs.

The client admits to being “particular about every piece of furniture and how it’s oriented in a room,” but she also deferred to Kalur for her vision and expertise. “Claudia masterminded the whole project and sourced everything. She brought in a ton of great ideas that made this home as comfortable as it is.”

Kalur, too, is pleased with her work and notes one of her biggest accomplishments: “The master bedroom needed to be especially calming and soothing, so there’s no orange anywhere in it.”

The print version of this article appeared with the headline: Home on the Hill.

This article appears in the January 2020 issue of CTC&G (Connecticut Cottages & Gardens).