Excerpted from, In & Out of Paris: Gardens of Secret Delights (Gibbs Smith, 2014) 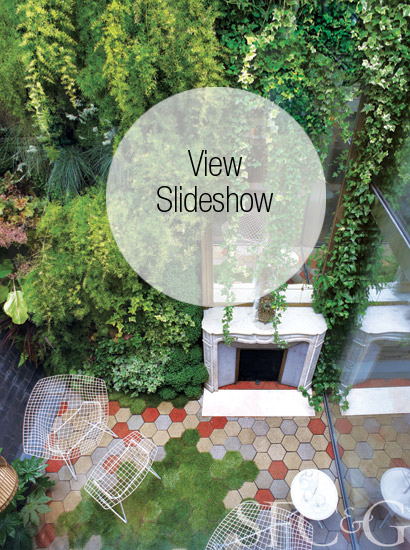 Corbusier’s historic terrace is gone, but photographs show how its high railings obscured all but the tallest landmarks from view, while a periscope, installed in de Beistegui’s penthouse, popped upwards to look at city views. In the terrace, a fireplace and a mirror above it, a stone replica of a wooden commode alongside garden chairs and a parrot on a bird perch atop a “carpet” of lawn were all archetypal symbols of domesticity used to blur the line between “inside” and “outside.”

Herrman removed the walls between a dozen stacked maids’ rooms to form his sixth- and seventh-floor duplex under the eaves, and then added steel framing for a clear glass ceiling above the living area to bring daylight to both levels from a light well between the L-shaped apartment and two neighbors’ walls.

While Corbusier obscured views, Herrman emphasized them. He used clear 10-by-10-foot sheets of fixed and sliding glass partitions to link the interior to the light well, now reconfigured as a minuscule courtyard filled with modern room furnishings and de Beistegui-esque motifs such as a birdcage, a gilt-framed mirror and garniture atop a marble fireplace.

Herrman’s open-to-the-sky tableau in its 20-foot-high “vitrine” has another exciting difference—a vertical garden inspired by botanist Patrick Blanc’s mur vegetal for the Musée du Quai Branly, where Herrman had assisted the museum’s architect, Jean Nouvel. Its vines and herbaceous foliage hanging on the neighbor’s windowless wall make it easy to believe that the fake patch of grass in the courtyard, sprouting in between woven vinyl replicas of the apartment’s original hexagonal terra-cotta tiles, is real.

The young designer also devised a hi-tech periscope—a rooftop digital camera—that live-streams views of the Eiffel Tower and nearby Madeleine Church, as well as the occasional bird flying overhead, into a monitor camouflaged as a framed mirror on the dining room’s ancient stone wall.

“I wanted to play,” Herrman said, “with the idea of inside and outside, upstairs and downstairs and past and present as surreal reflections of each other.”

A version of this article appeared in the April/May 2015 issue of San Francisco & Gardens with the headline: Oasis in the Eigth.