A New Wine in Town

Sagrantino wine, made from grapes unique to Umbria, is making a powerful statement.

Spice, wood, balsamic, black cherry, dark chocolate and animal hide is how Perticaia winemaker Alessandro Meniconi described the flavor of Sagrantino, an indigenous variety found only in Montefalco, Umbria. The Umbrian wine region has strong hopes that Sagrantino will join the short list of Italy’s internationally recognized wines, alongside Barolo, Brunello, Barbaresco and the Super Tuscans.

“Sagrantino has a lot going for it,” said Meniconi, over Strangozzi pasta with truffles at L’Alchimista café in Montefalco. “It’s the ideal autumn wine, goes perfectly with all things wild. It works with strong-flavored foods, especially game. With its strong tannins, it’s one of the healthiest wines on the planet, loaded with polyphenols.” His list of matches for the savory wine includes wild boar, barbequed meats, Gorgonzola cheese. He told of an Aussie wine critic who proclaimed it the perfect pair with kangaroo and crocodile.

Winemakers in Montefalco are optimistic about their strong personality grape, which was a sacramental wine for Franciscan monks in medieval times. Marco Caprai, considered the father of Sagrantino, spent 20 years getting professors at the University of Milan to do extensive research on Sagrantino and then spreading the message of this indigenous variety to the world. It’s working. Wine Enthusiast named Arnaldo Caprai as the 2012 “European Winery of the Year.”

The Lunelli family of the Ferrari sparkling wine empire in Trentino invested millions in building a masterpiece winery/art museum, which opened a year ago. Tenuta di Castelbuono is contained within an enormous Arnaldo Pomodoro architectural sculpture of a copper-topped tortoise that appears to be crawling up a hill. Contemporary sculptures line the vineyard-strewn path up to the winery. Art installations continue within the structure with an inner subterranean “heart” room and even into the circular barrel cellar, where each barrel wears a red cardinal’s cap.

Sagrantino has powerful flavors, and it takes patience waiting for it to age and soften the tannins. And those tannins have challenged winemakers to tame them into a more refined version. At another new contemporary sustainable winery, Tenuta Bellafonte, Peter Heilbron describes his methodology: He doesn’t press the fruit, uses natural yeasts and ages for three years in large Slavonian oak barrels (which impart minimal tannins). 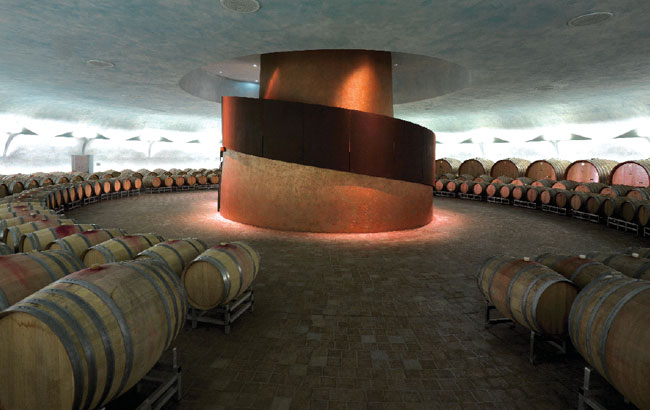 Devis Romanelli, a young winemaker at his family farm-winery, Romanelli, which is known for its extraordinary olive oils, is also working to achieve a more refined and balanced Sagrantino. His viticulture is strictly organic. He uses no herbicides, and pest control is through a system of small birdhouses that attract birds to eat the insects and larger falcon houses to keep the mice population down. I tasted his just released ’09 Sagrantino, and it is rich on the nose and very elegant.

Over three days, I made the rounds through the scenic countryside with surrounding mountains and medieval fortified stone villages—Assisi, Spello, Perugia, Bravagna—to top producers of Sagrantino. Scacciadiavoli (translates as “cast out the devils”), the region’s oldest estate dating back to 1884 with ancient wine caves, was once owned by a prince and named for a 19th-century exorcist who lived in a village bordering the vineyard. Scacciadiavoli makes wonderful Passito (the sweet version of Sagrantino done with dried grapes) and also lovely Sagrantino.

At Antonelli, another of the older wine estates with 420 acres that the family purchased in 1881, there’s also a cooking school and a huge forest with nature trails. At Le Cimate, a modern winery at the top of a hill with a 360-degree view of the stunning countryside, tourists can organize tastings with cheeses and charcuterie, lunches or dinners cooked by professional regional chefs.

And every wine region has its charming mom-and-pop producers. At Colle Del Saraceno, a blessed spot with high-altitude vineyards overlooking Spoleto, Assisi and Roman Road Flaminia, travelers come from all over Europe to buy the Botti family’s award-winning old-vine Passito with its label picturing a cavalier from a Benozzo Gozzoli fresco.

My final stop was Colle Ciocco, a winery established in 1935 by one of Montefalco’s original five wine families. Here, I got one more theory of taming the tannins by aging the Sagrantino five years (instead of four) and a sip of Passito paired with an almond biscuit (never pair it with dark chocolate, the Spacchetti family insists).