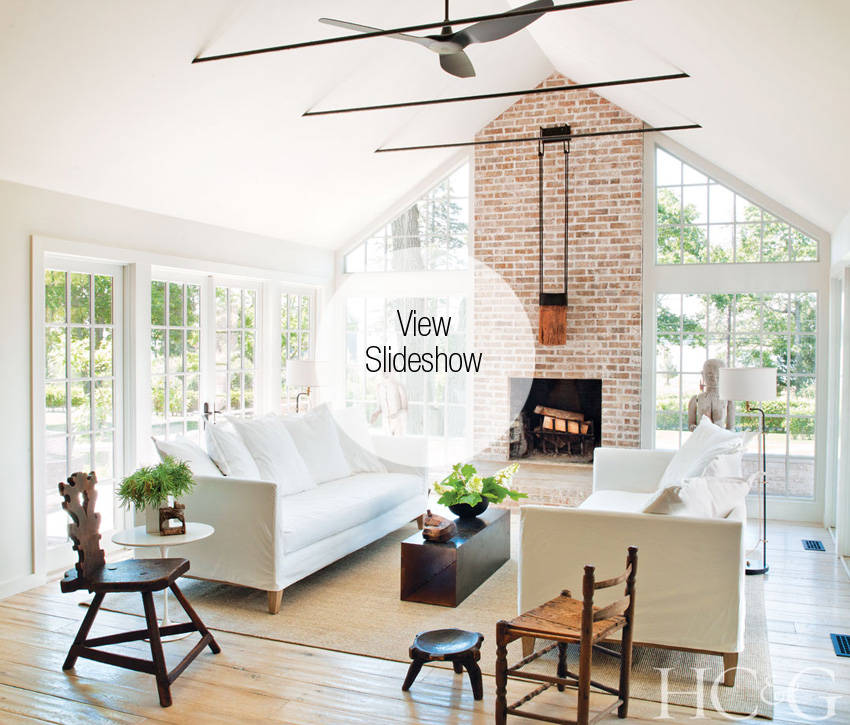 For years, interior designer Rhea White and architect Steve Schappacher lived and worked in Manhattan and spent weekends on Shelter Island. But once they were on the island, they found it increasingly difficult to leave. “We dreaded Sunday nights,” recalls Schappacher. “And pretty soon, Sunday nights turned into Monday nights, and then Tuesday nights.” The summer before they became permanent residents, they spent only seven or eight nights in the city, so “we decided to refocus and move to the island full time.”

“Between our mortgage payment and the parking garage payment and everything else,” White adds, “we were spending around $2,600 a night. We could get a kick-ass hotel room for $2,600 a night!” Even so, White remained apprehensive about the move at first, not fully committed to the idea of not living in the city. “To this day, half our garage on Shelter Island contains a lot of stuff from our city apartment. Just in case I got nervous one day and had to go back.”

Not to worry: The pair, who are the principals of the firm SchappacherWhite Architecture, still get out and about. They recently completed Wm. Farmer & Sons, a restaurant, shop, and boardinghouse in Hudson, New York, for an entrepreneurial couple they met at a friend’s birthday party, and they’re also at work on a large renovation of an 1820s farmhouse in Bridgehampton, a restoration of a mid-20th-century-modern Ulrich Franzen house in Essex, Connecticut, and a ground-up structure in Mill Valley, California—not to mention several projects on Shelter Island.

The couple originally lived in a small farmhouse on Shelter Island and didn’t take local jobs, preferring to keep a safe distance between work and pleasure. But they couldn’t resist signing on for a handful of architecturally driven projects nearby, which led to the realization that their home was far too cramped to accommodate both their professional and personal life.

Their new house, which dates from the 1920s, was originally a single-room cottage with a stone fireplace. Added onto over the years, it had become an agglomeration of not particularly attractive little buildings and enclosed porches. Schappacher and White ended up demoing about 50 percent of it, while trying to maintain the integrity of the component parts. Then they expanded it, creating a nonlinear layout that they say they probably wouldn’t have done had they started from scratch, and turned the freestanding former garage into their office, increasing their commute from none to about 20 seconds.

The new office is a boon, considering that the house sits on the easternmost edge of Ram Island, a remote extension of already remote Shelter Island, accessible only by causeways. “When it snows,” White says, “we turn on the outside lights so the snowplows realize there’s somebody here and come and plow the road. It gets a little desolate, but we love it.” The house’s distant locale calls for regular entertaining, often in the form of large dinner parties—sometimes for as many as 20 people—so the kitchen is necessarily immense. “People always say they want to help at our parties,” White says with a laugh, “but what they really want to do is sit around and drink and watch you work!” Fortunately, Schappacher has plenty of room to cook, and everybody else can socialize and mingle around the 14-foot island without knocking into one another. “One friend said to us, ‘This isn’t a kitchen, it’s a loft,’ and that was the idea,” says Schappacher.

Furnishings in the kitchen and throughout the house tend to hew closely to a chic, stark palette of black, white, and taupe—much like a modern Manhattan aerie. Deeply layered textures, from nubby linen fabrics to the hand-scraped floors, make up for the lack of color. “Our friends are such a colorful cast of characters already,” White says, “that we don’t want our house to compete with them.”

Not that their place, all polished and new, can’t hold its own. In fact, White feels so at home that she considers herself a true Shelter Islander now. “We’ve been here several years,” she says. “I think we can finally have that garage sale.”

A version of this article appeared in the September/October 2016 issue of HC&G (Hamptons Cottages & Gardens) with the headline: Island Outpost.