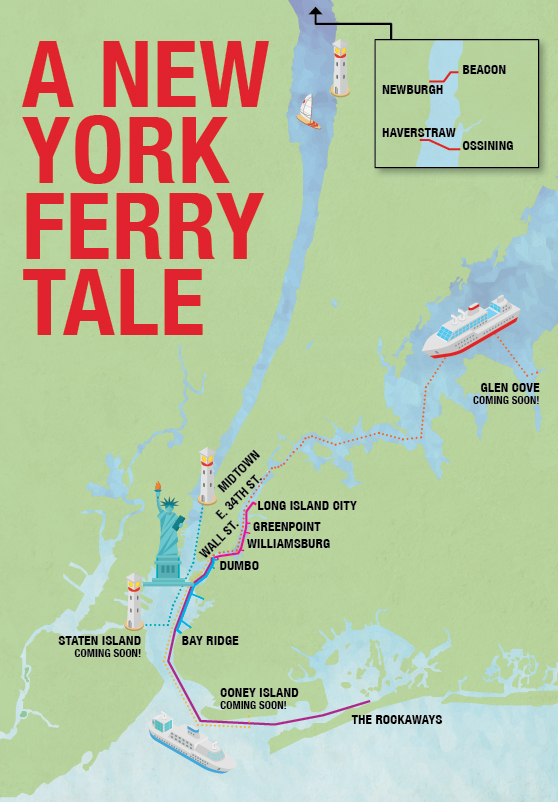 Commuting to work by ferry may seem like a quaint throwback to times gone by, but more New Yorkers are relying on expanded ferry service to get where they need to go. Hornblower, a private company that launched the NYC Ferry in 2017, reported last September that it had welcomed roughly 7 million riders during its first 18 months of operation. Since its inception, the network has grown to six routes, including an East River line that runs from Wall Street to East 34th Street (with stops in Dumbo, Williamsburg, Greenpoint, and Long Island City), a South Brooklyn service that originates in Bay Ridge, and one that links the Rockaways to downtown Manhattan. In addition, two new itineraries—one from Staten Island to Manhattan’s West Side, and the other from Coney Island to Wall Street—will launch in 2020 and 2021, respectively.

There’s no doubt that the city’s expanded ferry opportunities are affecting residential real estate—especially along the water in Brooklyn and Queens where subway stations aren’t as prevalent. According to Oren Everhar, the president of the development company behind the new 44-unit condo building 50 Greenpoint, the nearby Greenpoint ferry station “has improved the neighborhood and made the waterfront a much more accessible place to live.”

Of course, ferries aren’t an entirely new idea. Since 1986, NY Waterway has run a successful operation transporting passengers between lower Manhattan and New Jersey. Upstaters have also taken to the water, thanks to NY Waterway’s cross-river shuttles between Newburgh and Beacon and Haverstraw and Ossining, giving commuters in Orange and Rockland counties easier access to Metro-North Railroad stops on the east side of the Hudson. Even in tony car country on Long Island’s North Shore, residents will soon have access to Manhattan via less stressful means: In 2020, the town of Glen Cove will begin providing ferry service to East 34th Street and Wall Street—a special bonus for homeowners and tenants of the 1,110 luxury condominiums and rental apartments in the new Garvies Point development.