A Nonstop Flight From New York, This Captivating City On The Caribbean Coast Really Has Sol 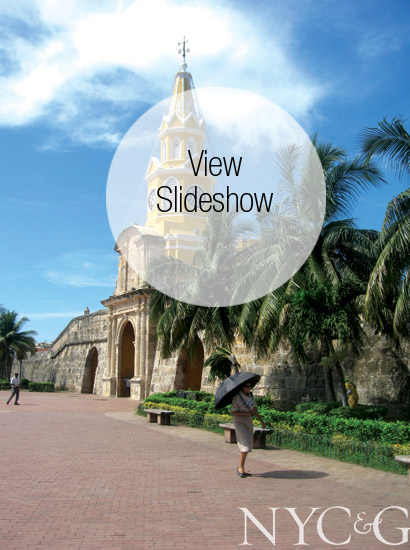 Founded in 1533 by Pedro de Heredia, a Spanish explorer and prospector, Cartagena de Indias, Colombia, was a major center of trade for gold, silver, emeralds, and other precious treasure and amassed great additional wealth thanks to African slave labor.

Predictably enough, it was a prime target in pirates’ sight lines, and to protect it, the Spanish government constructed the now-famous murallas, or walls, that encircle the city’s historic center, today a UNESCO World Heritage Site.

You can walk in virtually any direction in Cartagena and be immediately seduced by the bougainvillea-draped Colonial architecture, the noble churches with their pregnant bell towers, the

multitude of convivial alfresco restaurants, the chic shops and informal street-side markets, and vendors selling everything from piping-hot arepas to tiny thimble-sized cups of café (days are languorous and warm, it’s a late-night town, and an afternoon siesta is always a temptation).

A good place to start off a tour is the Museo del Oro Zenú, which documents Cartagena’s growth from the gold trade as well as its susceptibility to plunderers. Here, historic gold pieces from various regions nearby—Tumaco, Nariño, Calima, Tolima, and Cauca, among many others—are beautifully displayed, including everything from fragile jewelry and fishhooks to headdresses and birdman figurines made from the ancient lost-wax method. The Zenú imagined the world as a woven fabric of living people and created filigreed confections with intricate openwork, straightforward yet dazzling in their complexity.

On the other side of the sleepy, leafy, four-fountained Plaza Bolivar—the site of lively indigenous dance performances each evening—lies the fascinating Palacio de la Inquisición, created in tandem with the Inquisition in Spain but only active for about 40 years, as the Inquisition was abolished in 1812 and the palace was not completed until 1770. Still, it’s fully kitted out, with a House of the Dungeons featuring 13 collective cells where prisoners awaited judgment, facing the impossible task of weighing in at a ridiculously precise amount (in proportion to their height) in order to avoid being deemed a witch. The “method” was so exacting that no one was ever found innocent, and therefore faced punishment by brutal means, such as by garrote (an asphyxiation chair), garrucha (a device that tightened the extremities), plain-old beheading, el aplasta cabeza (a jagged-tooth head-squishing machine), or el aplasta pulgares (a hand-crushing contraption). Most of the devices on display were never used, though the pain they could inflict is palpable even today.

Much more forgiving is the exquisite cathedral of San Pedro Claver and its adjacent sanctuary, now a slightly tattered (in a good way) museum. The cloister dates from the beginning of the 17th century and was the home of San Pedro Claver, a Catalan who studied in Bogotá and worked as a missionary before being ordained in 1616 in Cartagena’s main cathedral. Nicknamed the “esclavo de los esclavos,” he embraced the city’s sizable slave population, baptizing them, curing them when they were sick, and teaching them Catholicism. He died in his own infirmary, paralyzed with Parkinson’s, on September 9, 1654, and was canonized in 1888 by Pope Leon XIII in tandem with the papal jubilee.

Across the cathedral’s plaza lies one of the latest hot spots in a food-obsessed town, the quietly hip, teeny El Barón, where mixology is taken seriously, complete with glass-frosting machine and a handsome bartender named Waldy. Ask him to shake up an El Barón cosmopolitan (made with a blackberry-infused gin and a lime-peel curl), an ideal foil to homemade quiche and a surprisingly tasty chili con carne, two standouts on a trendy “small bites” menu. Serious cocktail crawlers might want to hike farther afield, to funky Getsemaní, where El Laboratorio’s shelves groan with fruit-infused rums (pineapple, plum, pear, coconut, and maracuya, to name just a few) while a DJ spins underneath a dimly lit, dusty chandelier and peeling plaster ceiling.

Perhaps the best restaurants in town are clustered in the pretty San Diego barrio, where lunch at La Cevichería is de rigueur (ever since it was Anthony “Bourdained” on TV); indeed, the restaurant’s citrusy, fresh-from-the-sea ceviche, micheladas, and “Pulp Fiction” (octopus) salad are nonpareil. Nearby, Calle de Las Bovedas is home to two new entries on the scene: La Comunión, where chef Charlie Otero serves upscale comida criolla, and Dante, an elegant nightspot that draws a snazzily dressed local crowd.

Around the corner, the atmospheric antiques emporium El Arcon Anticuario is chockablock with impressive furnishings and the sumptuous ironwork details (such as lizard-shaped doorknockers) found on so many of the city’s overscale, romantic entryways. Tucked behind one door, not far from the hubbub of Centro, is the Casa del Coliseo, a boutique hotel that operates more like a well-appointed home—one that just happens to be 500 years old, but with all the modern amenities for today’s sophisticated traveler. Miami-based, Colombian-born designer Juan Carlos Arcila-Duque, a co-owner, has given the airy, high-ceilinged space an enchanting, unfussy allure. Were it not for the enticements on offer in resplendent Cartagena, one might be content to read books in the double-height living area all day long, but the siren call of this ever-fascinating city is simply too powerful to fight.

A version of this article appeared in the March 2015 issue of New York Cottages & Gardens with the headline: Cartagena, Colombia.