Their tentative startup has blossomed into a thriving business. 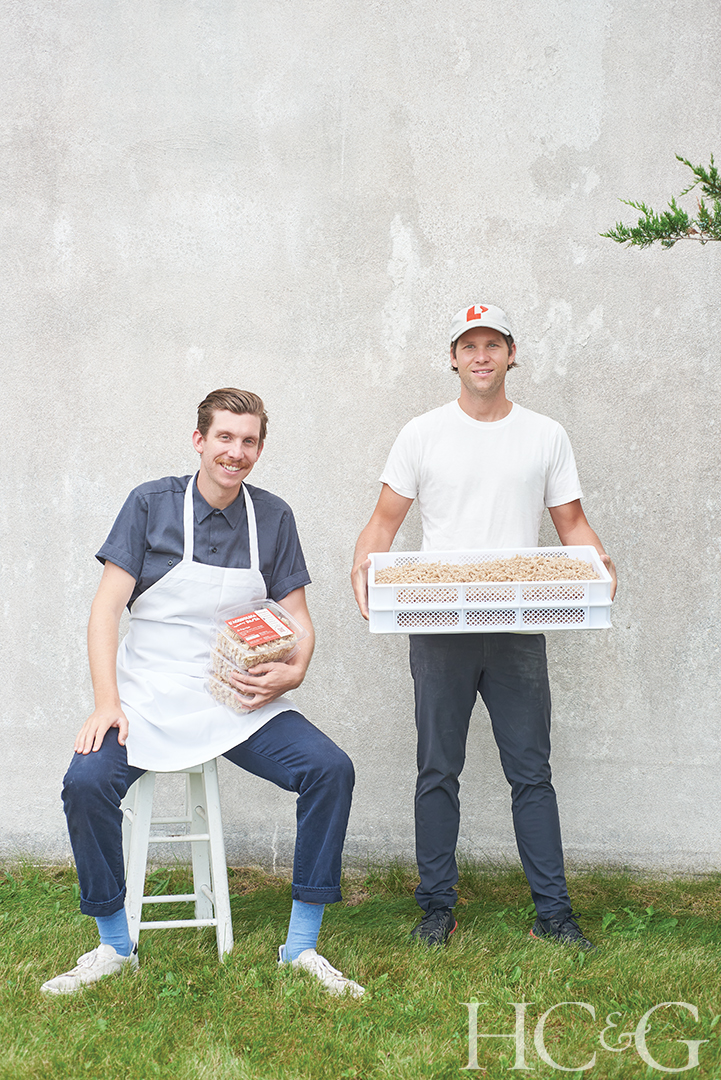 Sean (seated) and Dylan Carroll are the proprietors of L’Acquolina Pasta. Photograph by Doug Young.

Like many startups, what began as a “Let’s see what happens” project has mushroomed into a thriving business for Southampton-based brothers Dylan and Sean Carroll. In May 2020, when both found themselves out of work due to COVID-19, they set out to make air-dried, bronze-extruded pasta similar to the type perfected in Gragnano, Italy, a suburb of Naples. Their inspiration: childhood memories of cooking with their Italian immigrant grandparents in Astoria and frequent trips to visit relatives in Sicily and Lake Garda.

Initial recipe testing took place in their mother’s Southampton kitchen, which they quickly outgrew. “We drove our mother crazy,” Dylan recalls, “scattering flour and semolina everywhere. We knew it was time to start using a commercial kitchen.” 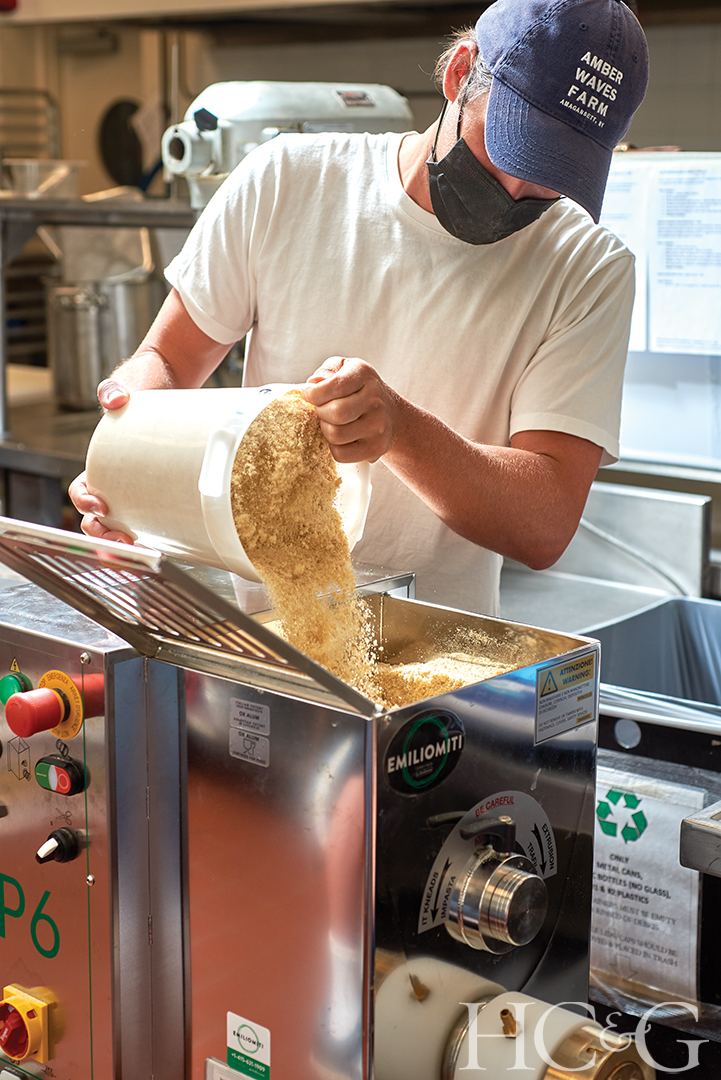 Local grains and imported Italian semolina are blended and then mixed with water till they reach the consistency of wet sand. Photograph by Doug Young.

With the help of an imported Emiliomiti la Monferrina P6 pasta machine and lots of experimentation, L’Acquolina (“mouthwatering” in Italian) was born. Today the brothers produce their small-batch pastas out of a communal kitchen at the East End Food Institute in Southampton, using local grains, particularly stone-milled whole-wheat flour, from Amagansett’s Amber Waves Farm. After blending the grains with imported Sicilian durum semolina, they add water and process it in an 80-quart Hobart mixer until it has the texture of wet sand. “We generally mix the flour for about 15 minutes,” Dylan says, “making sure there’s a consistent hydration throughout the dough.” The mixture is then poured into the pasta extruder and forced through bronze dies that create a variety of different shapes. There is no need for eggs in L’Acquolina’s vegan pasta, Dylan adds, because “of all the binding that happens as the machine forces the dough through the bronze dies. The heat and immense pressure are what make the unique shapes.” 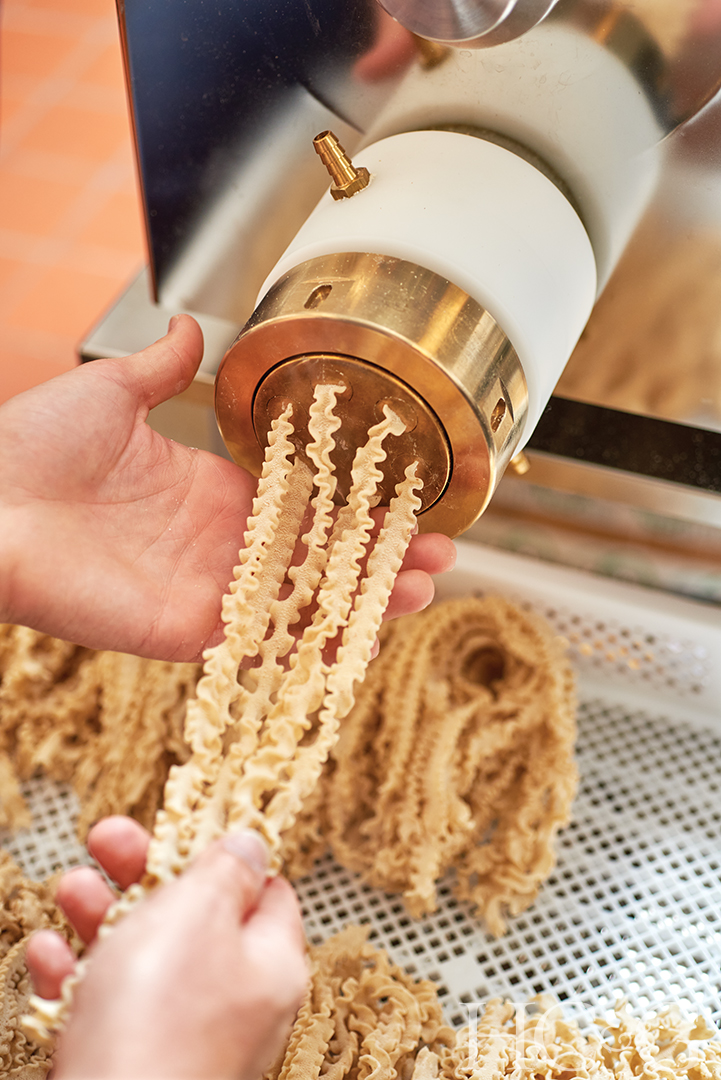 The pasta mixture is processed through an extruder fitted with bronze dies in a variety of shapes. Photograph by Doug Young.

Longer-strand pastas, such as mafalde (named for Princess Mafalda, daughter of King Victor Emmanuel III), are hand-cut as they emerge through the dies. “There’s a rhythm to the process,” explains Sean, who is also a musician, “and you have to allow for imperfections in length.” 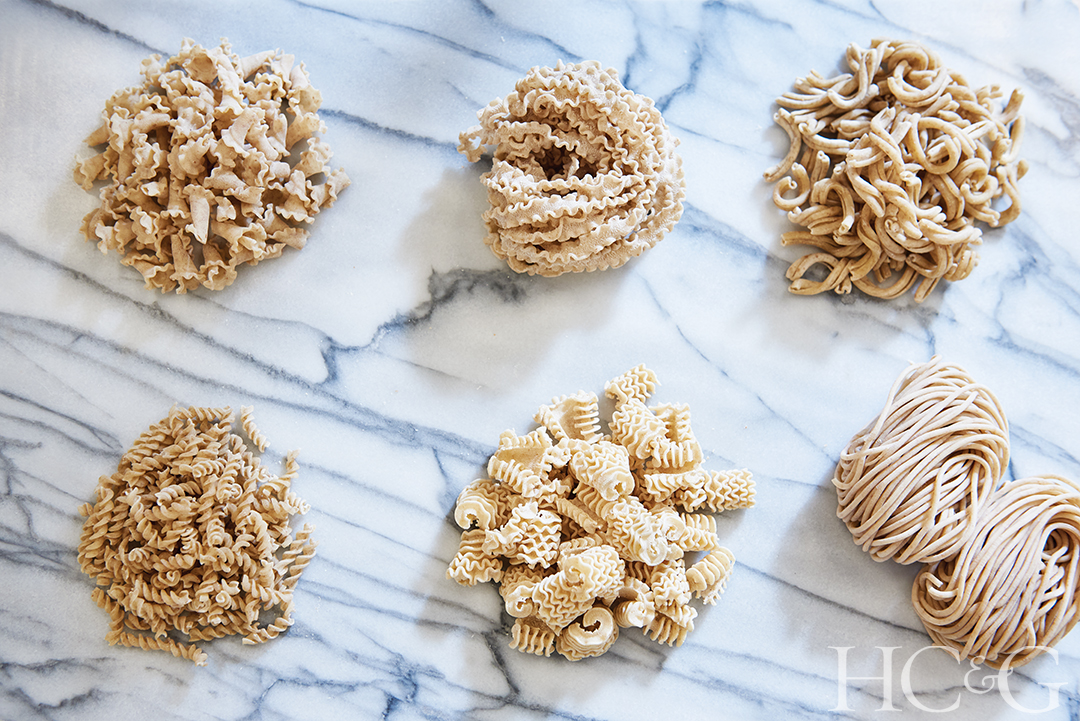 L’Acquolina’s pastas are labeled by shape and “use by” dates in compostable plant-based-plastic boxes. Photograph by Doug Young.

Each batch of dough generally produces 30 to 40 pounds of pasta, which is then packaged by the pound in compostable plant-based-plastic boxes marked with a “use by” date. In addition to being sold online and at farmers markets, L’Acquolina pastas have recently been showing up on the menus of popular Hamptons restaurants such as Nick & Toni’s and Almond. Further experiments on the horizon include pastas made with Amber Waves’s culinary rye. “It was once used as a cover crop to replenish soils,” says Dylan, “but now it’s being milled for consumption. And it’s super delicious.”

The print version of this article appears with the headline: Made in Southampton.
Subscribe to C&G

This article appears in the November/December 2021 issue of HC&G (Hamptons Cottages & Gardens).

How to Choose the Right Refrigerator for Your Kitchen