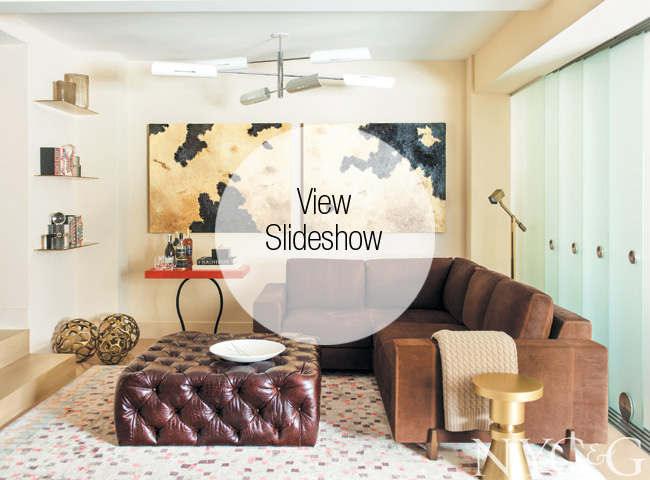 A career that takes one to international locales might sound exotic, but it isn’t always everything it’s cracked up to be. For one San Francisco couple, business as usual meant frequent travel to such far-flung destinations as the Far East and Europe, and weekends spent together became the exception, not the rule.

So they came up with a solution to improve their chances of having more than a quick dinner together between flights: They decided to buy a pied-à-terre in New York, a city whose cultural diversity and energy had always appealed to them. In the end they purchased two places, adjoining studios in an iconic Bing & Bing building in Chelsea, which they later combined.

With little time for interior design, they knew they’d need a decorator to get their second home move-in ready. “It sounds hard to believe, but they found me online,” their designer, Brett Beldock, says with a laugh. “I was only the third person they interviewed. They consulted me briefly, and that was it.” Beldock, a New York native who studied fashion at Parsons School of Design before branching into a career in decorating, knew that creating a welcoming environment for her globetrotting clients was crucial. “I wanted it to feel like one of the fabulous hotels they’re used to, but also like home.” And her clients were very clear about their needs: The 900-square-foot pad should not only be a cozy getaway for them, but also a place where their out-of-town guests would feel comfortable.

The key lay in the way Beldock devised a series of living “zones.” The scheme came easily to her, as the space was nearly a twin to her great-grandmother’s apartment, which had also been in a Bing & Bing building. “Walking in the first time was like a trip down memory lane,” she recalls, noting such classic prewar details as beamed ceilings and a sunken living room. In the newly joined studios, she created a distinct foyer, kitchen, and half-bath, then installed a wall of sliding glass panels that can be closed in the evening to separate the owners’ bedroom suite and full bath from the sitting area, where their guests often stay.

Next came the color palette. Beldock decided on a simple combo of chocolaty hues with touches of red and persimmon, plus occasional gold accents in furniture and lighting pieces. “They wanted the tonalities in the apartment to reflect their personal aesthetic—something elegant and simple, but not too austere,” she says. Probably the best move of all, however, occurred when her peripatetic clients finally moved in—permanently, having fallen in love with their new digs. They may have left their heart in San Francisco, but now New York is home.

A version of this article appeared in the May/June 2015 issue of New York Cottages & Gardens with the headline: Landing Pad.