Kemble Interiors knocks the stuffy out of a Park Avenue pad. 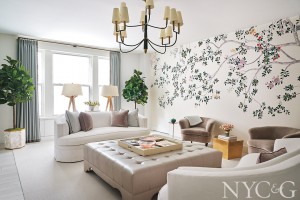 While preparing to move her husband and two kids into their new 3,500-square-foot Park Avenue residence, Durre Nabi went straight to Celerie Kemble, an old college acquaintance (their kids are now schoolmates). Nabi describes her own taste as “more minimalist and neutral” than Kemble’s trademark blend of whimsy and color, but “from the first meeting,” she says, “Celerie and Samantha [Bisger, the lead project designer] adapted the company’s style to fit my desire for a serene space.”

“Durre had already figured out the layout changes with an architect, so we were brought in to add character and voice,” Kemble comments. Stripped of “dated Park Avenue elements” like bulky moldings, fussy mantels, and dark floors, the unit was a literal clean slate.

In the living room, a hand-painted silk wall covering features a custom combination of two different de Gournay designs resulting in a resplendent asymmetrical tree motif, which creeps toward the windows as if it’s chasing the light. Other areas of the apartment are much more subtle, such as the entry, where walls are painted white in alternating flat and satin stripes. “It’s something you barely perceive until you move,” notes Kemble, “and then the space comes alive.”

As for the furnishings, the designers were able to keep a few of Nabi’s favorite pieces, including a mirror, a candelabra, and a bench from Mexico-based Casamidy, which just so happens to be a favorite source of Kemble’s. “Sometimes designers want you to throw out everything, but Celerie and Samantha were happy to reuse some of my old things,” says Nabi. “They never made me feel like what I had before wasn’t nice.” 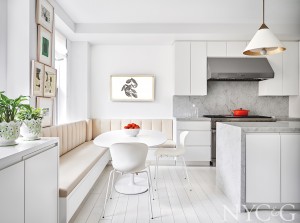 “The majority of our work is maximalist,” adds Kemble, “so it was a breath of wonderfully fresh air to look for fewer accessories that are really strong. When you don’t have as many items, you have to make sure that everything resonates and has a function.”

New kid-friendly additions include custom sofas upholstered in a white Perennials outdoor fabric in the living room and a custom banquette in the kitchen that’s covered in leather-like vinyl. “I love white,” says Nabi, “but we host play dates all the time, so our home needs to be practical.” In fact, her housewarming party included several mothers and children from school among the guests. “It was funny to see the kids ‘skating’ around this perfect white space in their socks, stopping only to grab strawberries,” recounts Kemble, who joined the festivities. “There’s a sense of airiness throughout the apartment that you don’t often experience in New York. It’s like you’re breathing something different.”

A print version of this article appeared with the headline: Airy Abode.