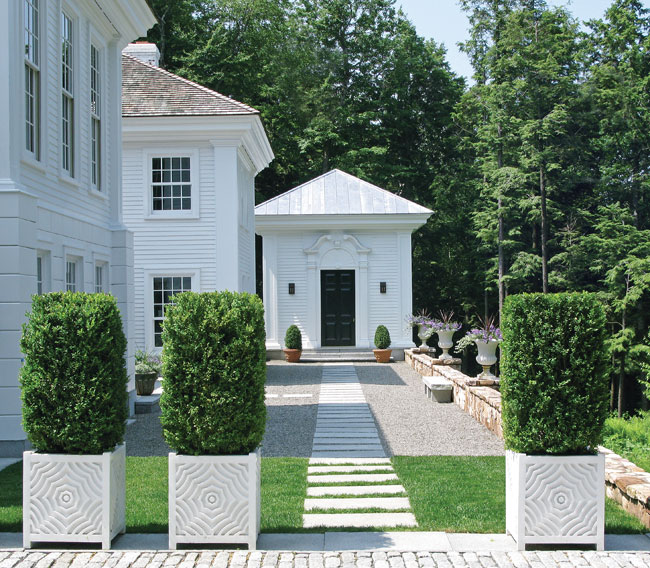 Driving through Kent, you can trace an architectural evolution
from the early Colonial houses to the more sophisticated nineteenth-century merchant houses with their Georgian and Greek Revival facades. When decorator Robert Couturier and his partner, architectural historian Jeffrey Morgan, used to take their dogs for a walk down to a nearby lake in Kent, they would pass by a gently sloping acreage of tree-filled land for sale with broad water views. This, Couturier worried, might mean that the peace and quiet of their neighboring idyllic eighteenth-century cottage would be ruined by noisy construction. So he took the sensible step of buying the property himself. A quick, Sunday afternoon sketch turned into the house we see today—a beautifully proportioned, almost neoclassical series of pavilions in the tradition of French and English eighteenth-century garden architecture, in keeping with Kent’s 270-year-old architectural history. 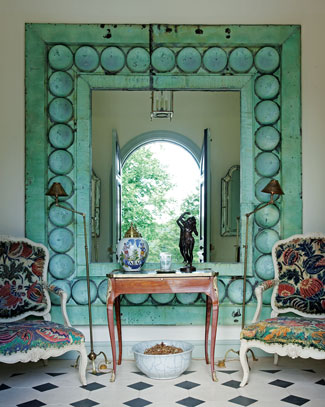 Couturier has been building the house in stages. First came a double structure of two rooms each, which were linked by a central entranceway. Then he reworked the staircase up to his high-ceilinged salon, which conveniently created an entrance to another building, a dramatic dining room, where visitors are greeted by a painting by Maurice Utrillo that hangs near a fireplace. This space has large French windows with linen curtains, embroidered by Lesage, on both sides of the room, lining it like a fabulous tent. A small boudoir-style study came next; then a perfectly proportioned, freestanding library; while the newest addition is an elegant kitchen. This is his second kitchen, which leads from the dining room, and it is really only used for entertaining.

The front of the house is designed with practical stepping-stones set in a formal arrangement in the gravel, leading to the entry, flanked by a pair of mossy urns. The private areas of the house are to the right; they include the upstairs master bedroom, furnished in an Anglo-American style, which has dramatic views of the lake through a forest of pine trees. Downstairs, a small Louis XVI–style sitting room has a pair of armchairs from Marie Antoinette’s bathroom at the Château de Fontainebleau.

The rest of the house is reached through the original kitchen-living room, which is 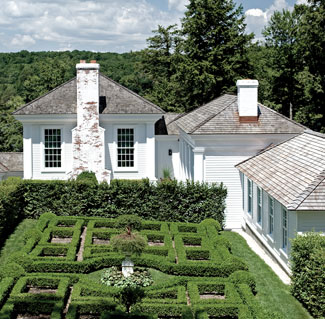 decorated with early English furniture surrounding a large, broad fireplace. Upstairs, Couturier has created a 19-foot-high formal salon with priceless pieces of furniture, including a French Louis XIV lit, which is overlooked by a magnificent seventeenth-century portrait of Lady Elizabeth Dormer by Gilbert Jackson. Scattered around the room are a pair of low benches by Jean-Michel Frank, which serve as coffee tables, and one of his famous marquetry straw screens. In the corner sits an unusual eighteenth-century desk by cabinetmaker Canabas, while a huge seventeenth-century Alsatian armoire anchors the opposing wall.

The formal garden has been designed as a series of boxwood parterres, which are terraced up the back slope behind the house. These give the space year-round structure, and with the evergreen pine trees in front, Couturier’s garden manages to transcend the seasons.