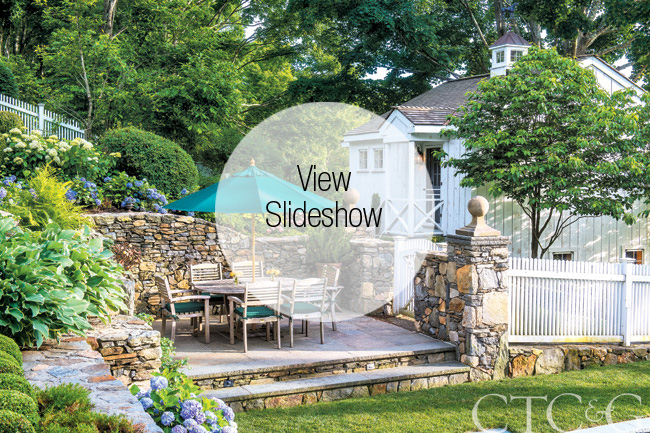 They fell for the front porch. Granted, it was attached to the world’s quaintest retro farmhouse. But for Mark Drendel, that ringside seat to a hayfield framing the Shepaug River brought him back to his childhood on his family’s Tennessee farm. He couldn’t resist the relaxed allure of rocking chairs and a porch swing. The full ambiance of the one-acre property clinched the deal when Drendel and his partner, Chad Conway, bought the Roxbury home in 2002.

Prior to that, their weekend escape of choice was Fire Island. “But when we saw Nicholas in the future, we wanted to find a family place,” explains Drendel. When their son, Nicholas, was a year old, they started looking in earnest. They put a bid on the 1920s Sears Roebuck kit house on the same day that they saw it. Not long after, they were ordering those rocking chairs. “I decided that getting them from Cracker Barrel only seemed appropriate,” says Drendel.

Initially, developing the landscape beyond playground grass was nowhere on the horizon. In fact, just keeping the Litchfield County house became something of a burden while raising Nicholas and growing Canine Styles, their New York City–based stores. When friends came to visit, however, the couple invariably treated them on a scenic drive along the river. At the farthest point was the home of Geraldine Stutz, president of the iconic New York City Henri Bendel store. All they could see from the road was the entry drive with graceful plantings beside a waterfall. When the house came up for sale, they considered a purchase and were first in line to take a look. That was when they received a full introduction to landscape designer Russell Page’s work.

Ultimately, another bidder got Stutz’s property. But Drendell remained inspired by Page, particularly his clean lines and textural counterpoint of edging, hedging and sharp hardscape, along with his hallmark style element: a water feature. Instead of a rill, Drendel decided on a more pragmatic swimming pool to echo the river’s reflection. The challenge was taming the property’s severe vertical slope through the use of terraces.

A built-in terrace of sorts already existed: A stone wall shouldered the hill, probably the remnants of a barn foundation. That wall—ensconced in climbing hydrangea—was used to back a mezzanine level above the pool wide enough to fit a line of lounge chairs. The reclining kickline enjoys a commanding view of the pool a couple of steps down, while New Dawn roses climb the wall below. From there, it was a matter of tucking in alcoves—each with its own purpose. A dining loge is large enough to contain a table and chairs with sufficient room to move around. And footholds were cut into a hillside for an orchard of kouza dogwoods. Tracey Young of the Elemental Garden in Woodbury furnished the antique finials and urns to serve as focal points while helping with the original layout. David Bergman of DWB Botanical Design helps implement Drendel’s vision, serving as horticultural expert and providing meticulous maintenance. He sculpts hedges of which Russell Page would approve: Razor-sharp, they etch curvaceous lines in the landscape, subtly telling your feet where to go.

What could have been the landscape’s Waterloo was the road wrapping the triangular property on two sides. Bergman double-hedged the upper perimeter using salt-tolerant Thuja Green Giant and barberry. The double buffer eliminates street noise so effectively that they increased the garden into paths closer to the road, climbing up to a pet cemetery. The stone bench in that newly restive spot provides a view to the river and the garden.

Recently, they added a whitewashed barn/guest house flanked by Iceberg roses. Hydrangeas do so well on the adjacent hill that Drendel created a side garden solely of Endless Summer, Limelight, Annabelle and various lacecaps. Behind the house, Bergman orchestrated a rhapsody in blue border to blossom from early alliums through to monkshood and phlox (Blue Paradise has proved blessedly mildew resistant) late in the year.

Even though it is surrounded by all of the appointments of a stately home, the farmhouse has retained its humble appeal. While they rock on the front porch watching the river roll by, Drendel and Conway are exactly where they want to be, enjoying their acre of tranquility.

A version of this article appeared in the June 2015 issue of Connecticut Cottages & Gardens with the headline: Ripple Effect.