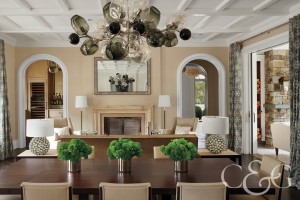 It’s considered a compliment in Southport to have your brand new house characterized as old. Visitors coursing the hamlet’s expansive historic district will likely stop to admire a classic Shingle-style residence that appears to have been part of the townscape for generations- but, in fact was only recently completed by architect Oliver Cope. “Despite initial concern from the historic district community, the house fits in seamlessly,” says Cope.

Cope admits that the design approval from those governing the district required “doing lots of homework.” Indeed, because the people there are so invested in their community-in ensuring that any new residences be sympathetic additions to the array of period styles that line the streets- the process of okaying a design can be a lengthy one. “We embraced the process,” says Cope. “We started early, and it was completely worth doing because it resulted in a better home.”

The origins of the house, though, began with enlightened clients, Gene Gorab, who works in real estate development, and his with, Suzanne. “Building spaces is something the client enjoys and knows how to do really well,” says Eve Robinson, the project’s interior designer.

Both Cope and Robinson, whose collaboration resulted in what Cope calls “a mutual admiration society,” acknowledge that they were entrusted with designing a house that needs to be both traditional in feel but decidedly “today” in how it functioned. 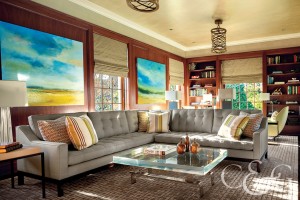 One of the nice things about the Shingle-style is that it’s a proto-modern architectural style that allows for flexibility,” says Cope. “It’s about putting rooms where people want them, rather than where those rooms were once thought they had to be positioned.”

Meanwhile, Robinson was aware that the client wanted everything inside to be “fresh and modern” The couple entertain frequently and one directive to both Cope and Robinson was to create a living room able to accommodate groups. The architect and interior designer fashioned a great room with a boldly articulated coffered ceiling. The large space has two distinct and intimate seating areas, each with its own fireplace. 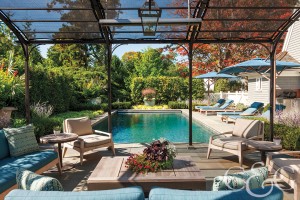 Robinson emphasizes, “It was important to combine vintage and contemporary pieces as a way to create interiors that would look as new in 10 years as they do right now.” One of the designer’s signature motifs is her use of novel lighting fixtures, some of which assume the presence of contemporary sculpture. “Lighting is like jewelry that you choose to adorn in a space,” notes Robinson.

Since the client makes his living conceiving and building spaces, Robinson was especially moved by a note he sent to her once the project was complete. “I am the only one here at the house [now] and was just wandering around taking it all in,” wrote the homeowner. “I have to say that this is one of the most beautiful homes I have ever seen. It all works so elegantly together, and I wanted to than you for creating it for us.”

The print version of this article appeared with the headline: A New Age of Elegance.

This article appears in the May 2020 issue of CTC&G (Connecticut Cottages & Gardens).