A Step Back in Time

In New Milford, Susan and Marcus Hewitt took a former ship captain’s home and transformed it into the “new” old house of their dreams 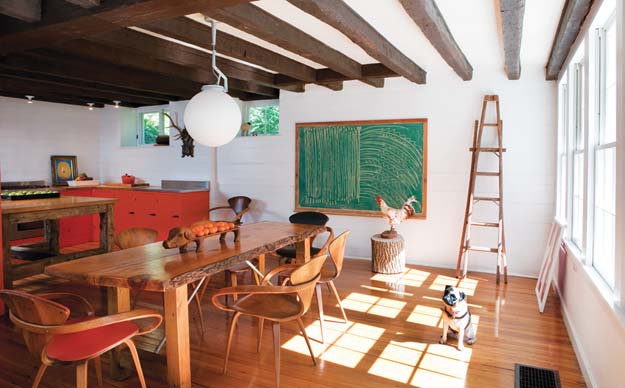 IN THE FILM CLASSIC, “Mr. Blandings Builds His Dream House,” Cary Grant and Myrna Loy (the Blandings) anoint New Milford, Connecticut as the optimal locale to build a center hall Colonial—their idea of architectural perfection—and to escape the daily grind of Manhattan. The year is 1948.

Fast forward to 2001. Susan and Marcus Hewitt, also looking to flee the stresses of city life—in their case, prompted by the events of 9/11—seek refuge in the same quiet enclave. But the Hewitts, both graphic designers and self-proclaimed modernists, had anything but Connecticut’s iconic home style in mind. While they imagined themselves settling into something more in keeping with the contemporary aesthetic of their SoHo loft, even they were surprised when they fell in love with a wood and stone residence built in 1792. The home of a retired sea captain, it appeared staunchly traditional on the outside; inside told a very different story. With its clean lines, simple beam work and original mahogany floors, the interior boasted a decidedly modern sensibility. 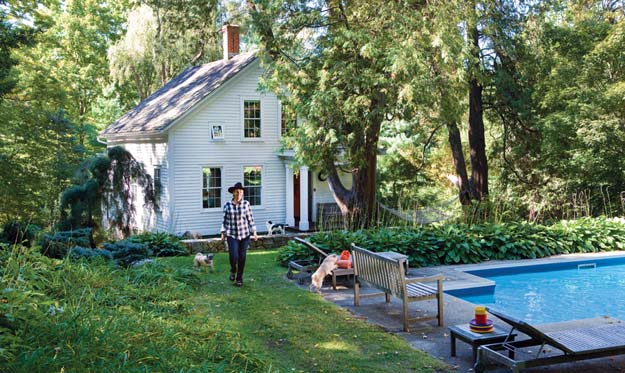 “Typically a house like this would have been added onto many times but that wasn’t true in this case,” says Susan. “We couldn’t get over the fact that it was 200 years old. It was so simple and modern with an economy of space—just like a ship, with discreet cupboards in every room.”

One of the couple’s primary goals was to purchase a property they could restore on their own. The 2,000-square-foot house and three out buildings—a guesthouse, pool house and barn, beautifully sited on two mature acres—seemed to fit all their criteria. “Coming from our loft in SoHo it felt like a big house but it took almost four years of working on it every weekend to get it into shape,” Marcus says. Adds Susan, “It was very run down. There were no locks on the doors, no walkways and the kitchen was totally dysfunctional.”

Early on the couple established three design themes. “White, minimal and nautical,” says Susan, the latter in homage to the original owner. The Hewitts met their first objective by painting almost everything except the kids’ rooms—they have two teenagers—a crisp white. “You can see the greens in the garden and the blue pool through every window in the house, which adds a surprising amount of color,” she says.

Structurally, the only exterior changes were to the rooftops of the guest and pool houses, which received steeper pitches to match the main house. Inside, they added windows and centered doors to restore a sense of symmetry. “We got rid of detailing and molding wherever we could,” says Marcus. “It was Susan’s idea to take down the upper cabinets in the kitchen, which not only simplified things, it made the room feel much more spacious.” He drew inspiration from the original woodwork when designing new kitchen cabinets and built-ins for the master bedroom.

Mimicking the ship-shape cabinetry was one way the couple honored the home’s nautical roots. Refurbishing the existing spiral staircase, which has an 18th-century ship’s mast running through it, was another. “We wanted to rev up the nautical theme without getting corny,” says Susan, who added circular Luceplan lighting to the porch for a contemporary maritime touch.

When it came to furnishings, the couple worked hard to avoid falling into what Susan calls the “mid-century modern trap.” “The design style has become so common, it’s not exciting anymore,” says Susan, who admits that many of their things, such as the Cherner kitchen chairs and LeCorbusier living room furniture, are straight from that era. “To mix things up, we started going to estate sales and flea markets to find more eclectic pieces like a pair of African work stools.”

Also breaking the mid-century mold are the ram and boar heads—part of a larger collection—that hang on the living room walls, and the orange pigment that appears on the kitchen cabinets and select leather furnishings. “I think I was defying the rigidity associated with classic Connecticut design,” says Susan about the bold color choice. “It also makes our kitchen the site of fun, dynamic parties. No one ever wants to leave there.”

After several years of living in the centuries-old space, Susan admits her personal aesthetic has shifted. “I used to be exclusively a modernist but moving to the country has changed that. Now I’m an oldist,” she says. “I love living in an old house and think the combination of my sterile furnishings with the warmth of this ancient place really works.”