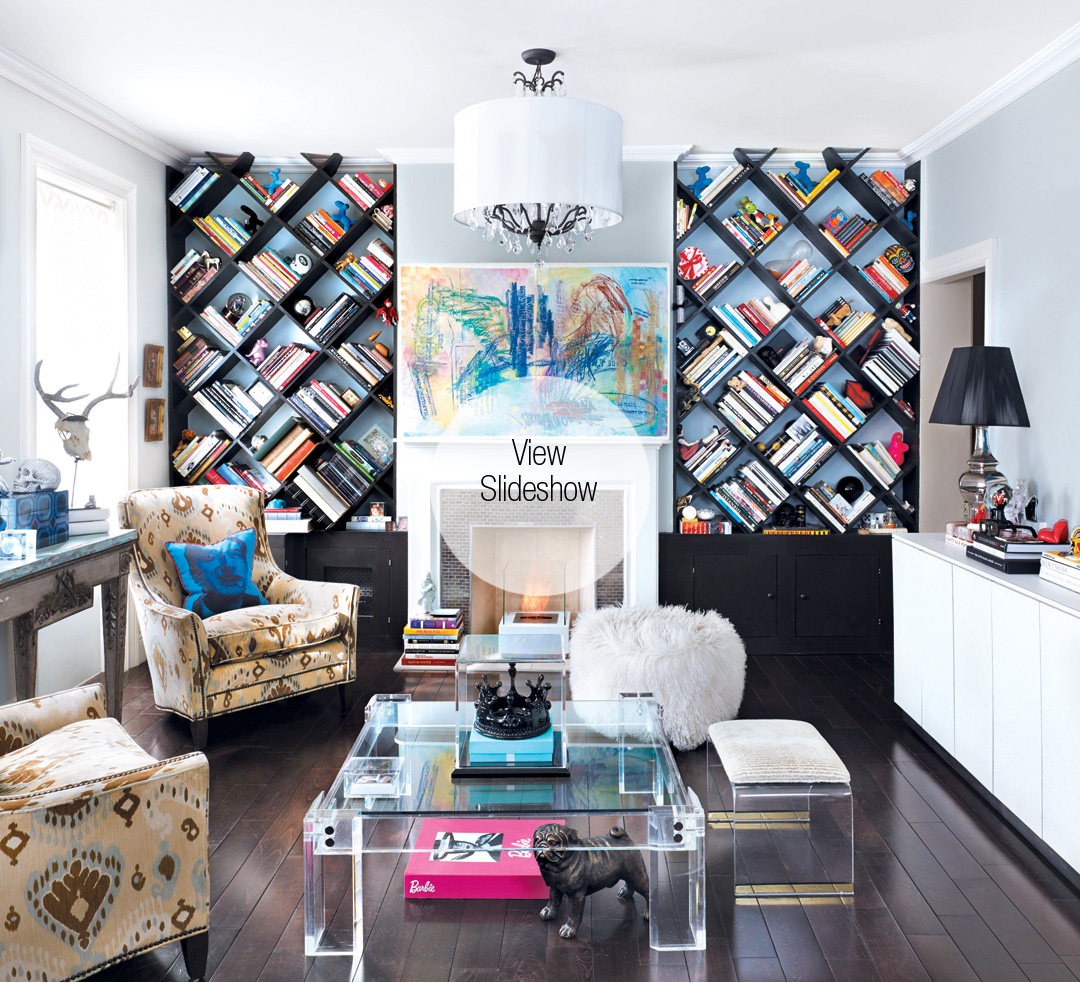 For fashion editor and new-media maven Cricket Burns, life is a mix of color, memories, Mick Jagger, and Chanel. A veteran of magazine publishing, Burns has spent her career sniffing out style on a daily basis. New York City has been her muse, and her home, since she took her first post-college job, at Harper’s Bazaar, nearly three decades ago. When it came to redoing her present digs—a three-bedroom apartment in a century-old building that she shares with her filmmaker husband, Richard, and their daughters, Manzi, 17, and India, 14—Burns was all too happy to paint it with her characteristic broad brushstrokes.

When the Burnses ventured out three years ago to find a new place, they sought something that would be the right fit for both their family and their passions–namely art, music, and decor. They knew where they wanted to live—“In Carnegie Hill, only,” says Burns of the neighborhood where her girls attend school—and landed a sweet pad tucked into a quiet, leafy corner near Central Park. A woman had owned the apartment for years—and it showed. “It had peach shag carpeting,” Burns recalls. “When we came to see it, my younger daughter burst into tears and said, ‘We’re not going to live here, are we?’” Burns, being a DIY girl, saw its great bones and was confident she could mold it into the ideal abode.

It’s that industriousness that helped her climb the ranks in a very competitive industry: A true fashionista, Burns has been an editor at Seventeen, Avenue, Quest, and Scene, in addition to Harper’s Bazaar. She caught the fashion bug from her mother, who regularly turned herself out in YSL, Geoffrey Beene, and Bill Blass. “My mother had a huge walk-in closet with rows of gowns,” Burns remembers. “I’d hang out there when she got dressed for black-ties.”

Burns’s next venture, though, isn’t fashion. She is taking a leap into the digital world with CricketsCrush.com, an e-commerce consignment site for home decor, furnishings, and art that she’s launching this month in partnership with her husband. Fully curated by her, the site will feature new and vintage pieces, along with interviews with decorators. “It will be completely unique and cool,” she says.

The same sentiment applies to the family’s apartment. There are formal touches, such as the parlor grand piano in the living room (Burns and her daughters play) and dazzling chandeliers hanging everywhere, and informal, like Burns’s assemblage of milk glass and white china in the green apple–accented kitchen and the passel of porcelain pugs adorning a chinoiserie étagère. Probably the most prized possession for Burns is her collection of Chanel, including one-of-a-kind, runway, and vintage pieces, as well as accessories. Like mother, like daughter: Burns’s walk-in closet is filled with fabulous garments, bags, and shoes. “It’s my little slice of heaven,” she says.

A smattering of vibrant paint colors ties each room together. The ceiling in India’s room pops with Benjamin Moore’s Hot Lips, almost a fuchsia, which is reigned in with Calypso Orange on the crown molding. Farrow & Ball’s Borrowed Light, in the sun-flooded living room, changes from cornflower blue to a flannel gray over the course of the day, while alternating thick stripes of the company’s Matchstick and James White soften the long L-shaped entry hall (“They prevent it from looking like a bowling alley,” Burns says). The tray ceiling above, however, is painted with silver radiator paint, for a surprising, contrasting blast. At the end of the hall, Burns has hung a portrait of her pop culture hero, Mick Jagger, looking typically jazzed. (The photo was taken by Dave Stewart, Annie Lennox’s Eurythmics partner.) “Mick is my guy,” she says of the lead singer for the Rolling Stones, a band she admits to having seen more times than she can count. Perhaps you could even call her a groupie, though at home, she’s one of a kind.

A version of this article appeared in the April 2014 issue of New York Cottages & Gardens with the headline: Marine Layers.

This article appears in the April 2014 issue of NYC&G (New York Cottages & Gardens).